The Elizabeth Blackwell Herb Garden at Chawton House Library has been open to visitors for a year. Friday 14 July 2017 marks the end of its first year of opening.

At the end of a long drive way is Chawton House Library, looking from the outside much as it would have when Jane Austen visited her brother Edward. This year – 2017 – marks the 200th anniversary of the death of Jane Austen, who lived in the village of Chawton in a cottage on her brother’s estate, rather than at the ‘Great House’. 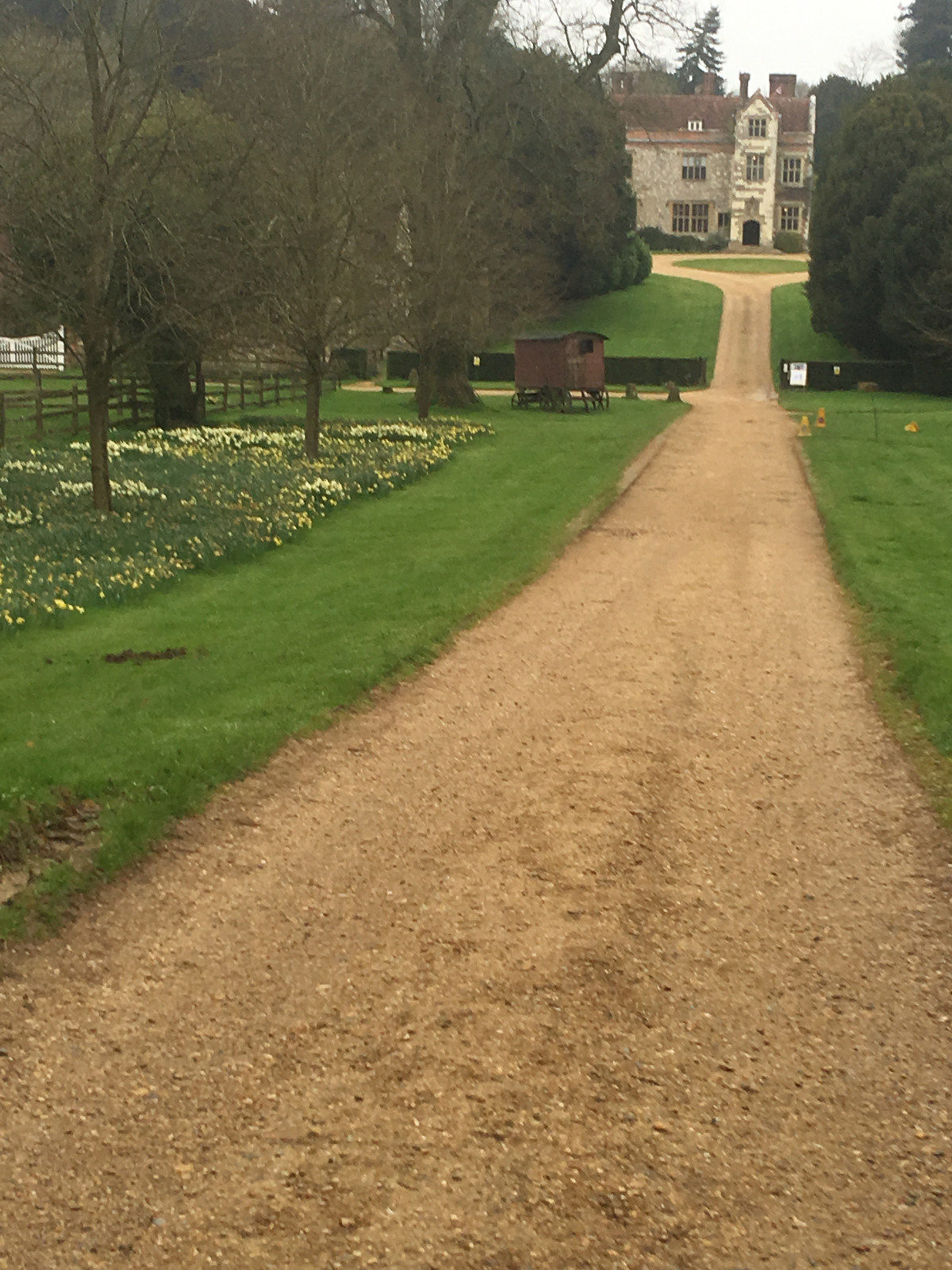 Chawton House Library is a fascinating place, housing over 10,000 works by women writers from 1600–1830, including the work of Jane Austen, well-known as a novelist in her time. Her mother and sister are buried in the old churchyard on the estate. Jane is buried in Winchester Cathedral and there is a special anniversary evensong service taking place there on 18 July (www.winchester-cathedral.org.uk) 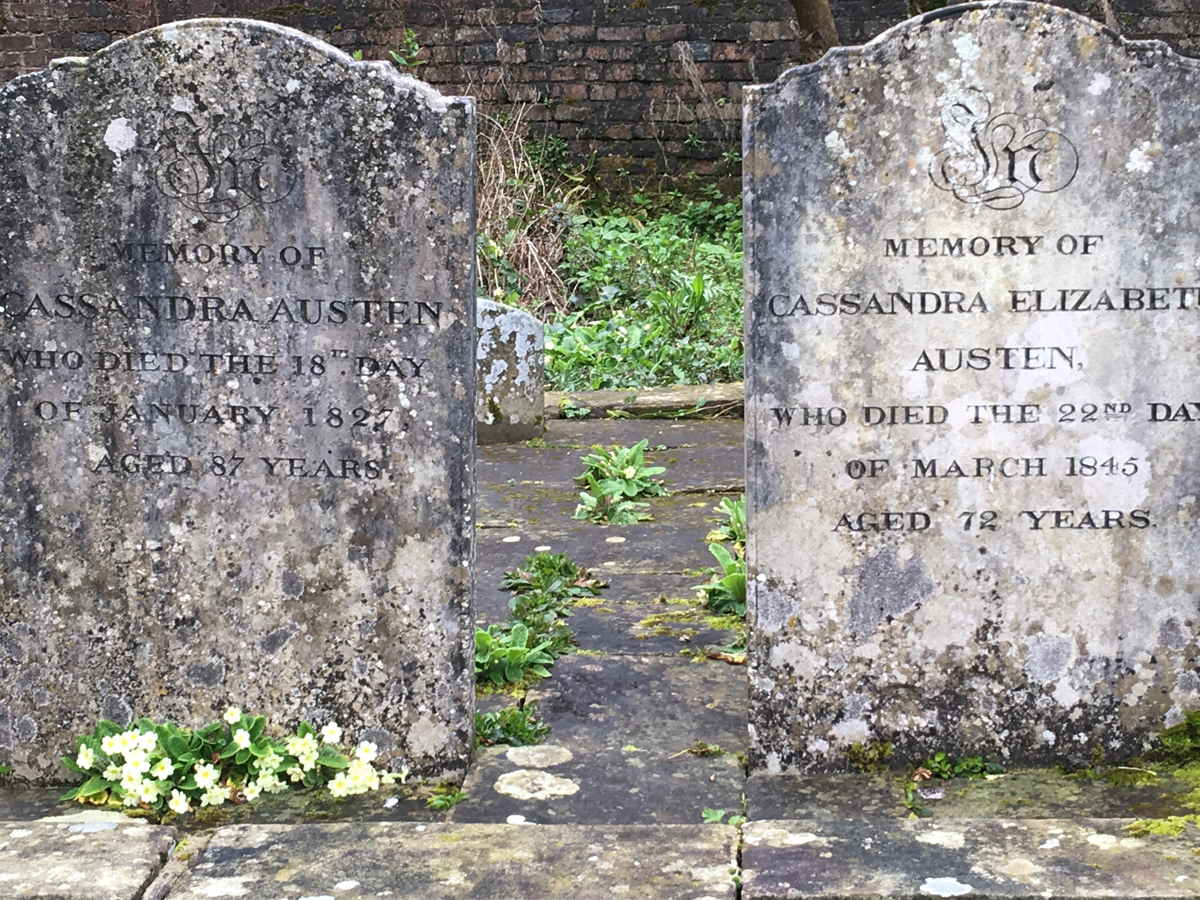 The tombstones of Jane Austen’s mother and sister in the old churchyard at Chawton House.

As I walked up the long drive to the house on my visit earlier this year in March, I felt a frisson of connection with the past. I am happy to say that apart from the fact that my visit was not a ‘dawdle’, Jane’s words to her sister Cassandra Austen in 1814, resonated: “I went up to the Great House between 3 & 4, & dawdled away an hour very comfortably…”

I was taken on a tour, not dissimilar to the early morning Estate Rambles that Garden Manager Andrew Bentley regularly leads. We walked through the wilderness, saw the ‘ha-ha’ and the additions made by Jane’s brother Edward Austen (later Knight). These include the shrubberies and the parkland. He also added the walled kitchen garden and it was here that the main purpose for my visit was to be found.

In a section of the walled kitchen garden the relatively young herb garden was just beginning to spring into life. Andrew, responsible for its design and development, walked me round and explained how it had come into being. 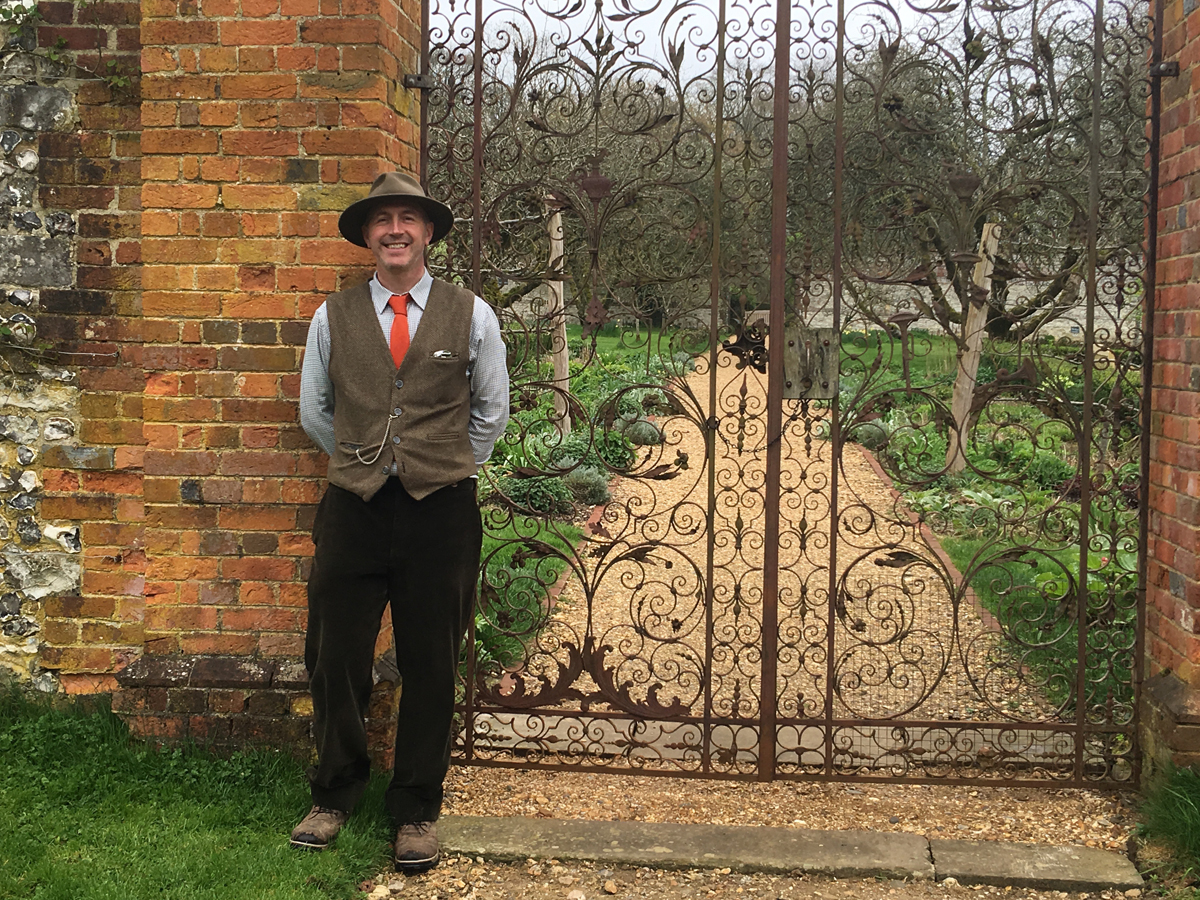 Andrew’s inspiration for the herb garden within the old walled garden at Chawton came from Elizabeth Blackwell’s book, A Curious Herbal, held in the Chawton House Library collection. Its full title is A curious herbal, containing five hundred cuts, of the most useful plants, which are now used in physick. 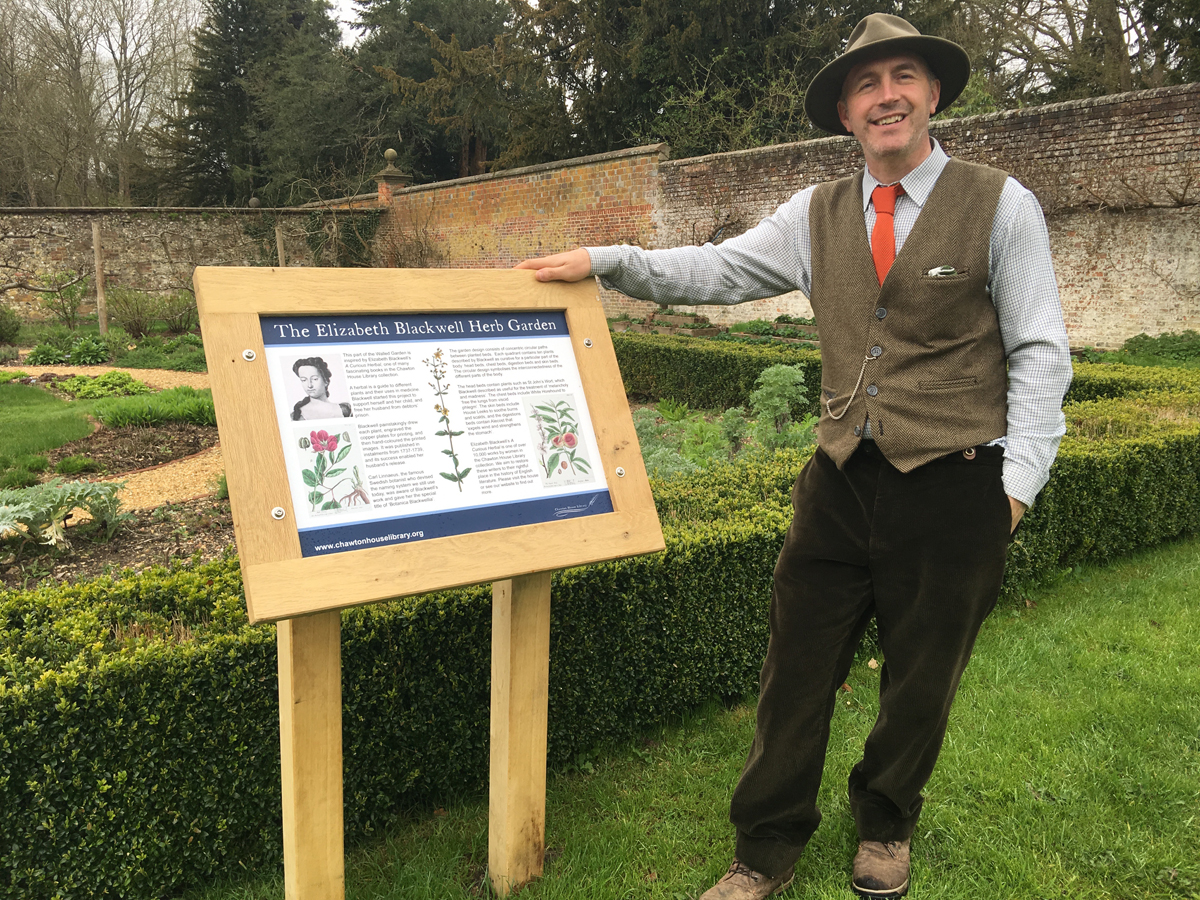 Andrew with the interpretation board that introduces Elizabeth Blackwell and explains how her work has inspired the herb garden’s design.

The design has a circular scheme with concentric curved and gravelled paths between circular beds. There are four straight lawn paths that lead to a central grass circle with a wooden seat at the centre.

Each of the quadrants is designed to hold ten plants that Elizabeth Blackwell included as medicinal plants useful for treating a particular part of the body. Andrew explained that they are for head, chest, digestion and skin. His circular design is intended to show the interconnectedness of all parts of our bodies. 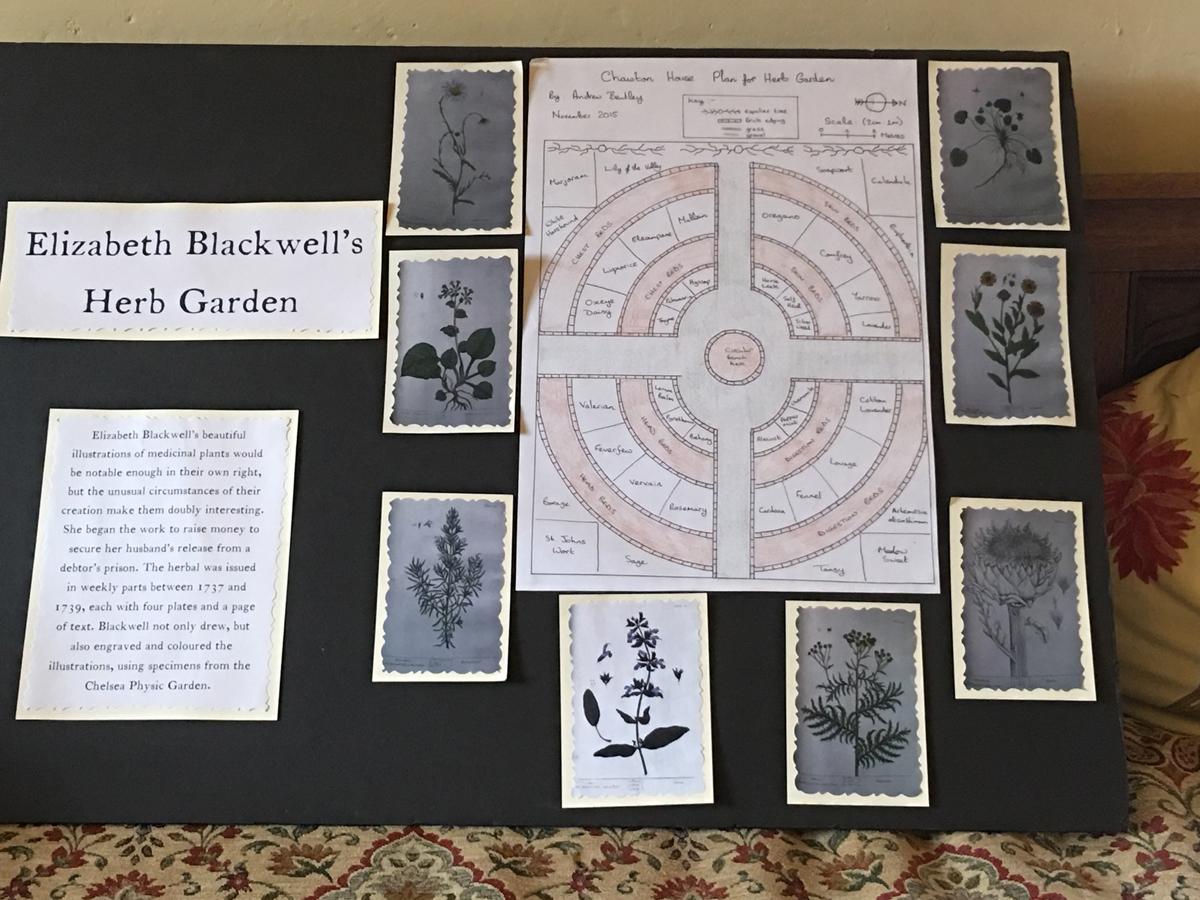 Andrew Bentley’s plan (drawn in November 2015) shows the circular scheme for the beds within each of the garden’s quadrants. 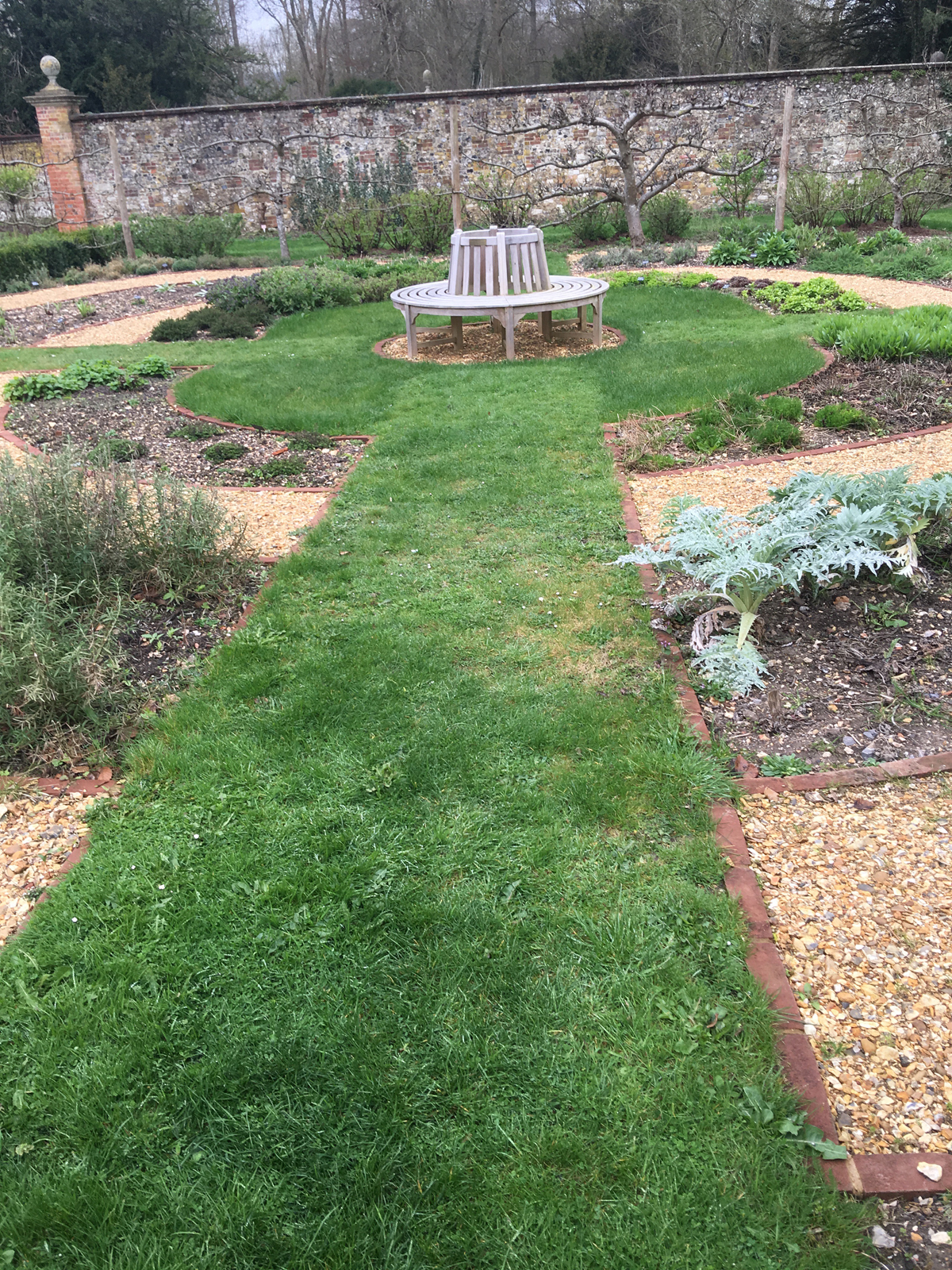 Four grass paths lead to the central grass circle and divide the garden into four quadrants.

Elizabeth Blackwell’s book is a guide to medicinal plants and their uses and was her way of raising funds to support herself and her child, and to free her husband from the debtors’ prison.

She drew each plant from specimens held at the Chelsea Physic Garden in London. Then she engraved the copper plates for printing and finally hand-coloured the printed images. A Curious Herbal was published in instalments from 1737 to 1739. It was a huge success and the money raised meant release from the debtors’ prison for her husband. It took years to produce and the completed two volumes sold for the then considerable sum of £5. 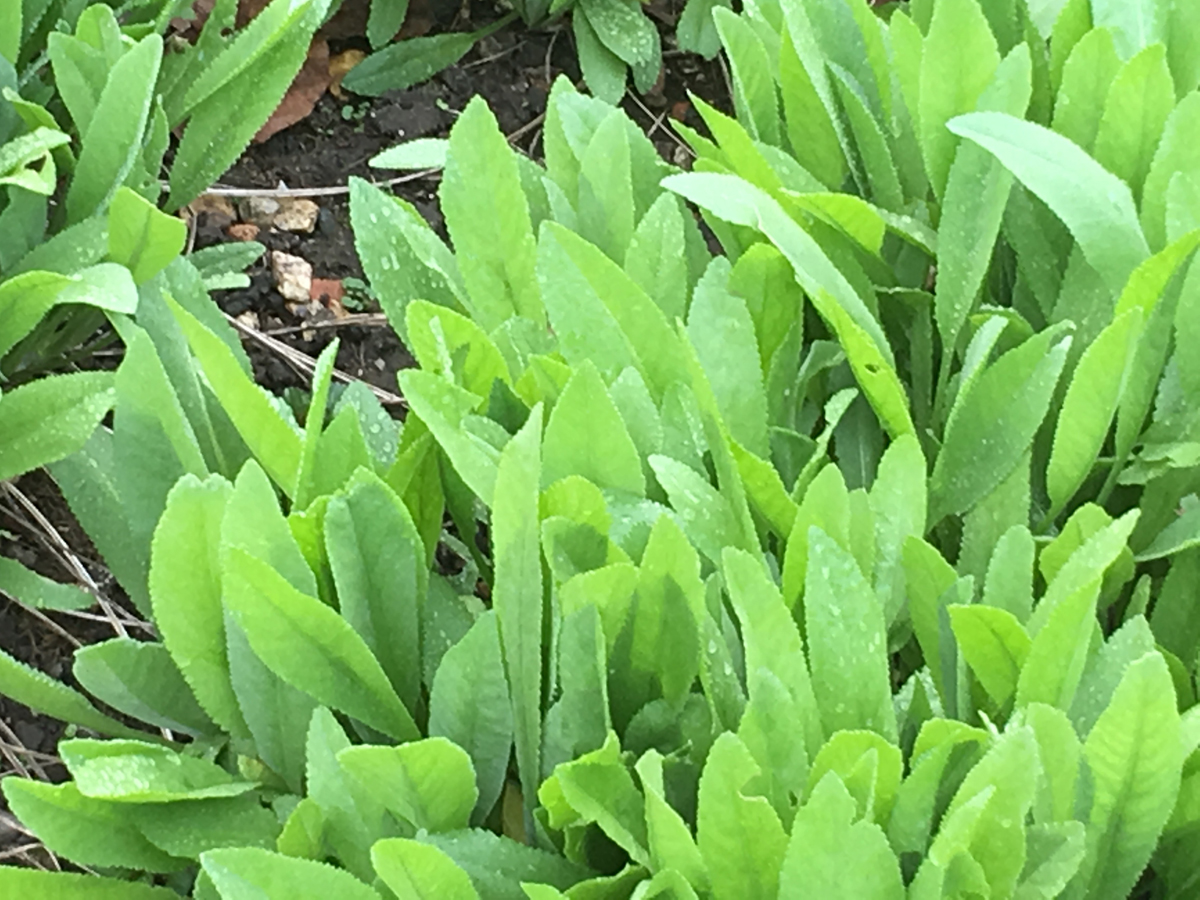 Andrew explained that alecost is in the digestions bed because “it expels wind and strengthens the stomach’. 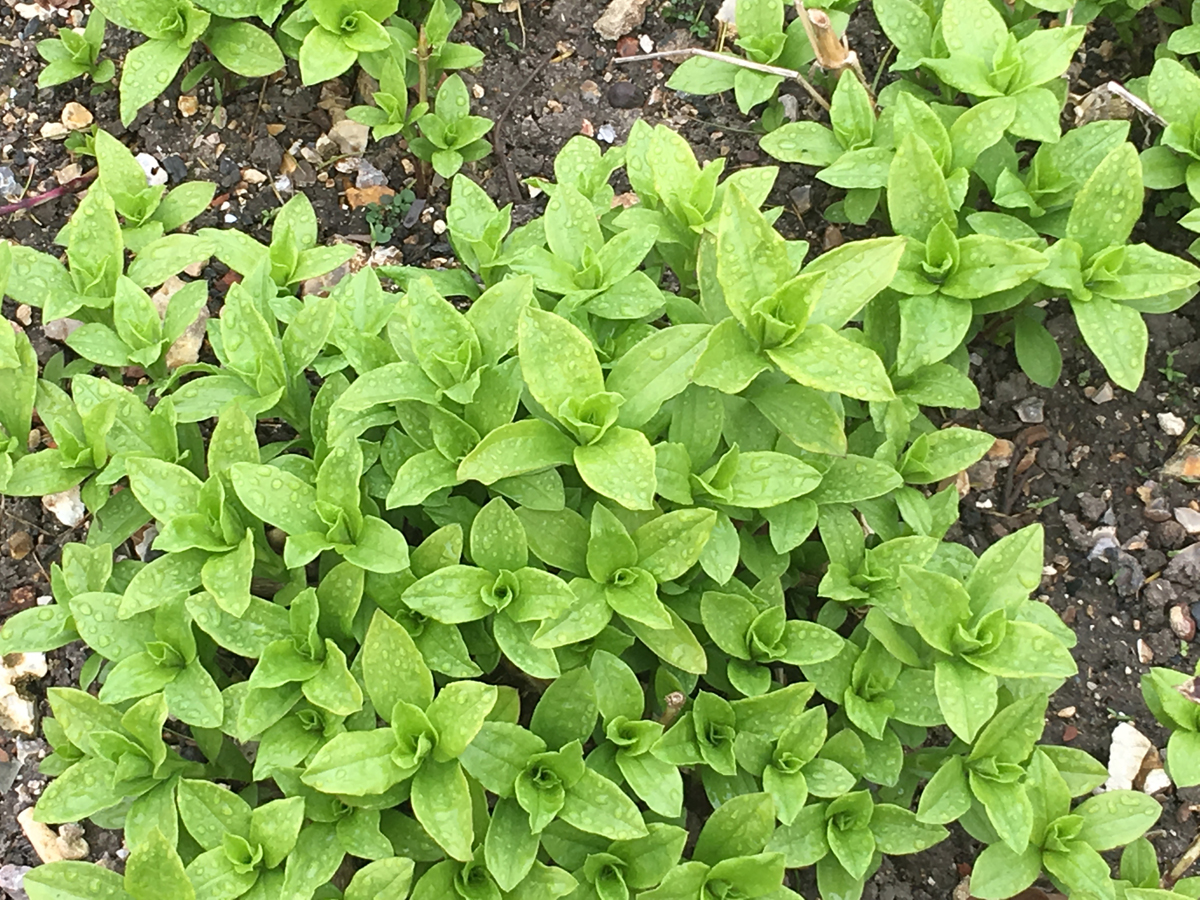 Soapwort is in the skin bed, since its soapy attributes make it perfect for bathing and cleansing.

I was so fortunate that Andrew arranged with the Librarian for me to see the two volumes of Elizabeth Blackwell’s work and even more thrilled that I was given permission to photograph the pages that were open for me to see.

The hand-coloured images of echium and vipers bugloss are minutely detailed and the colour seems as fresh as the day of publication. 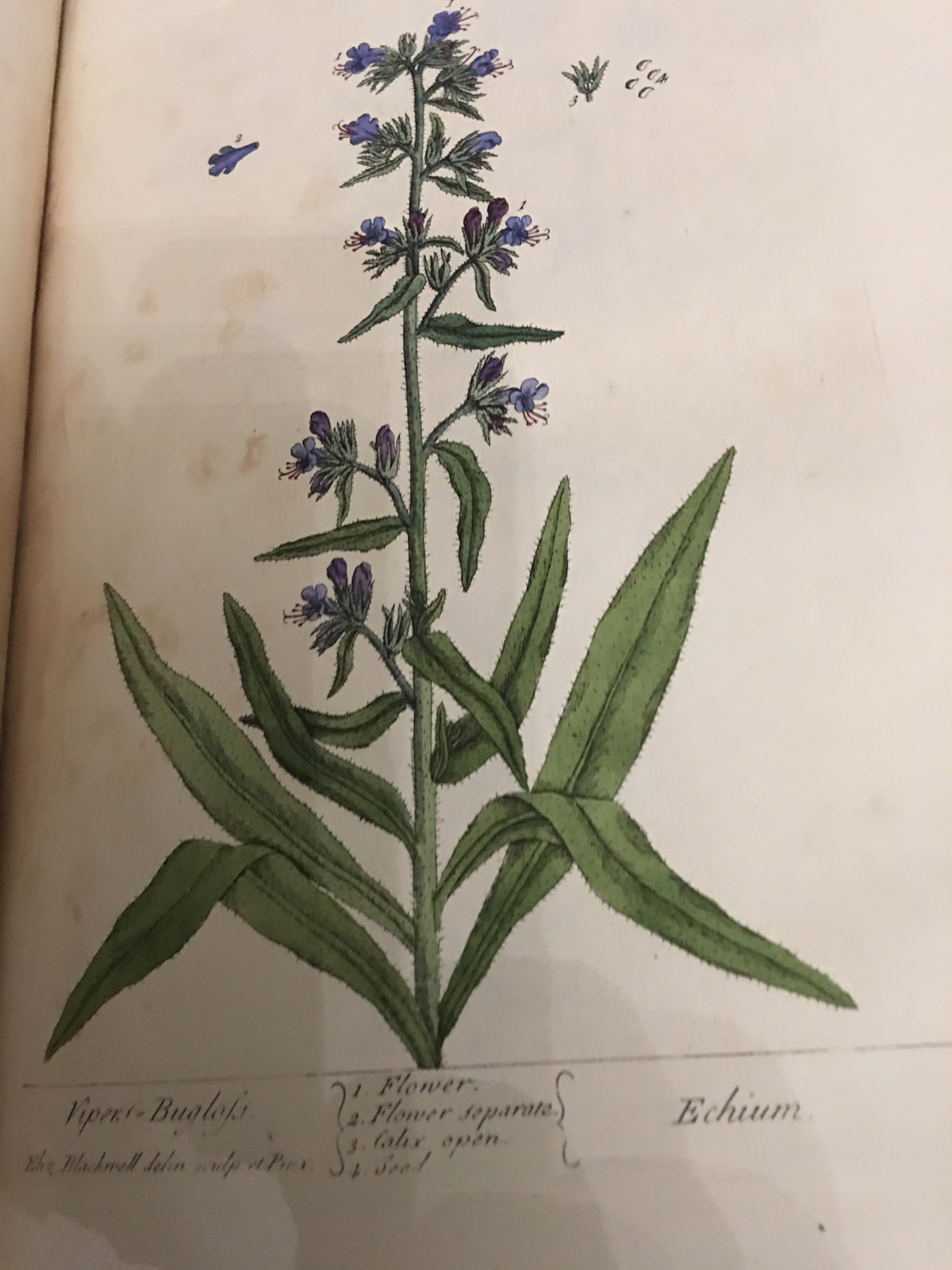 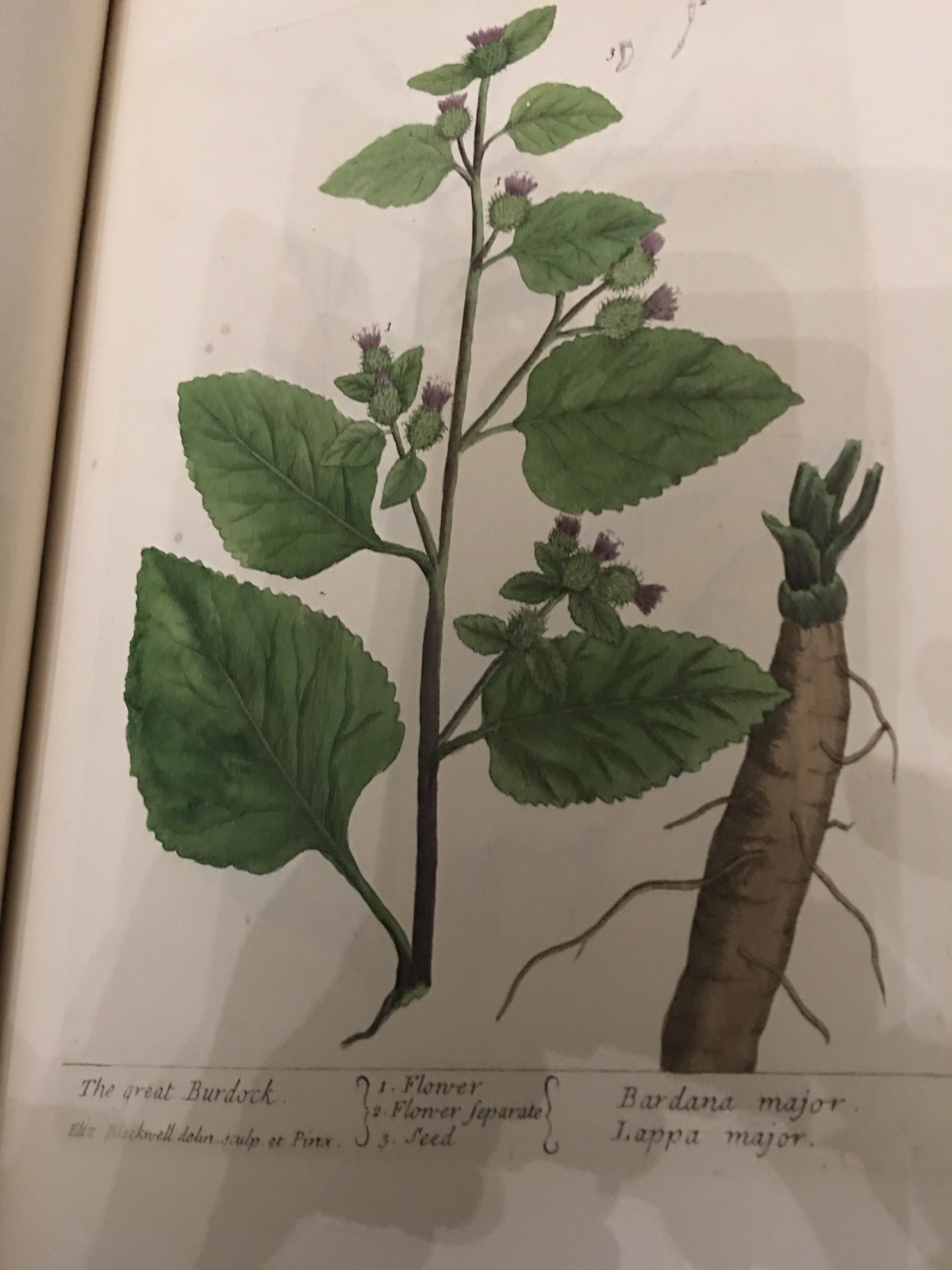 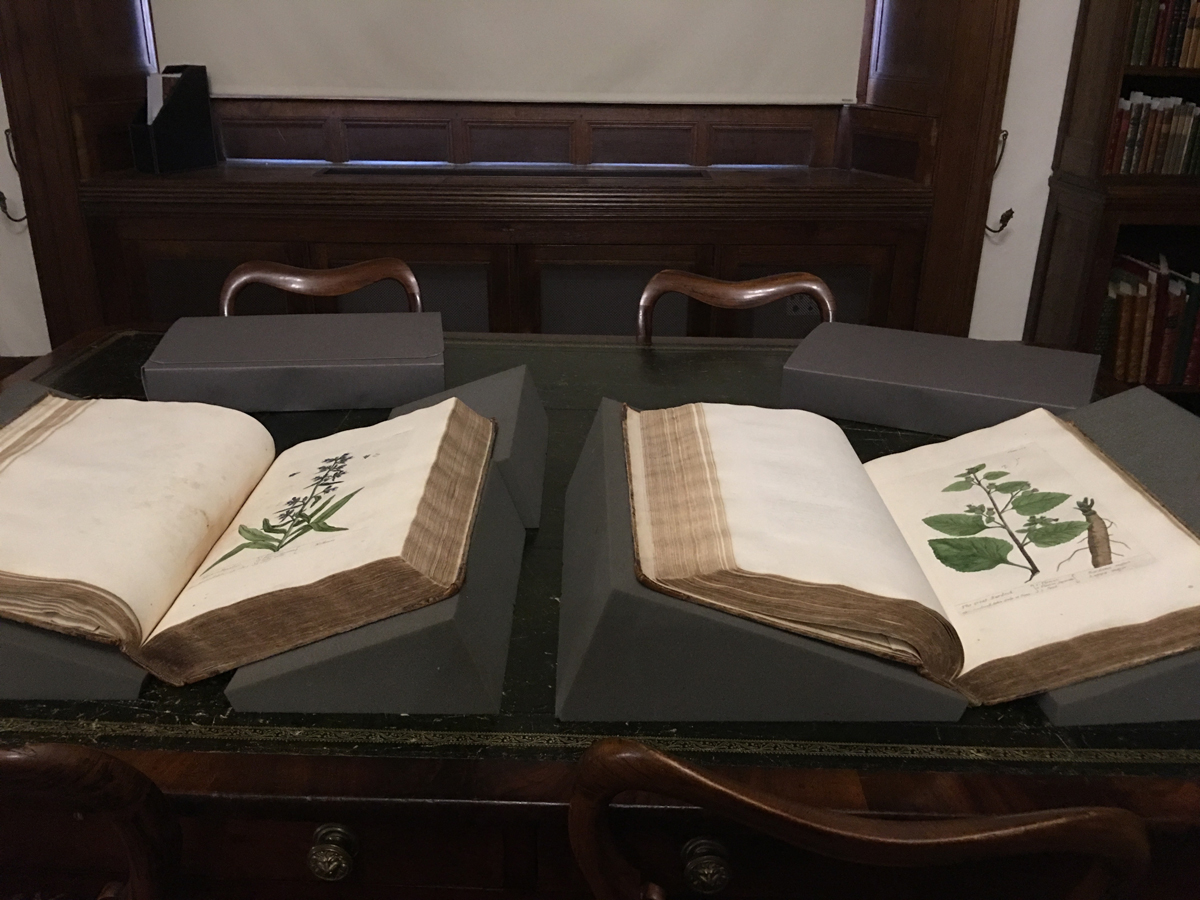 The two-volume display of Elizabeth Blackwell’s A Curious Herbal was one of the highlights of my visit to Chawton House Library.

Chawton House Library is open to the public for use as a reference collection free of charge. The main collection focusses on women’s writing in English during 1600-1830 and can be explored using the online catalogue. There is also a Visiting Fellowship programme run in partnership with the Faculty of Humanities at the University of Southampton, which includes accommodation on site for a month. Details of this and the online catalogue are available on the Chawton House Library website. 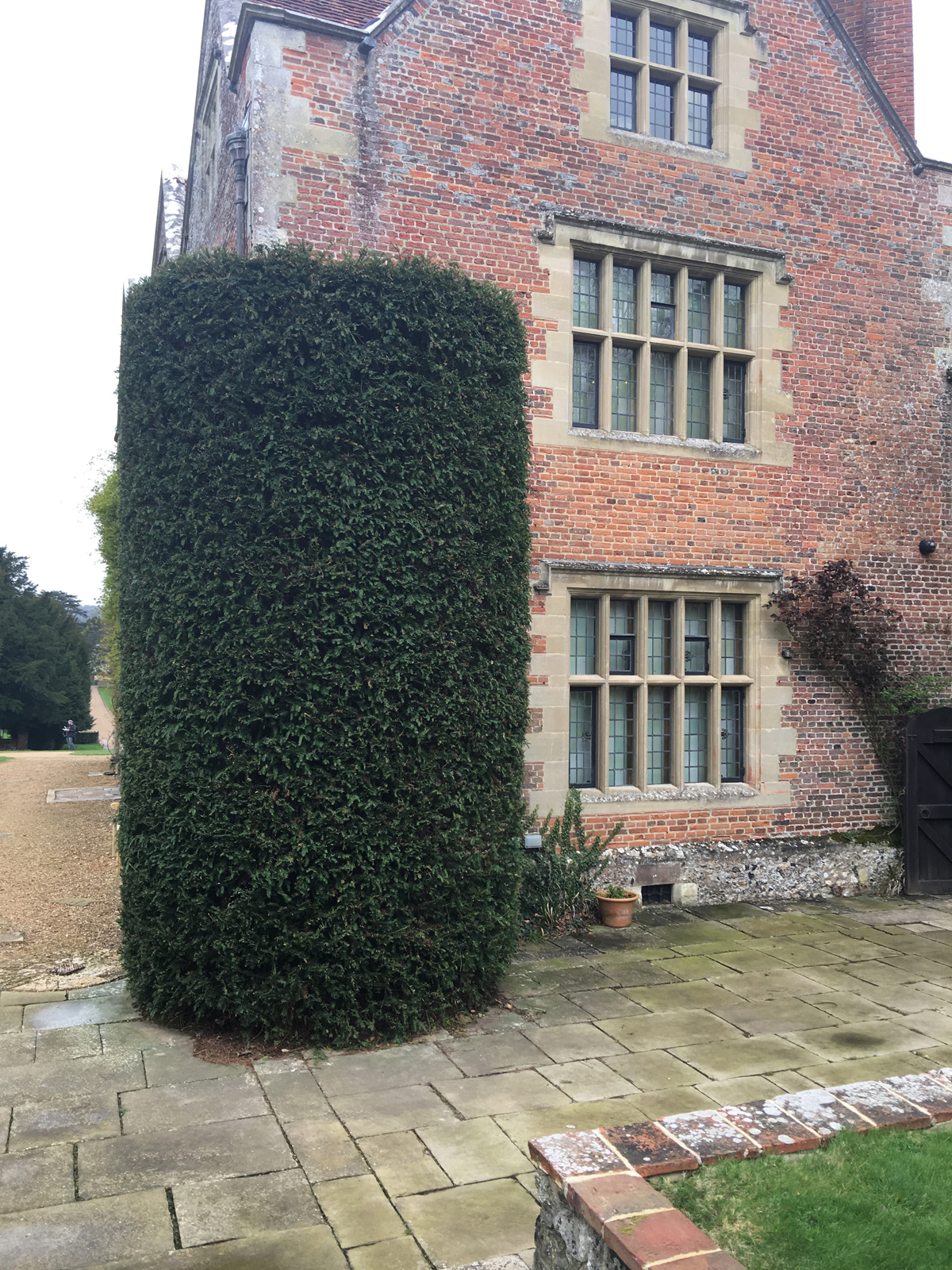 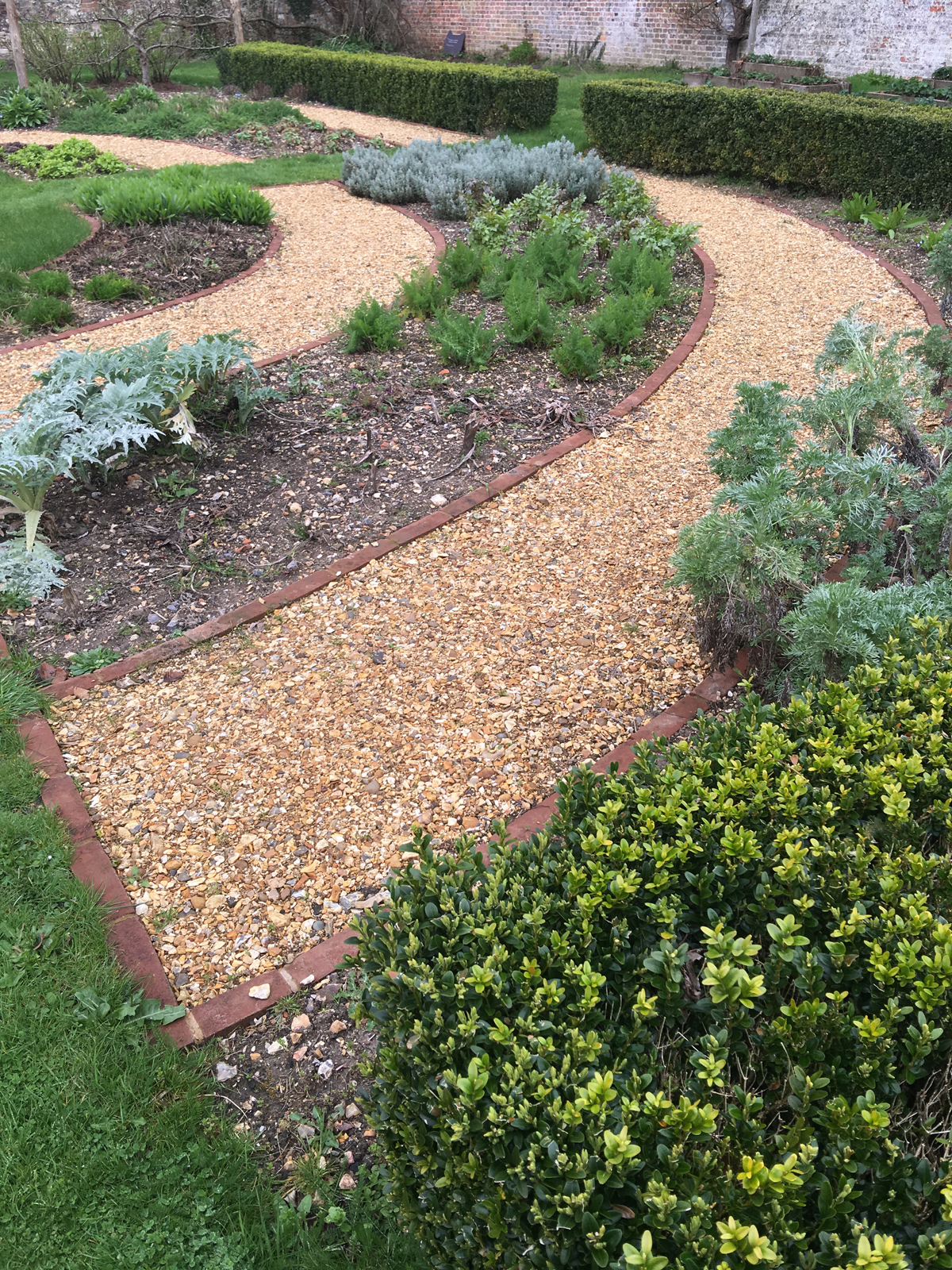 The Herb Garden is enclosed by a box hedge on three sides with a line of old espaliered fruit trees making the fourth side.

If you are so minded following a visit the Chawton House Library you can become a friend and/or adopt a book…How could you fail to be moved to adopt a book, after reading the quotation attributed to Henry Tilney in Northanger Abbey (1818): “The person, be it gentleman or lady, who has not pleasure in a good novel, must be intolerably stupid.”

That is telling it like it is. Even from a timeframe 200 years away, if you love books and novels, in particular, Jane Austen and women writers such as she, still speak loudly to readers of today.

With thanks to Andrew Bentley for these two summer pictures and for the image of the herb garden gates (featured image). 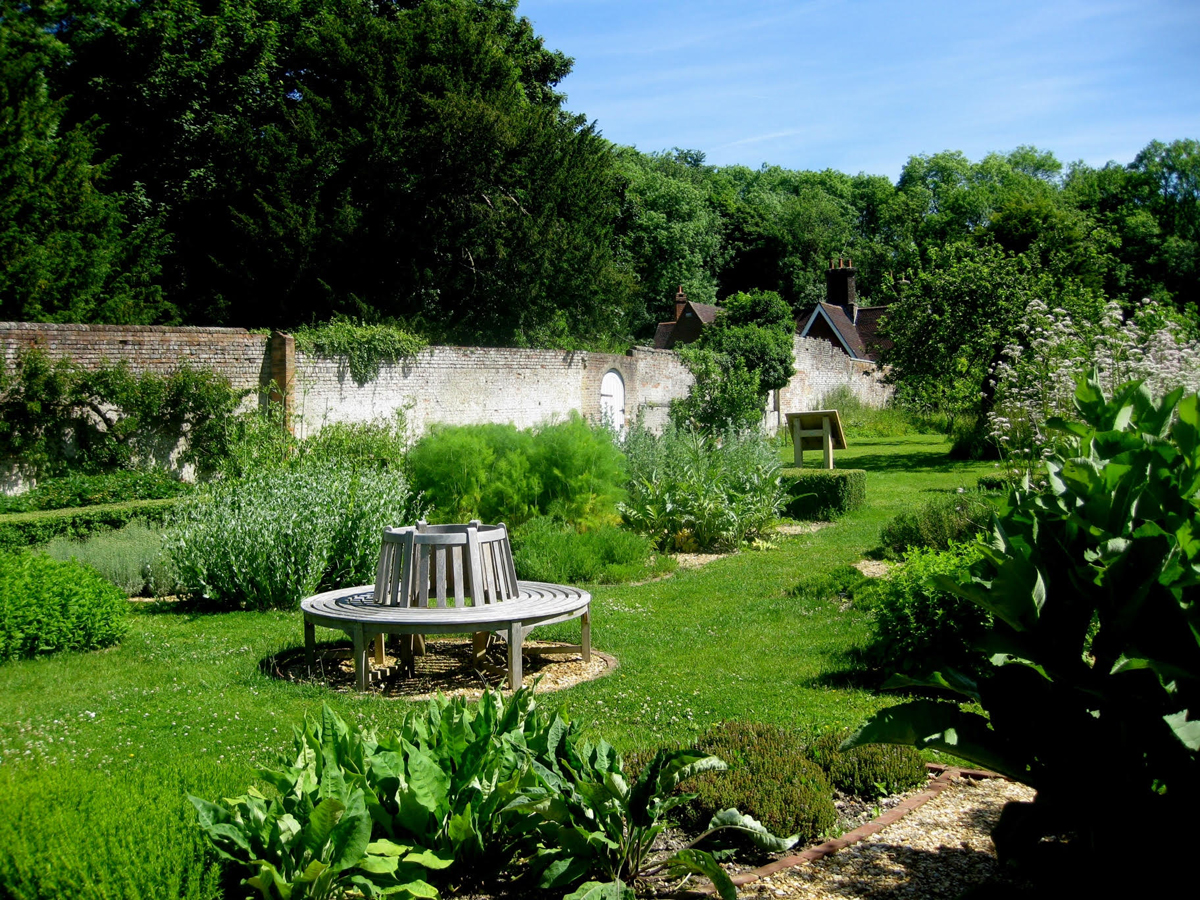 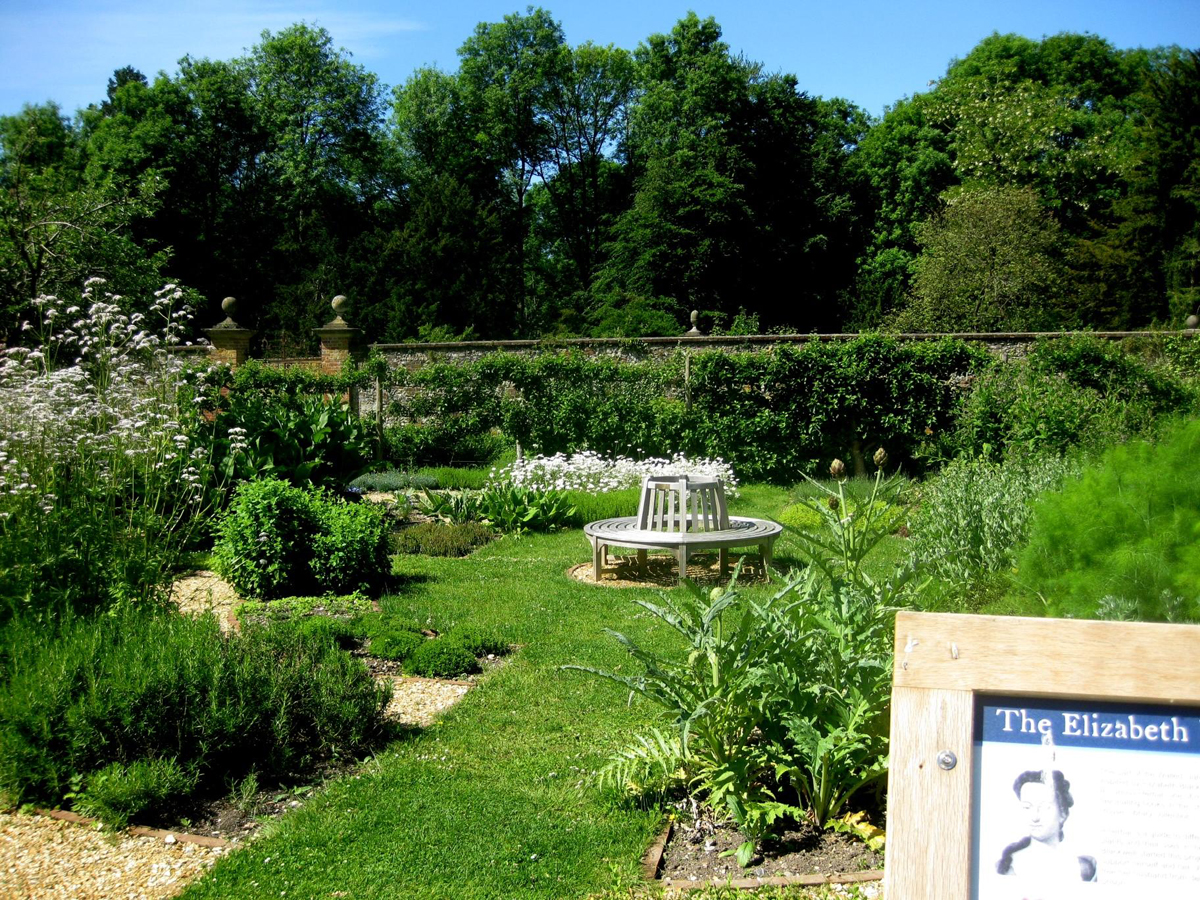 And while you are here, why not join Andrew Bentley (@botanybentley) on a short video tour of the Herb Garden?

Next Friday I celebrate our herb garden being officially open for one year!

I can remember sketching the design one dark November evening 😊 pic.twitter.com/mKqgQsrmUJ