As July comes to its end, summer seems to be moving inevitably towards the early autumn cornucopia.

It is unstoppable now… the blackberry is in its groove, just ripening all day and every day and I am in thrall to its delights. I snack breakfast out there in a hand-to-mouth way as a young friend told me once: “I just straight-eat them!”

Thankfully this blackberry is thornless: it is called Ouachita and is available from D. T. Brown (www.dtbrownseeds.co.uk). It is described as a mid-season Floricane variety, bred in Arkansas, USA. The fruits are large and abundant. I grow them against an ornamental wire and post system, but they can be grown in pots, if you are short of space. My experience, though, is that it is really vigorous and the numerous strong wands of next year’s canes are waving high above the current fruiting stems. 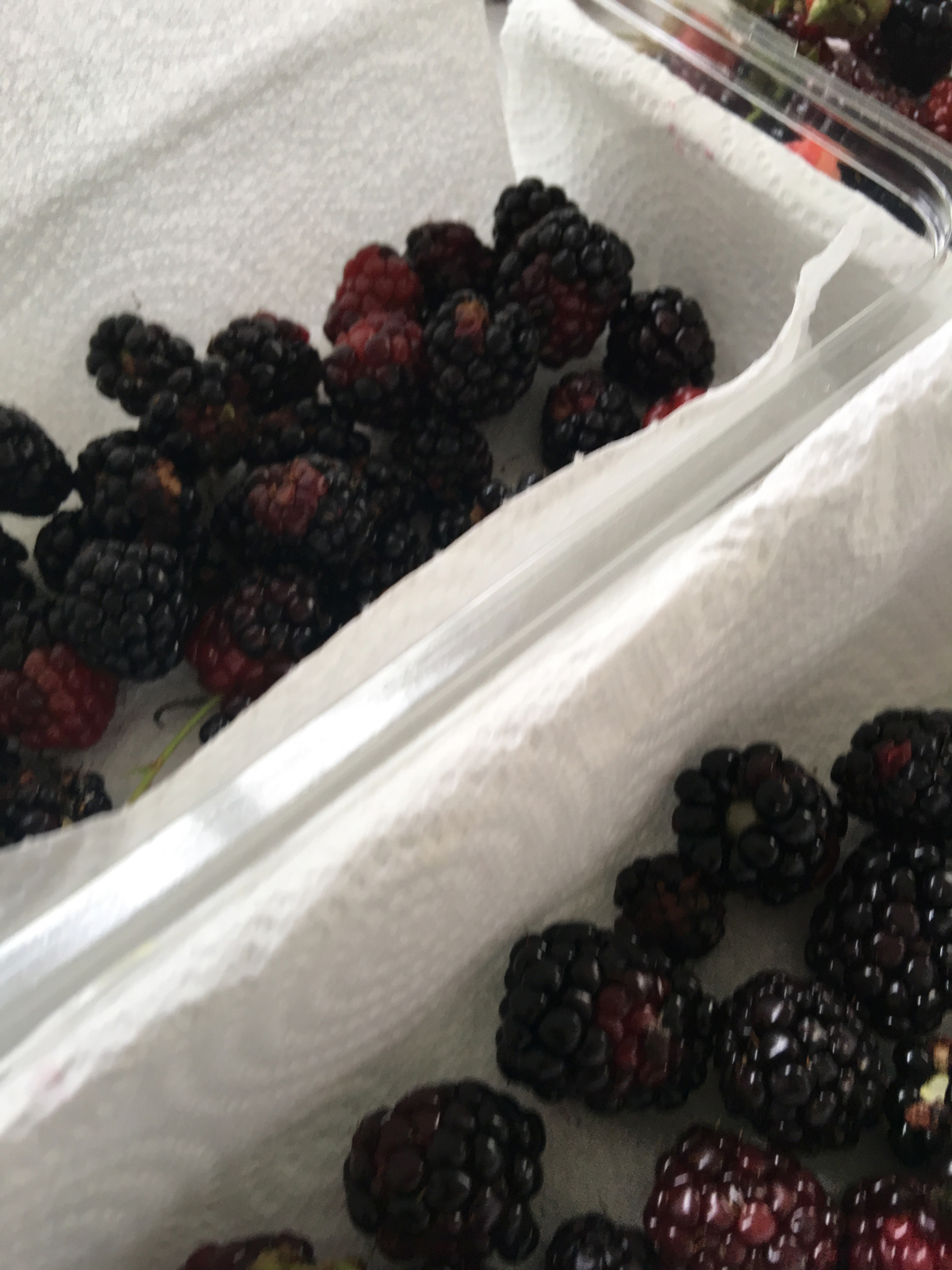 Once the fruit is harvested the old fruiting stems will be cut down and the new ones tied in place to get ready for next year’s bounty. I am always so delighted with this plant… and I am sure I have written about it many times… but it is worth shouting about.

The ornamental garden is full of wonderful rich pools of colour. This year most of the agapanthus are in pots, border or this semi-permanent large container. It came from Suttons but I couldn’t find it on their website recently. It is described as Modular Raised Veggie Bed. It is reasonably easy to assemble and can be put onto hard or soil surfaces. Here Agapanthus ‘Midnight’ and Achillea ptarmica ‘The Pearl’ make a good show during the day and take on a different light in the early evening. 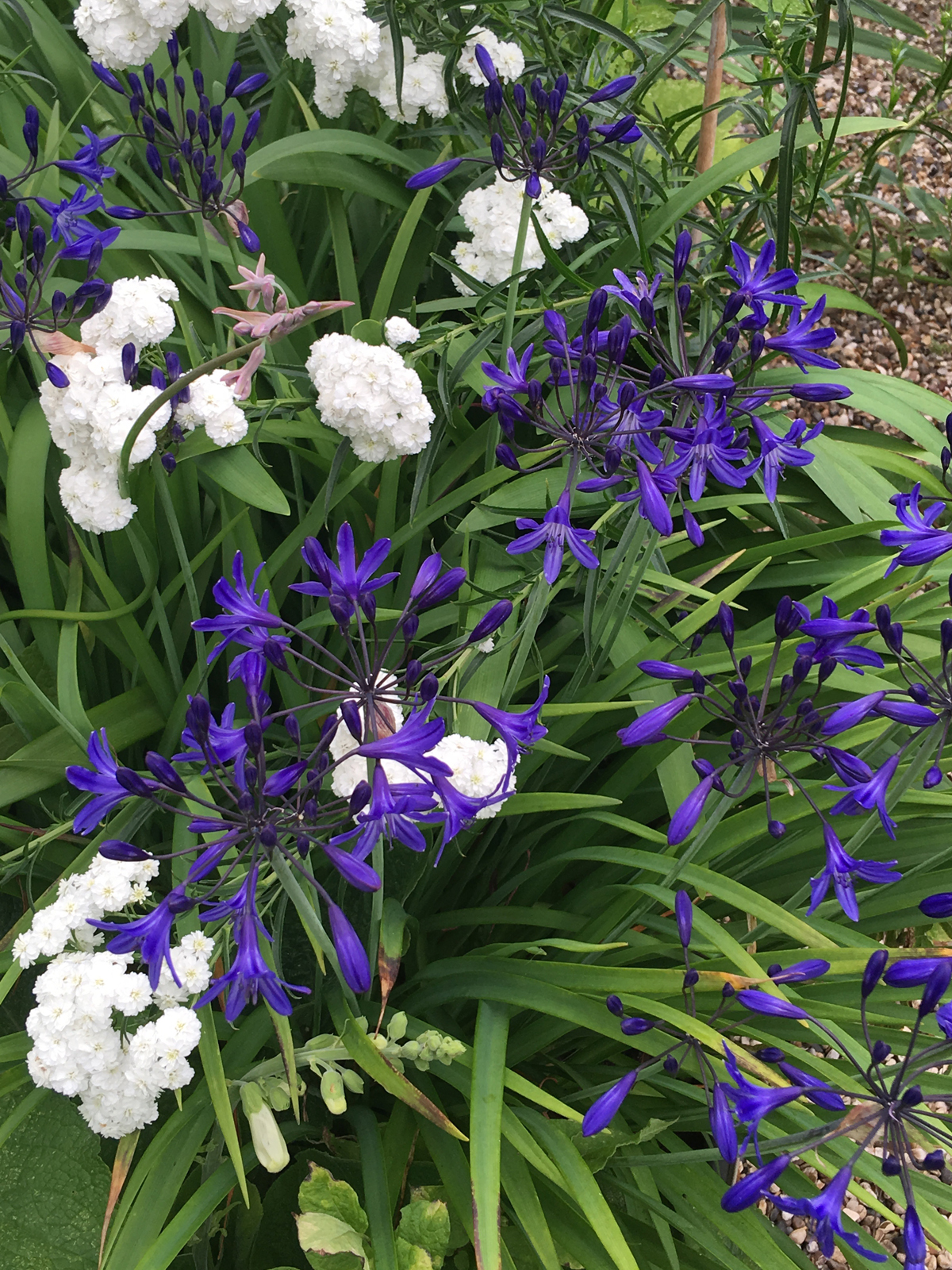 The garden moves through waves of colour as each season progresses and at the moment orange, purple and white seem to be offering the most contrasts.

Dahlia ‘Andries Orange AS’, bred in Holland and released in 1936, honours a Jazz Age liqueur from the small Belgian town of As. It flowers and flowers for weeks on end and provides one of the hot shots of orange in the garden. I feel sure I have raved about this dahlia before, but it is looking even better than last year! 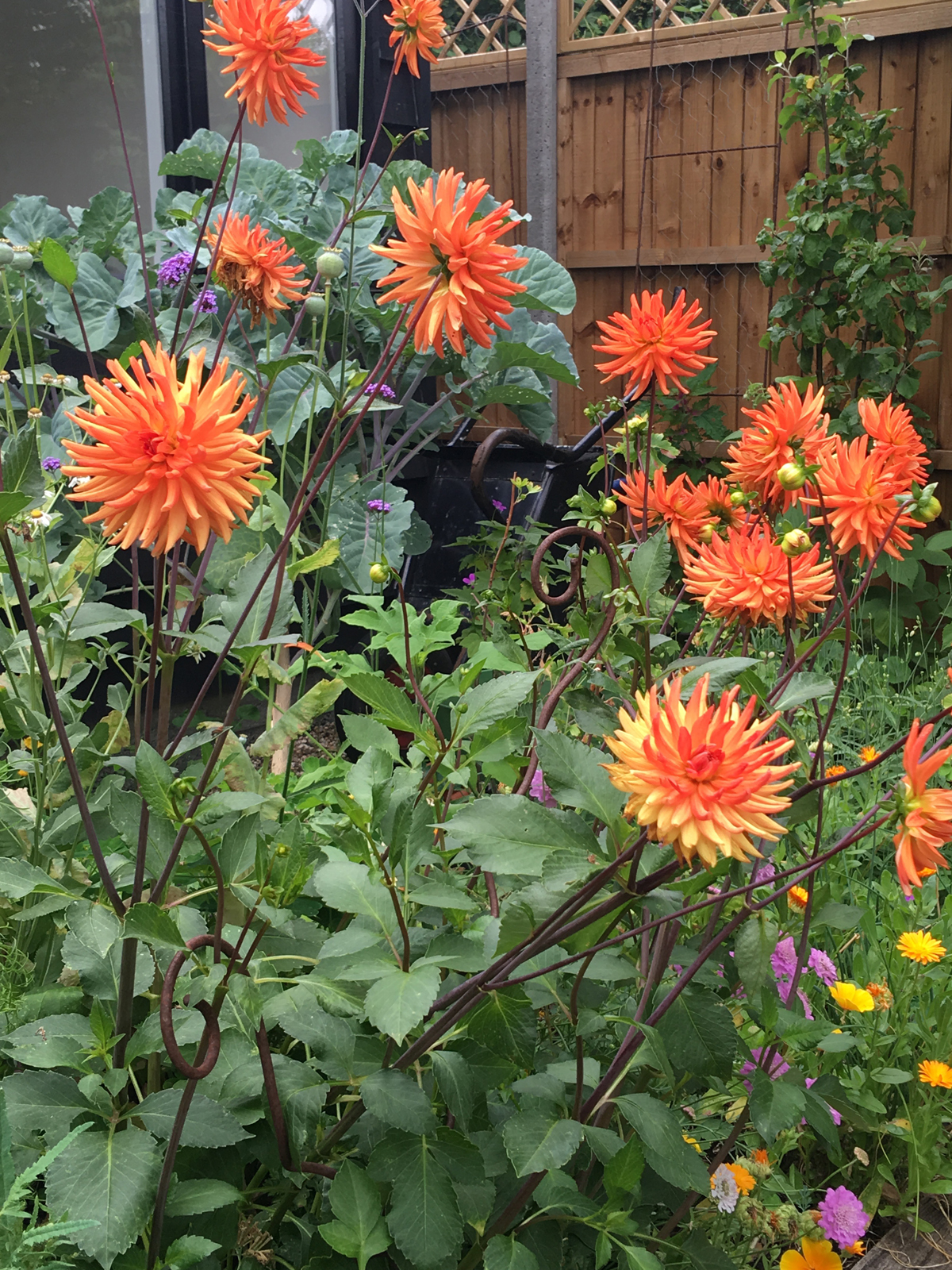 Another comes from the amazing crocosmia ‘Okavango, with its long flower spray. I bought it from Whimble Gardens and Nursery in Herefordshire, when I attended a wonderful weekend at Gardens in the Wild in 2015. 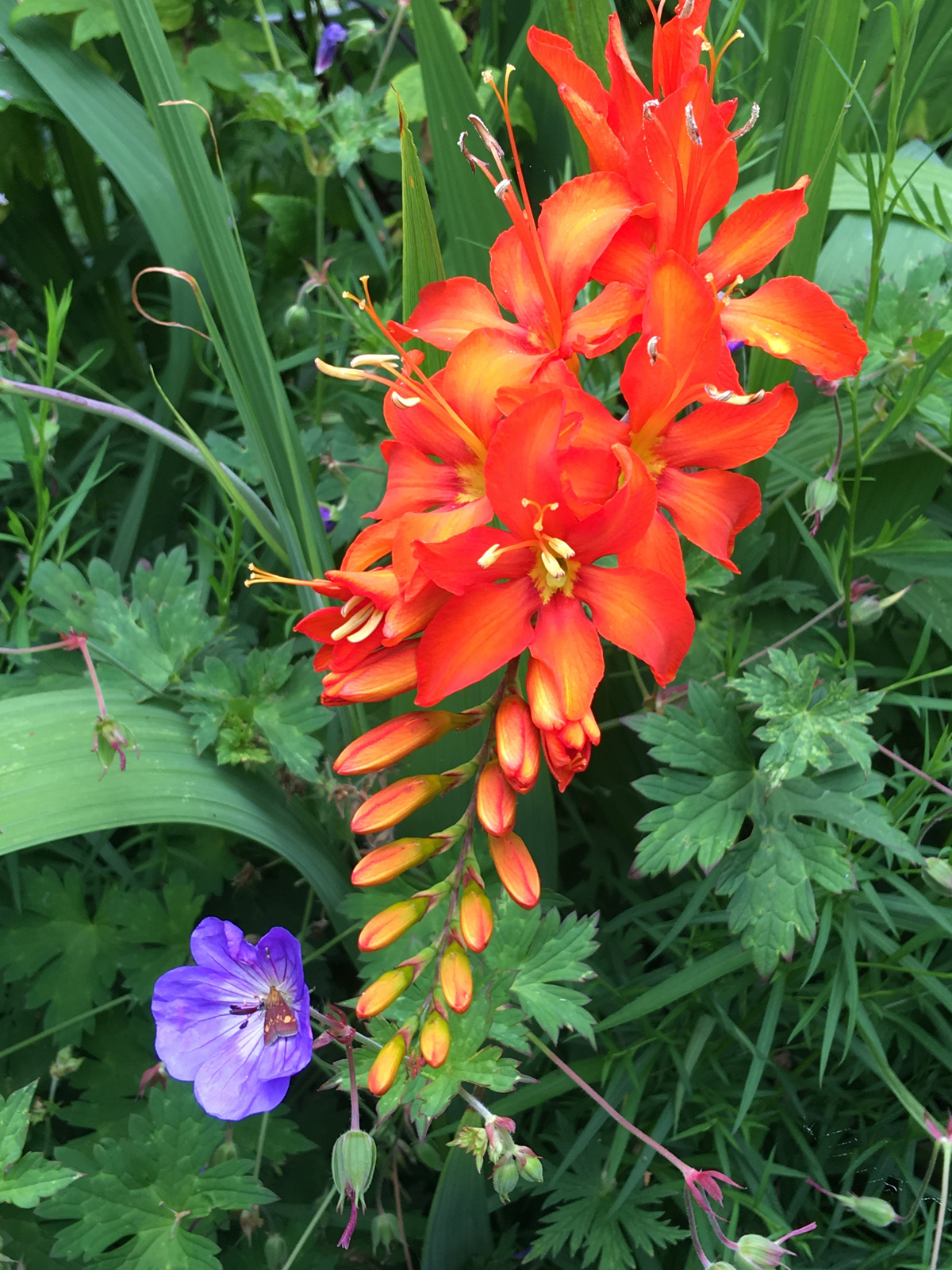 On its own it is classy, but combined with its neighbour Hydrangea ‘Annabelle’ it becomes a big hitter in the border. 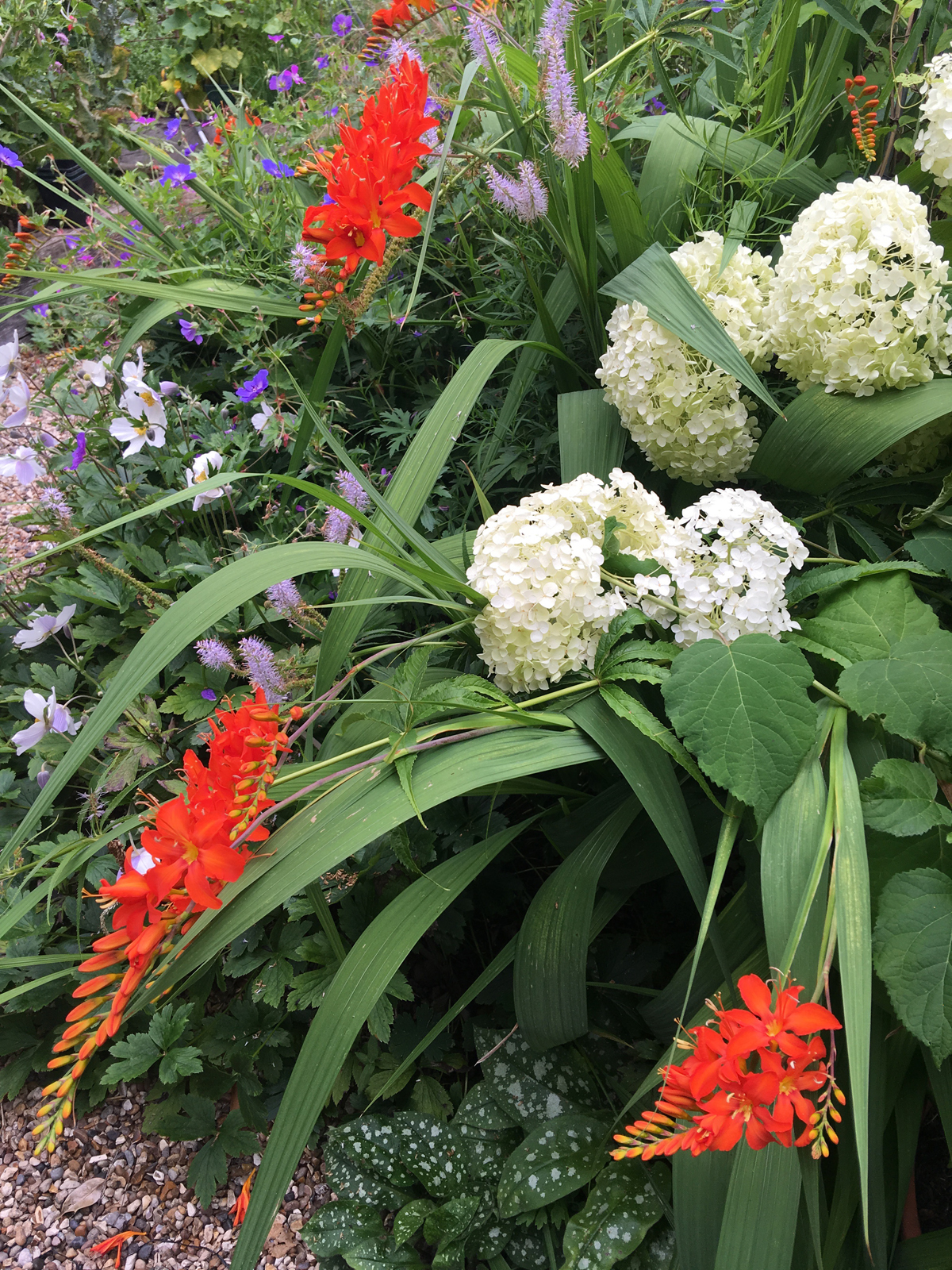 Crocosmia ‘Okagango’ and Hydrangea ‘Annabelle’ make a magnificent double act at this time of year.

Roses continue to make a colourful contribution, with a rose named for me providing some very rich tones. Rosa ‘Homage à Barbara’ is velvety red and its foliage is almost as good as the flowers, with a rich bronze glow. I couldn’t resist picking some of its blooms for the house, which was fortunate, since the rain has given it a bit of a beating. 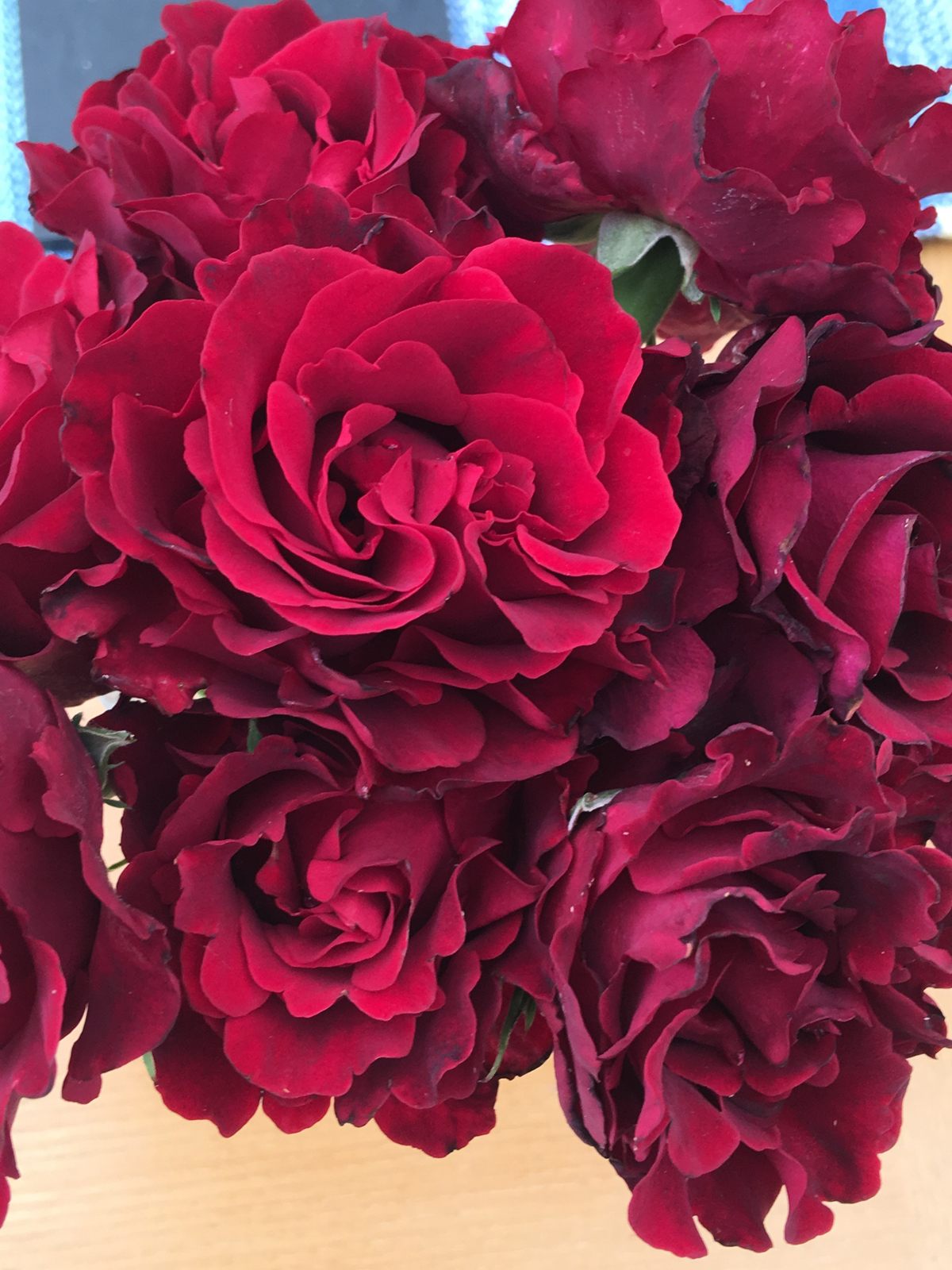 Another of my favourite combinations in the garden this year is that of Verbena ‘Bampton’ which was a gift from Beth Chatto, who very kindly wrote the foreword to my new book, Secret Gardens of East Anglia with wonderful photography by Marcus Harpur (the book is due to be launched in early September: it can be pre-ordered from Amazon. I am busy planning publicity talks etc). But back to the combination of the verbena… it is thriving in a container and its thin, strand-like stems with dainty purple flowers are a delightful foil to the non-stop flowers of a rose whose name causes me a little smile. May I introduce you to Rosa ‘Hilda Ogden’. 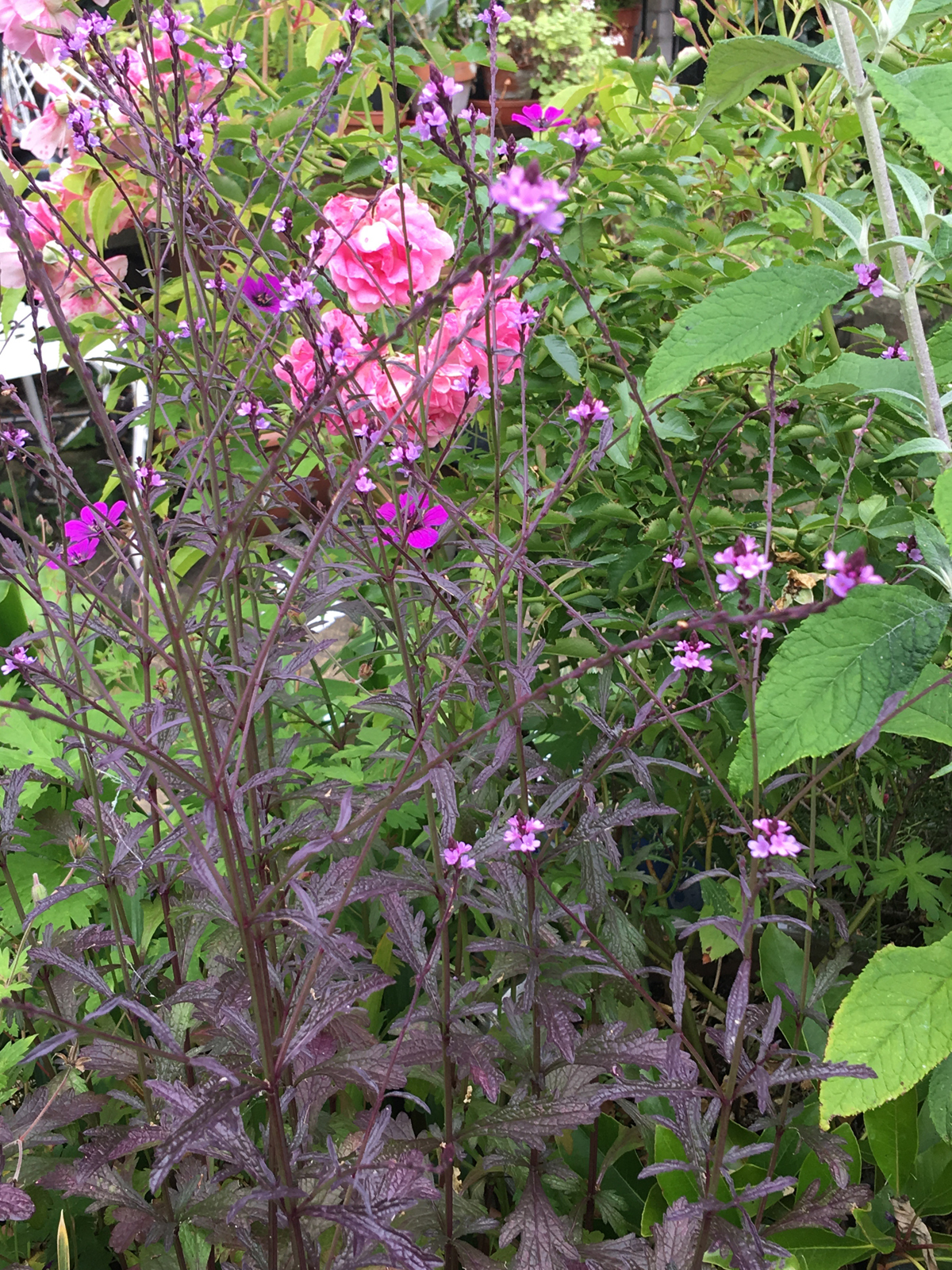 The garden is growing so well and the already narrow paths have in some places disappeared completely, as plants spill across them from both sides. 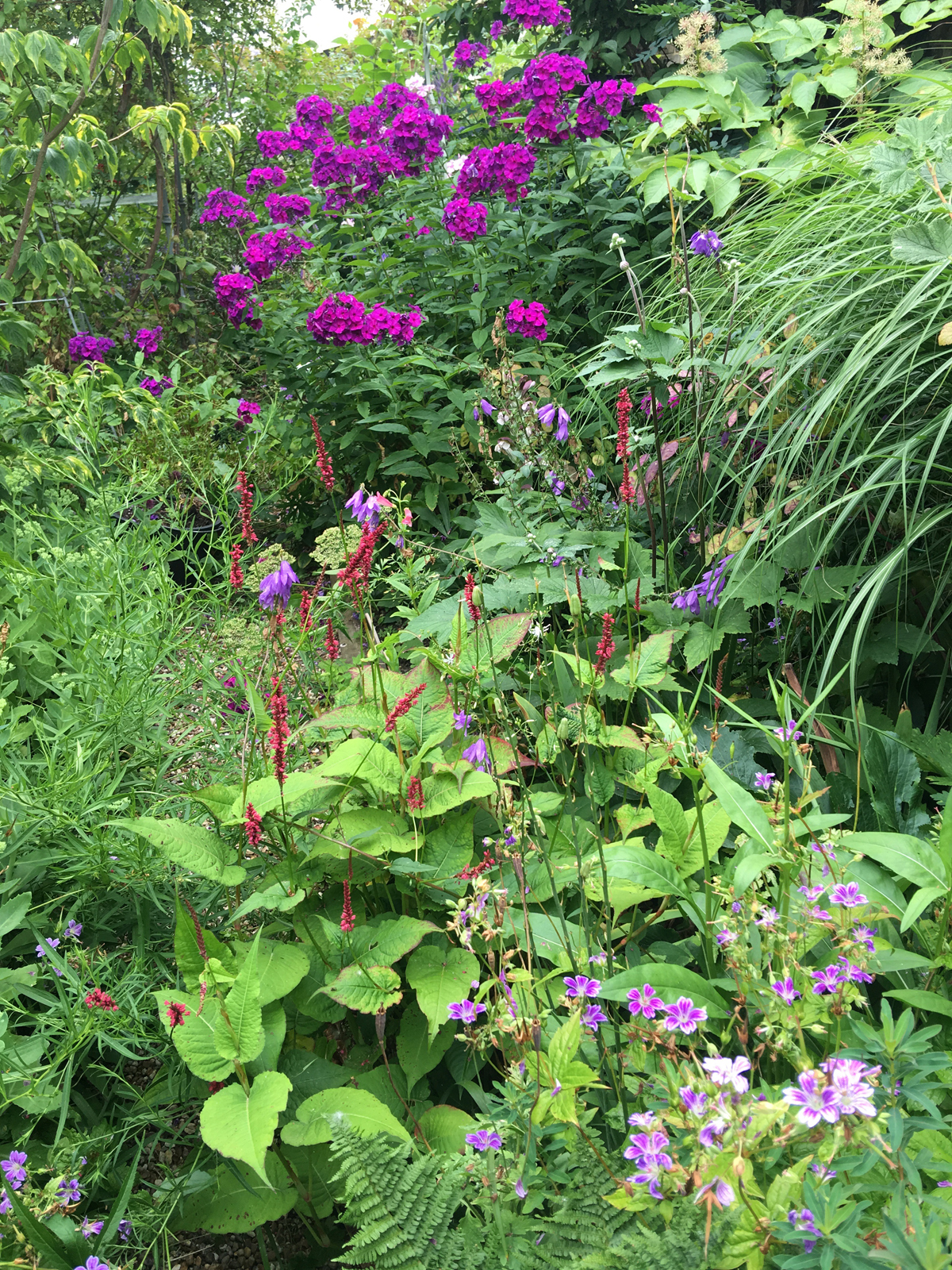 I think there is a path somewhere here!

I certainly don’t sit down for a moment these days… there is always something that needs doing or harvesting. But some plants, such as Geranium ‘Roxanne’ seem to be able to bag the best seat in the garden. From this vantage point, through the rose tunnel, now sporting the foliage of the soon-to-be- flowering Lezpedeza thunbergii, you can glimpse the garden room that awaits dreaming, reading, thinking, drinking and generally sitting around… fat chance, eh! 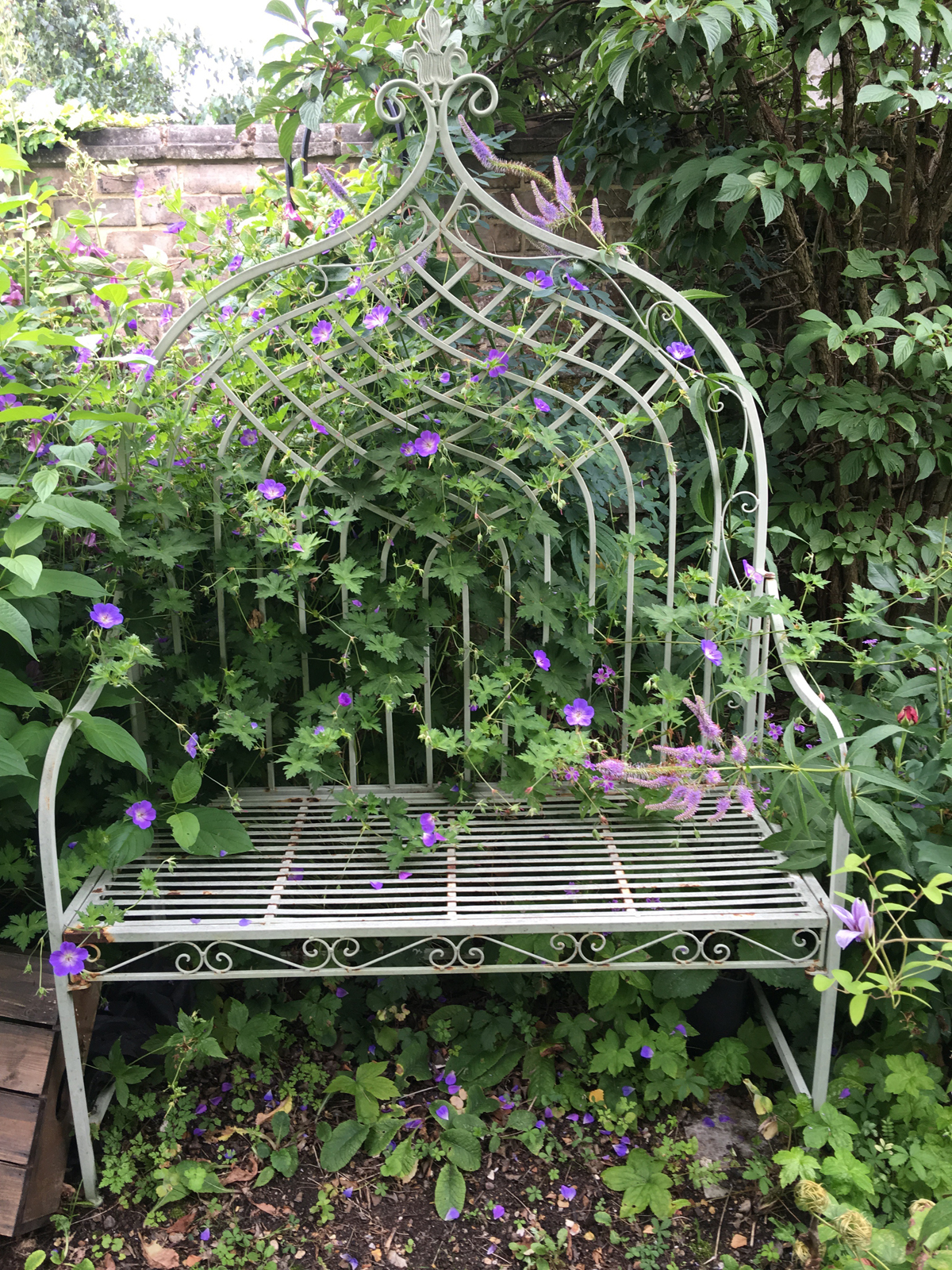 Geranium ‘Roxanne’ is sitting down on the job! 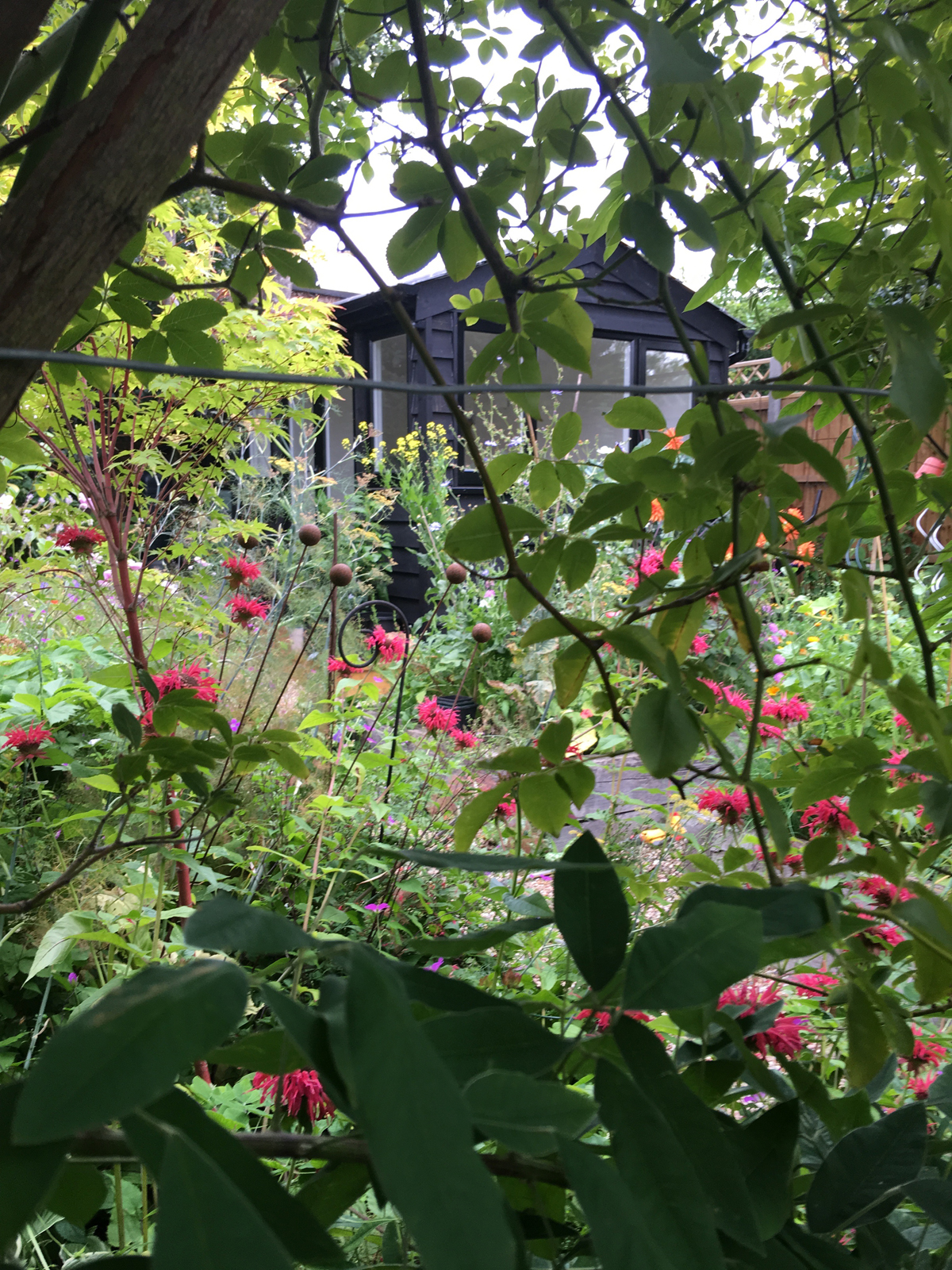 Glimpse through the rose tunnel.