It is a wonderful time at the allotment and in the garden with fruit and veg starting to grow and ripen, ready for harvesting.

Things are looking up … down on the allotment. First of all in May my friend Gisela and I installed the net tunnel that I had bought in 2016 at the RHS Malvern Flower Show from a company called Garden Skill. 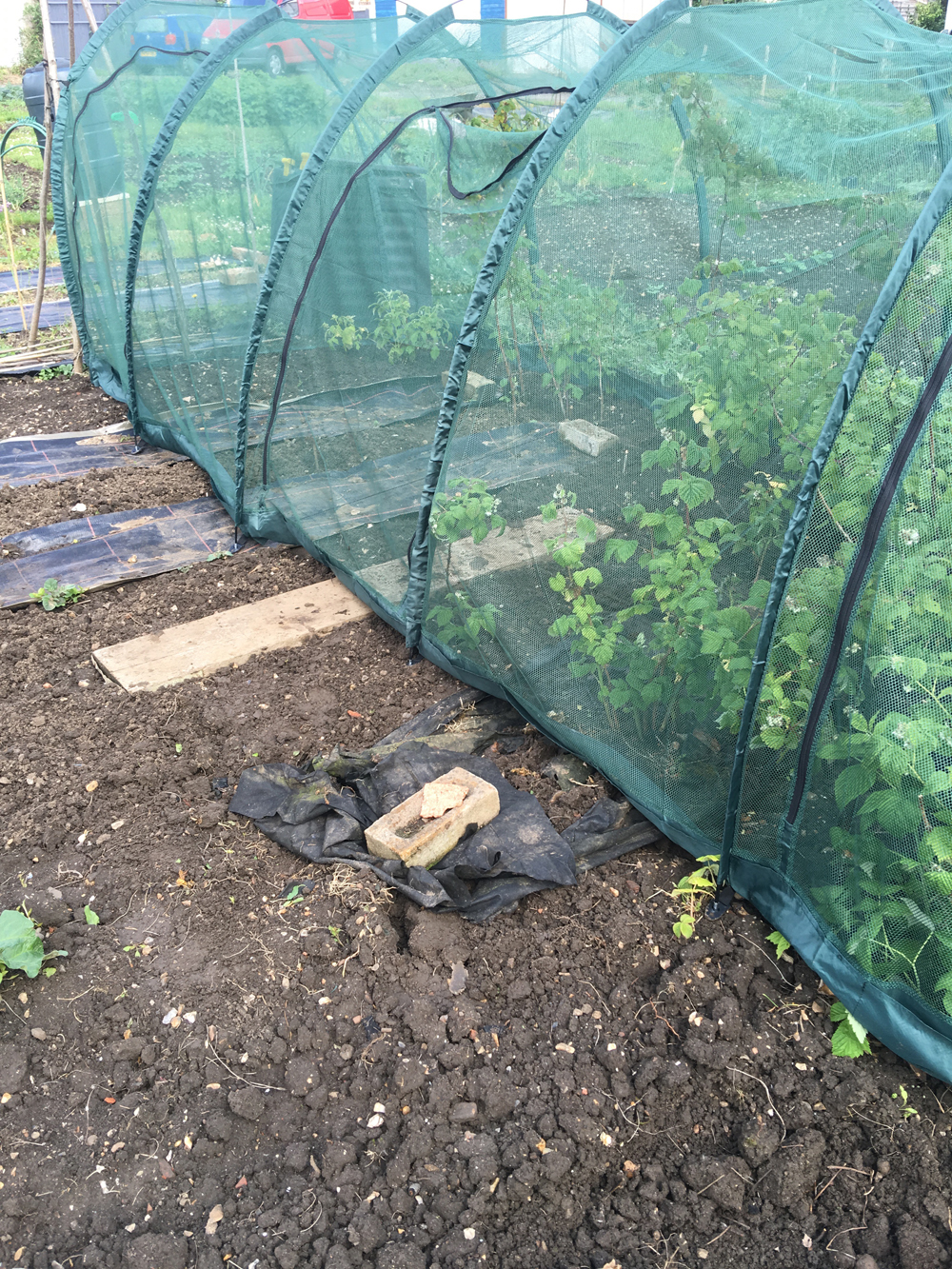 The fruit pavilion is installed. 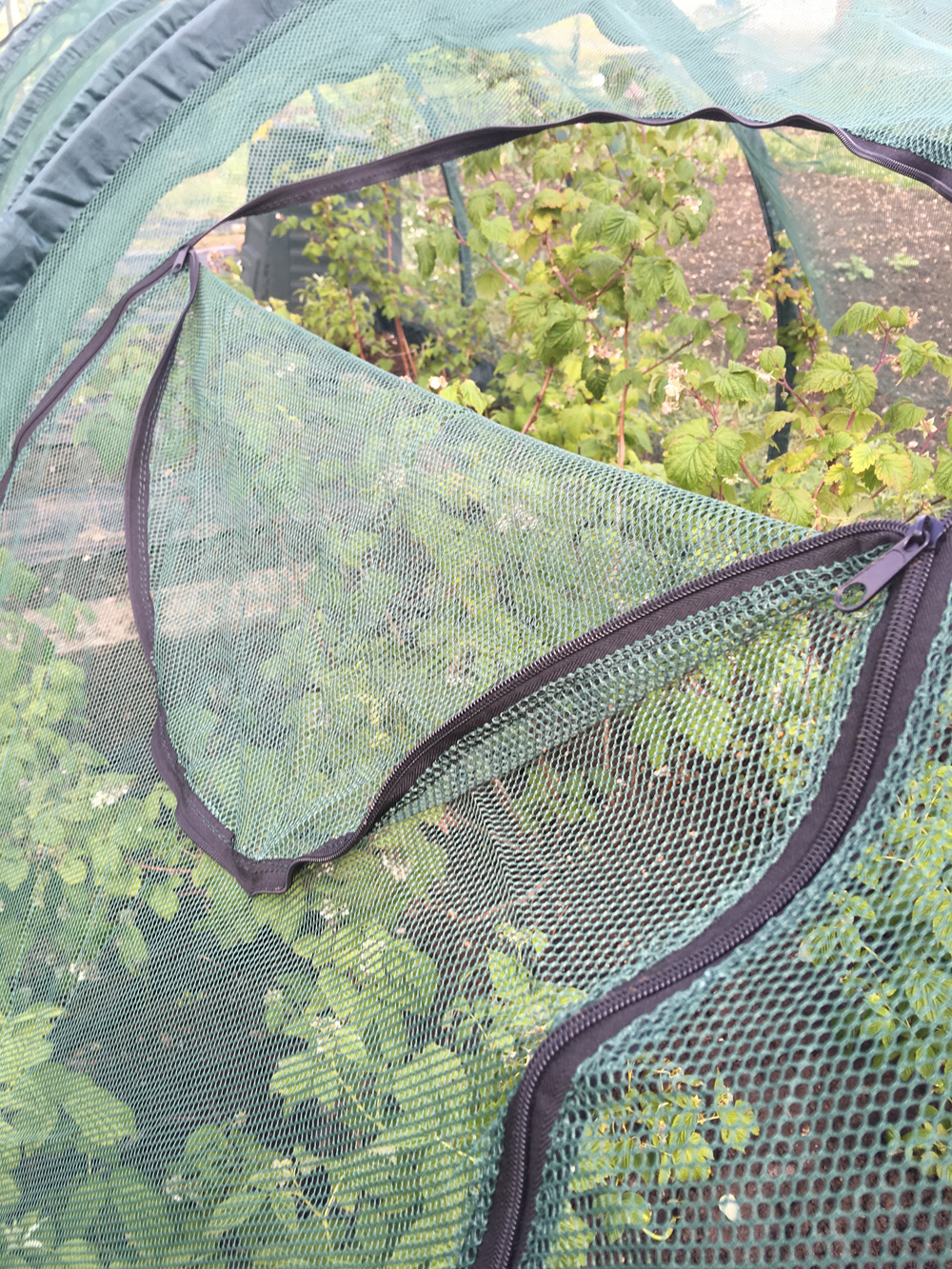 Crafty access zips allow me and the pollinators in. I need more space than this though! 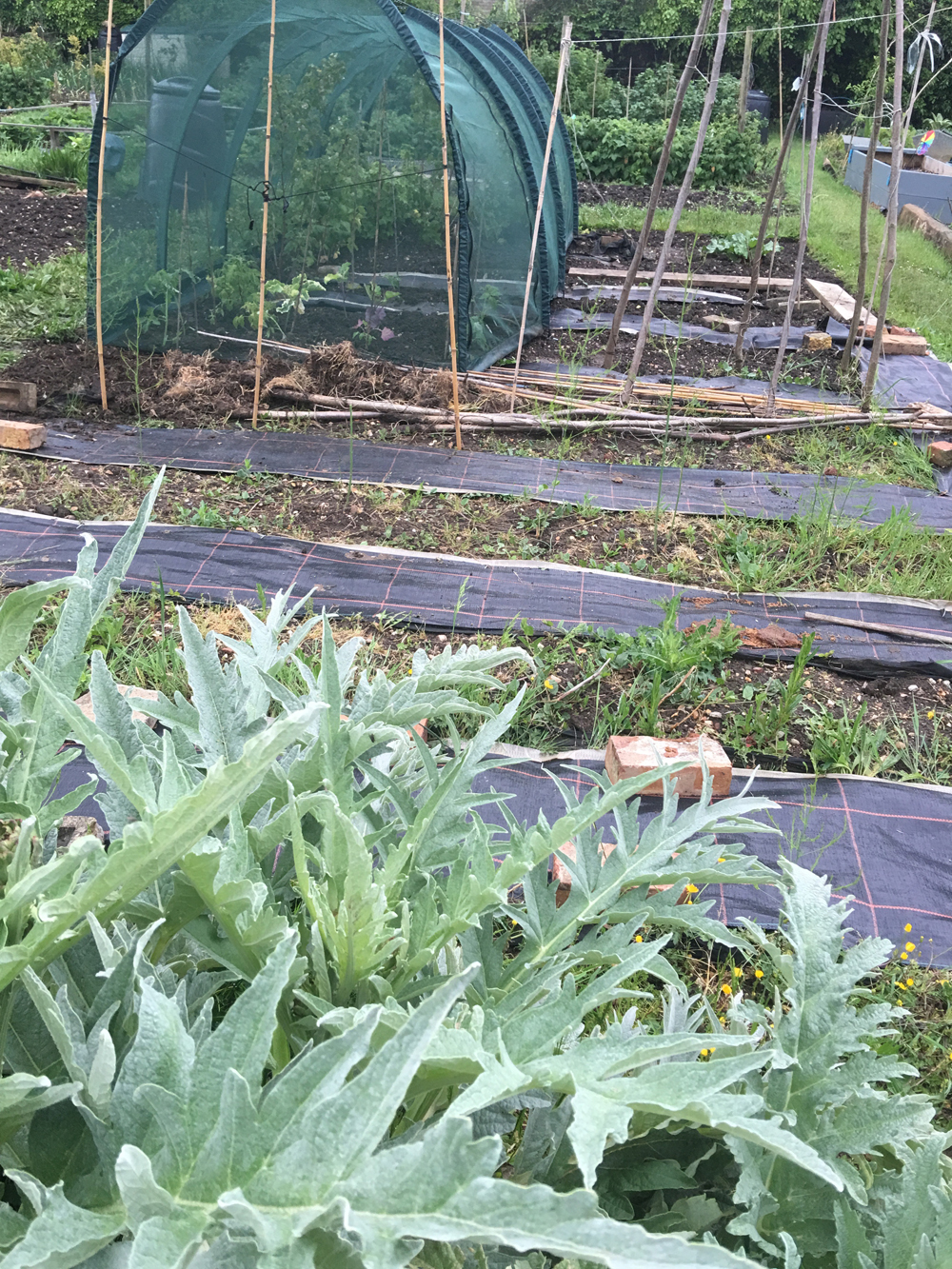 The plot viewed from the artichokes down to the tunnel, before weeding and edging transformed it into a place of ‘beauty’.

Swiftly christened ‘the fruit and veg pavilion’, the netting tunnel is held up by a collection of carbon fibre rods, slotted together to make whippy hoops. It comes complete with guy ropes and ground pegs and provides protection from pigeons, rabbits and any other allotment pests, as well as offering UV protection, a bit of shading and wind protection.

It has transformed the fruit crop: previously the birds had it all, but this year raspberries (mainly from Lubera and redcurrants (several bushes came to me from a gardening friend and colleague) from several, almost daily picking have been ‘all mine’. Also planted into the tunnel are tomatoes and brassicas, including one or two new plants of Daubenton’s kale. 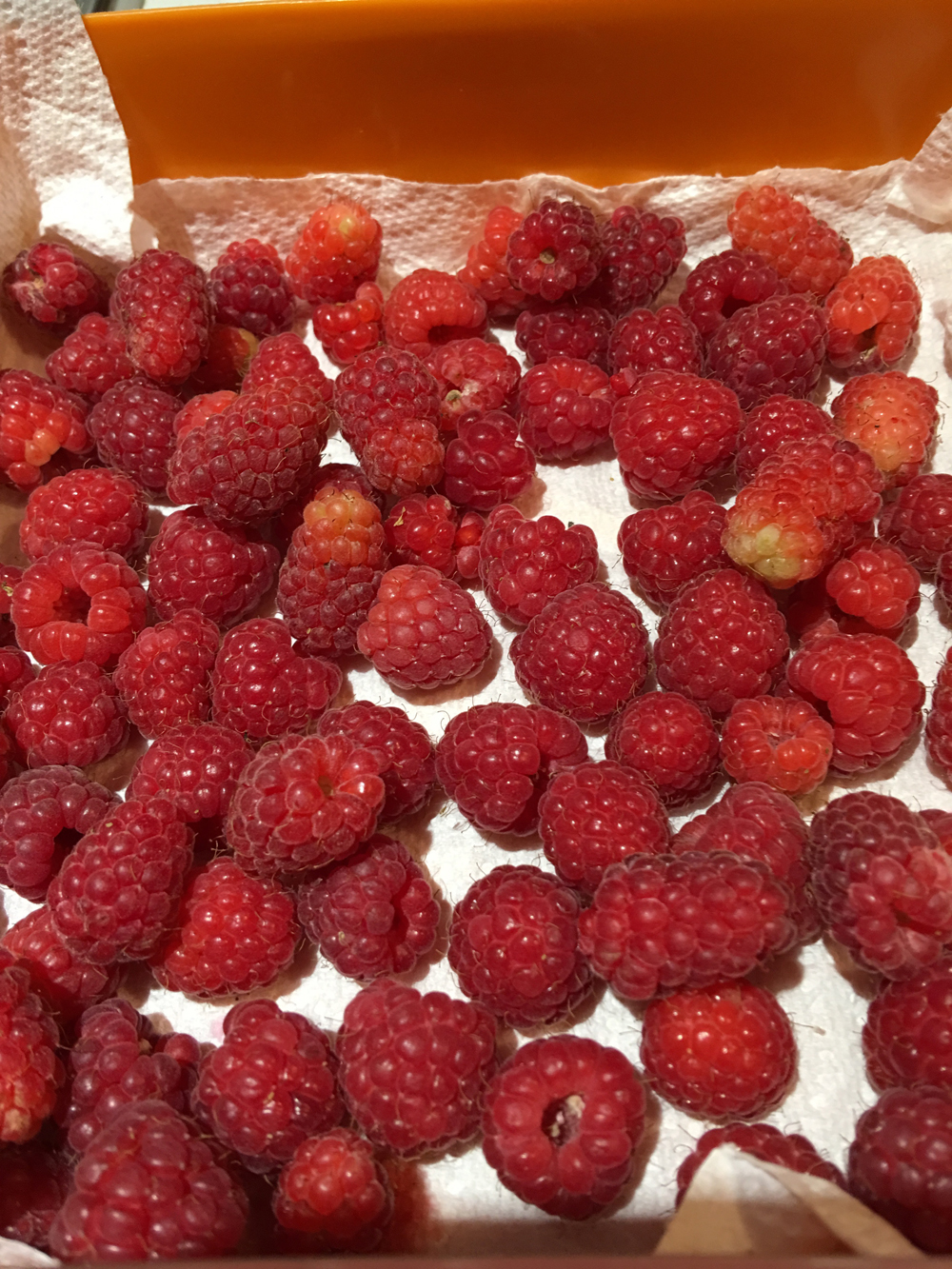 I have had a wonderful harvest from Lubera’s raspberries, including Two-timer Sugana. 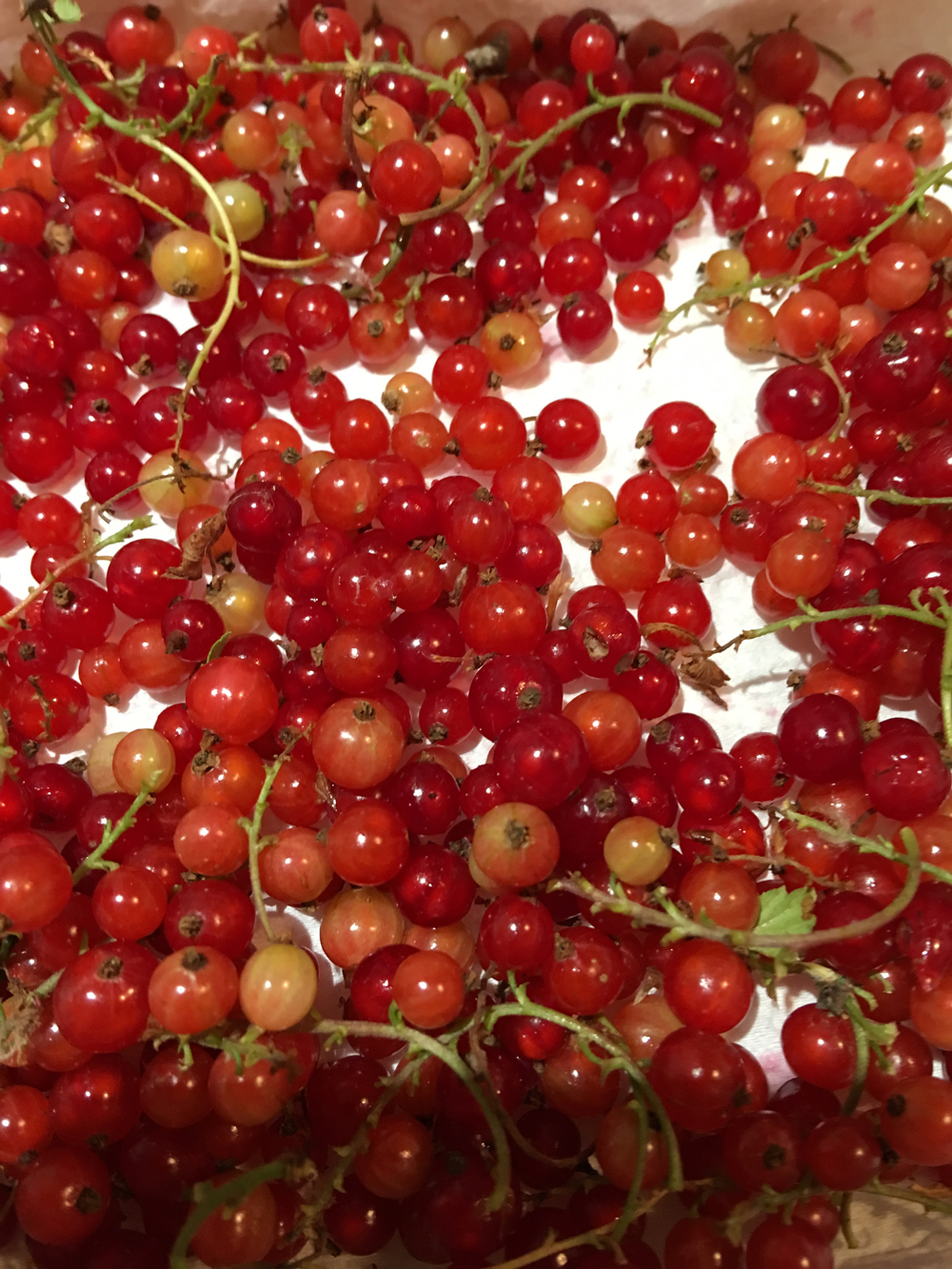 Strings of redcurrants look like shiny jewels and are great in summer puddings.

There are two sections of the tunnel with zipped entrances and the height of the cloches at a maximum of 1.5m means you can stand up, although the wind has buffeted my tunnel, so the height is slightly compromised. The zipped access points can be unzipped to allow for pollinators during flowering. I like the set up because it also means that birds are unlikely to get in and die within the netting, and if they did, my neighbouring allotmenteers could unzip a section to ‘let them out’.

At the base of the tunnel are pouches that I filled with pebble to weight it all down. I was really pleased with the tunnel, especially when I returned home from RHS Flowershow Chatsworth during a stormy and windy period in early June. I had half-thought that I would find the tunnel in shreds or on a nearby plot! But no, it is sturdy, and has made such a difference.

Next another factor that has cheered me up on the allotment, has been some help from a young friend who was willing to weed and edge for me (a shoulder injury, resulting from tripping on a pavement last summer, is just about on the mend, but it has meant that I needed a little help from my friends). So, as far as allotments (or my allotment in particular, I should say) can be neat and tidy, this one is, and is now a joy and not a burden. Sweetcorn plants (‘Glass Gem’ from Baker Creek Heirloom Seeds) are in, various squash and pumpkin, beans and a while back, potatoes. 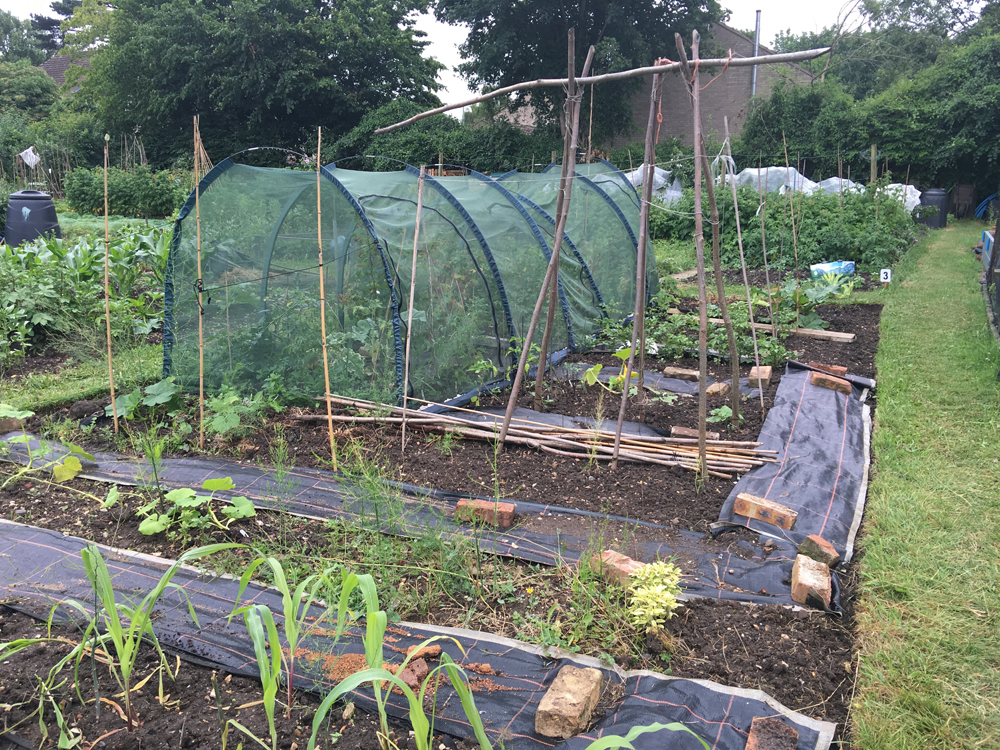 Sweetcorn plants are in, some squash and in the background there are potatoes planted much earlier.

I was pleased with the first artichokes from my splendid plants that are now settling in to do what I hoped they would… be productive and ornamental. 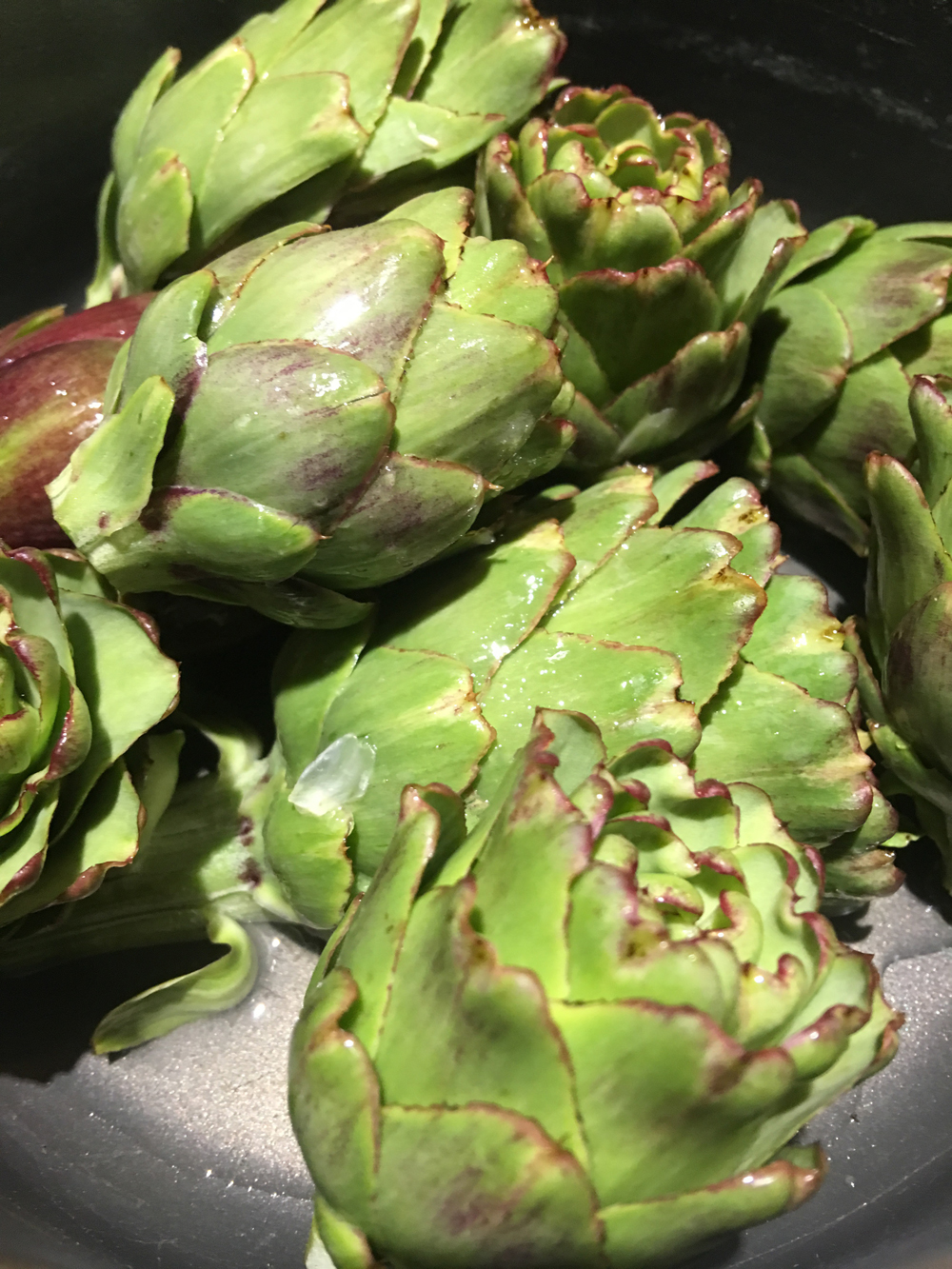 Artichokes ready for the pot. 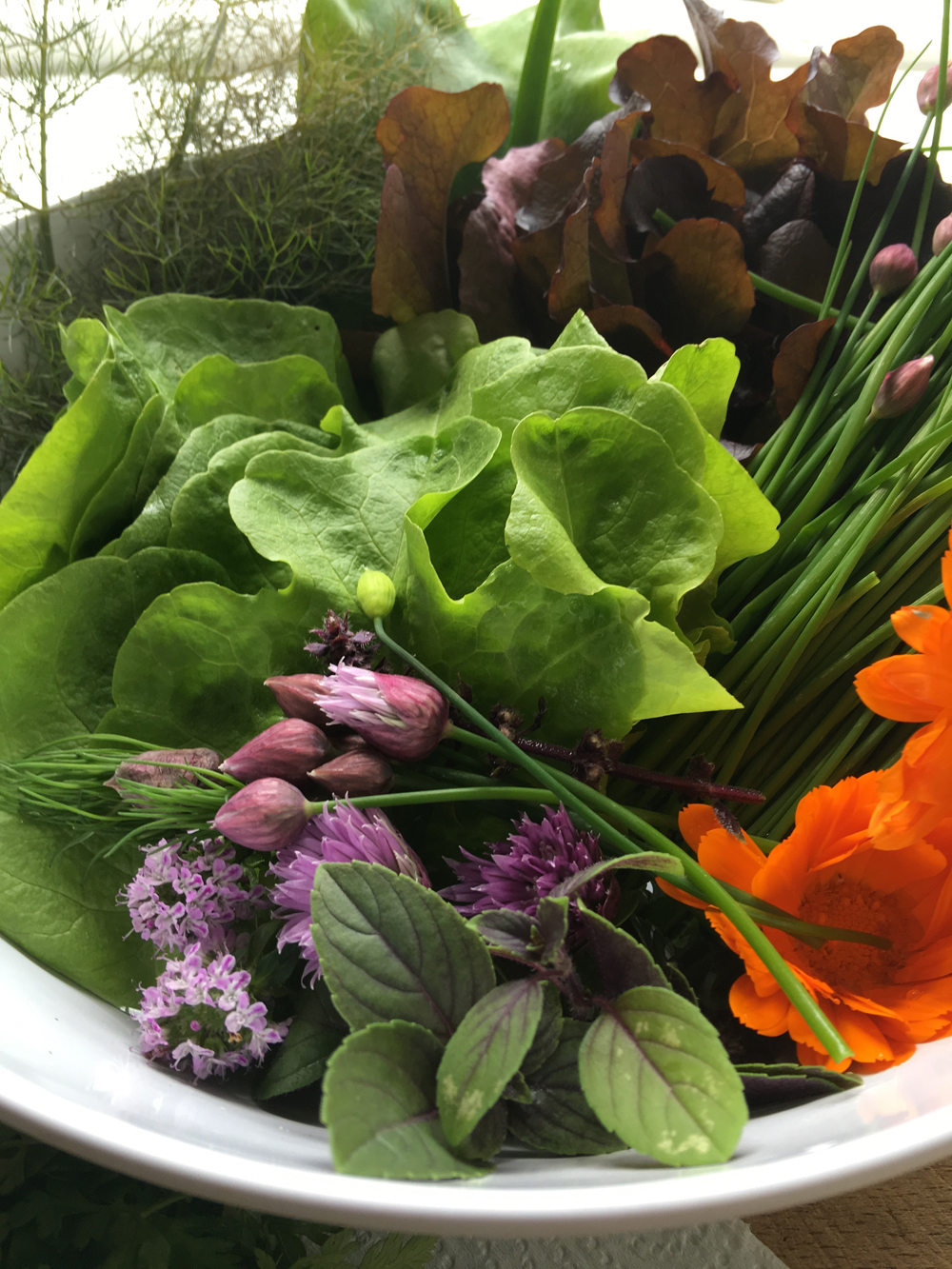 Lettuce and herbs have been on my menu daily for several weeks.

At home I have been harvesting lettuce and herbs daily, as well as tayberries and gooseberries. The thornless blackberry is getting ready to make its huge contribution to my ‘five a day’. The apricot ‘Tomcot’ was not so productive this year, but I have enjoyed what was on offer. Maybe next year will be one of those ‘super’ harvest years. 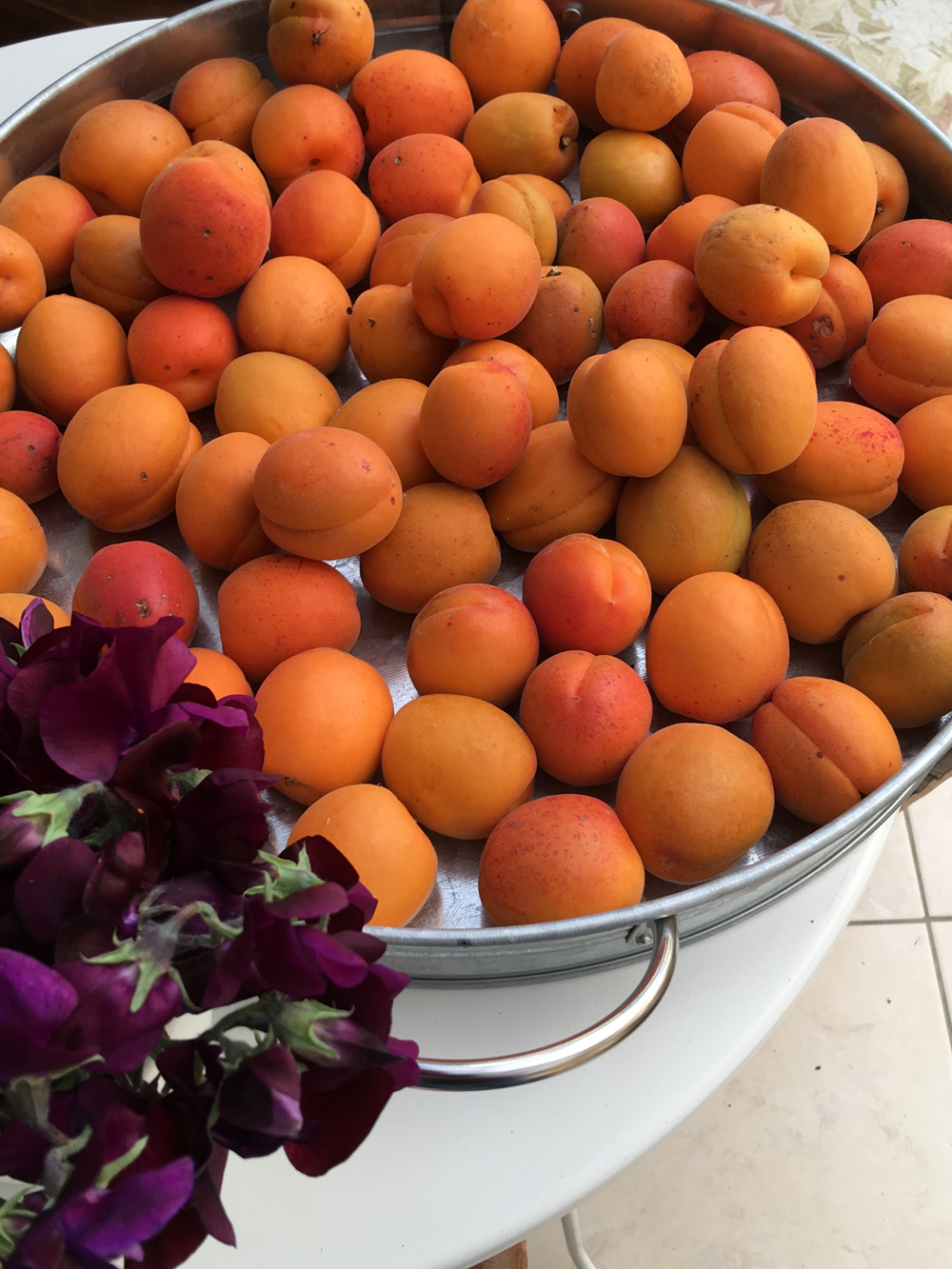 Apricots are my favourite ‘snacks’!

Just blooming is the pink-flowered strawberry on trial from Thompson & Morgan. I tasted it at their trial ground last summer and am looking forward to it in my own garden. It is so sweet, as its fitting name, Just Add Cream™ suggests. 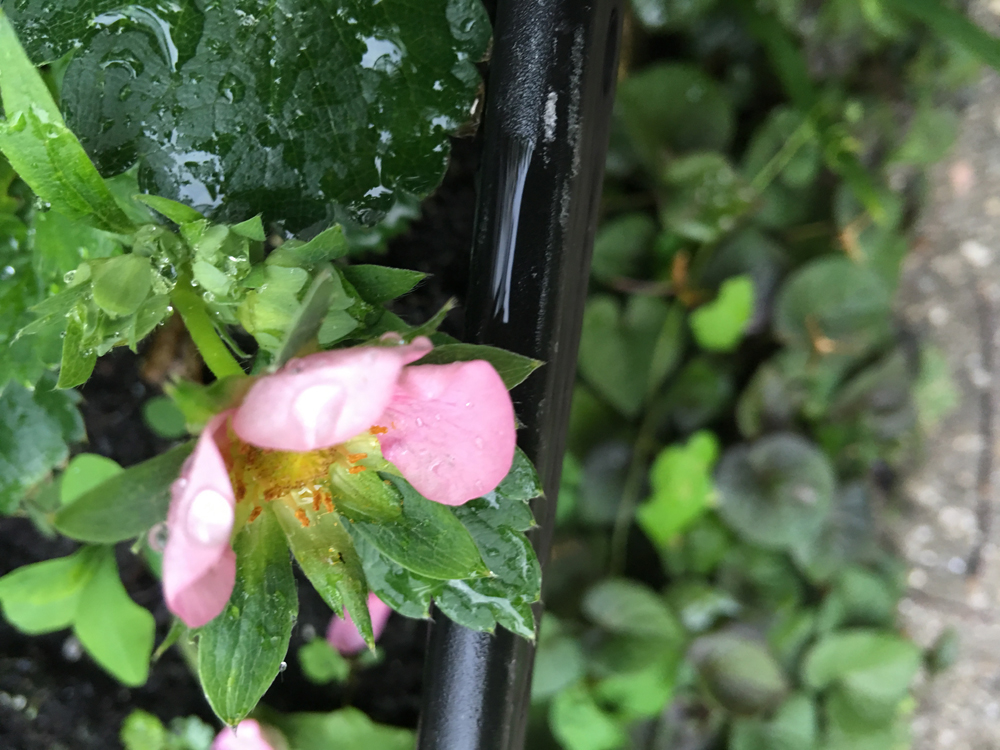 Not everything in the garden goes onto my table or into the freezer. I am delighted to say that the garden is a-buzz with wildlife, particularly bees. The bluest of blue eryngiums has been a favourite place for bees for days. There have been dozens of different bees on the flowers constantly. So we are zinging the blues in the garden! 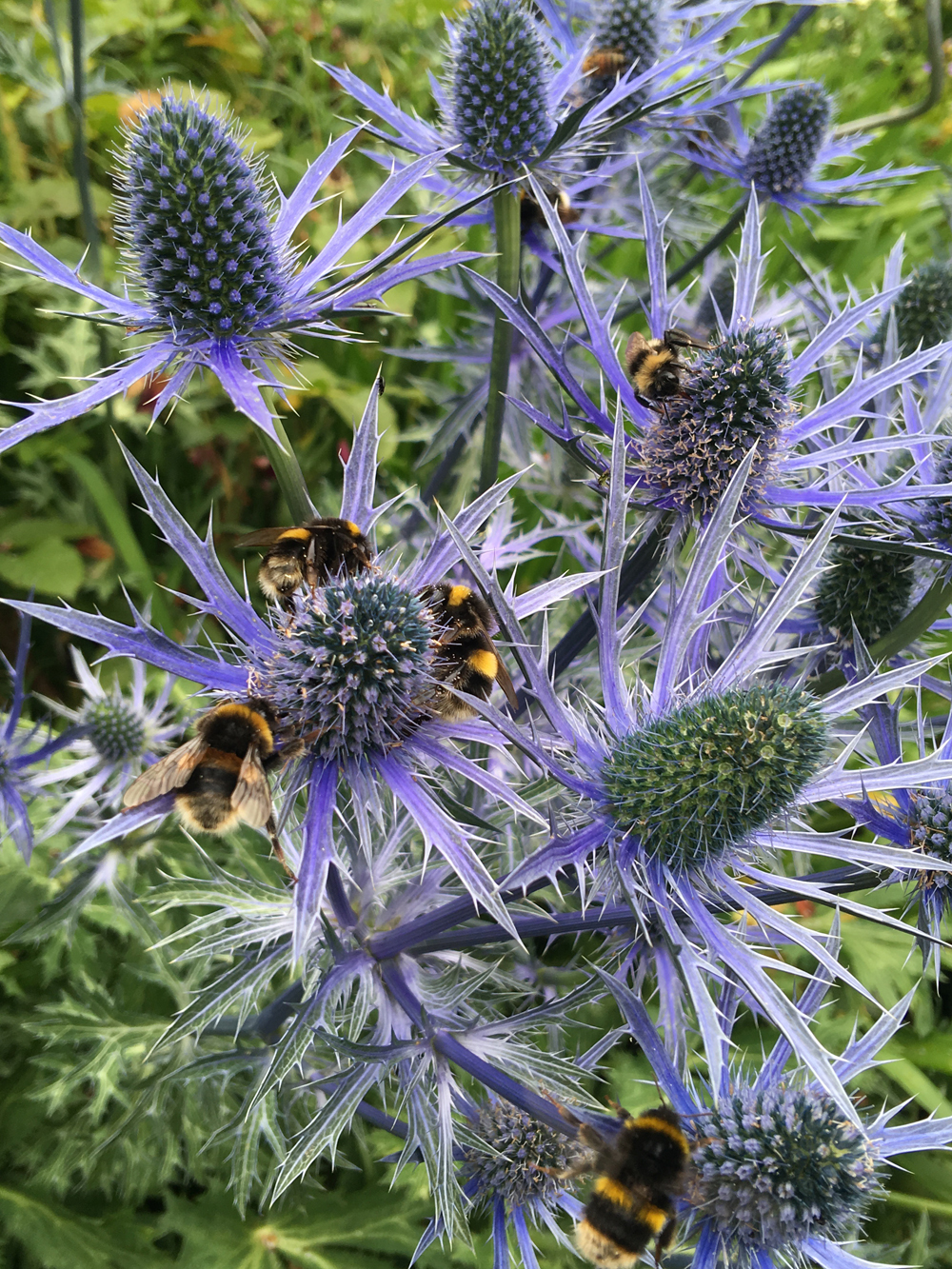 Zinging the blues in the garden! 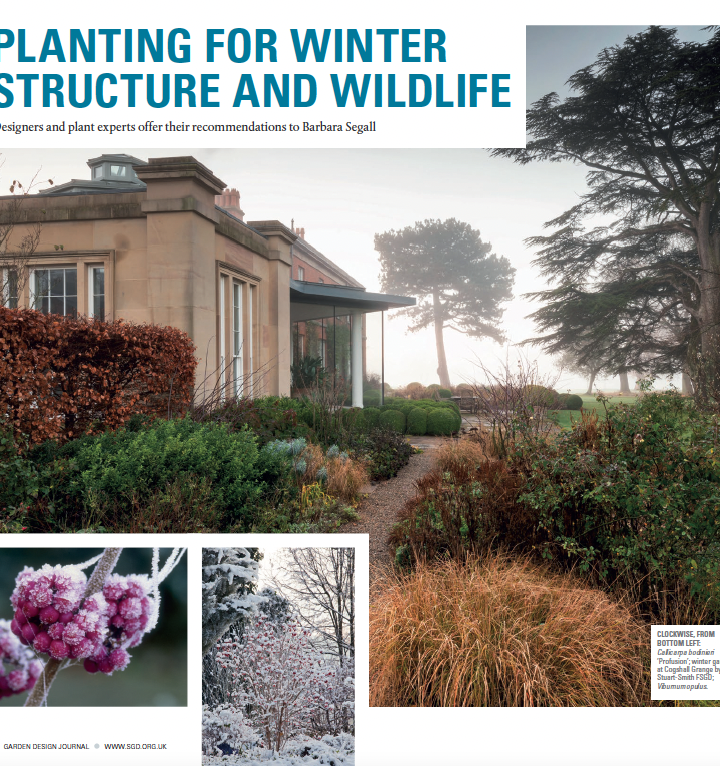 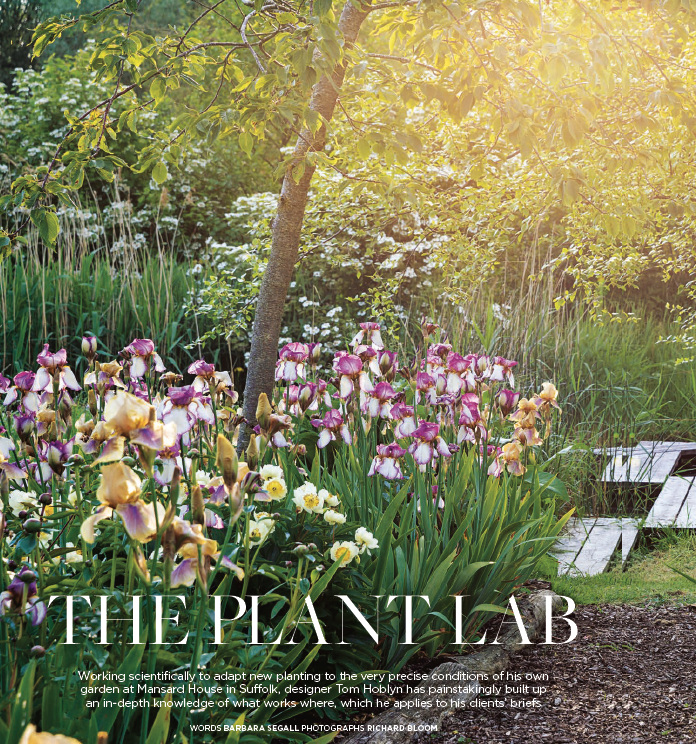