My double helping of the seasonal ‘Snowdrop Reviver’ came from an afternoon at Easton Walled Gardens, Grantham, Lincolnshire (www.visiteaston.co.uk), preceded by a morning at Hodsock Priory, Blyth, in Nottinghamshire, which I have written about in Snowdrop Double Part 1.

Both places – their owners and the wonderful collections of plants they grow – offered more than enough to lift my spirits.

So following a morning of snowdrops at Hodsock Priory I nipped down the A1 to spend the afternoon at Easton Walled Gardens, Grantham, Lincolnshire, with Lady Ursula Cholmeley and her garden team.

The story of the decline and fall of Easton Hall and its garden is well-documented. It is a bitter-sweet tale of a house that has vanished except for parts of the Gatehouse, the Stable Yard and the formal gardens. That any of this survives is due to the enthusiasm and dedication of members of the 13th and 14th generation of the Cholmeley family.

When the Cholmeleys began to reclaim the 400-year-old garden in 2001 it was in ruins, with buildings on the At Risk Register and self-sown trees swamping the grounds. It was, in fact, the moment juste: a few years later and it would have been beyond recovery.

Snowdrop Week at Easton runs until 19 February and for someone such as me, who likes snowdrops en masse in sheet-like profusion, it was perfect. Snowdrops are everywhere on banks leading towards the River Witham, and again on the slopes of the Snowdrop Bank. Get there as quickly as you can… 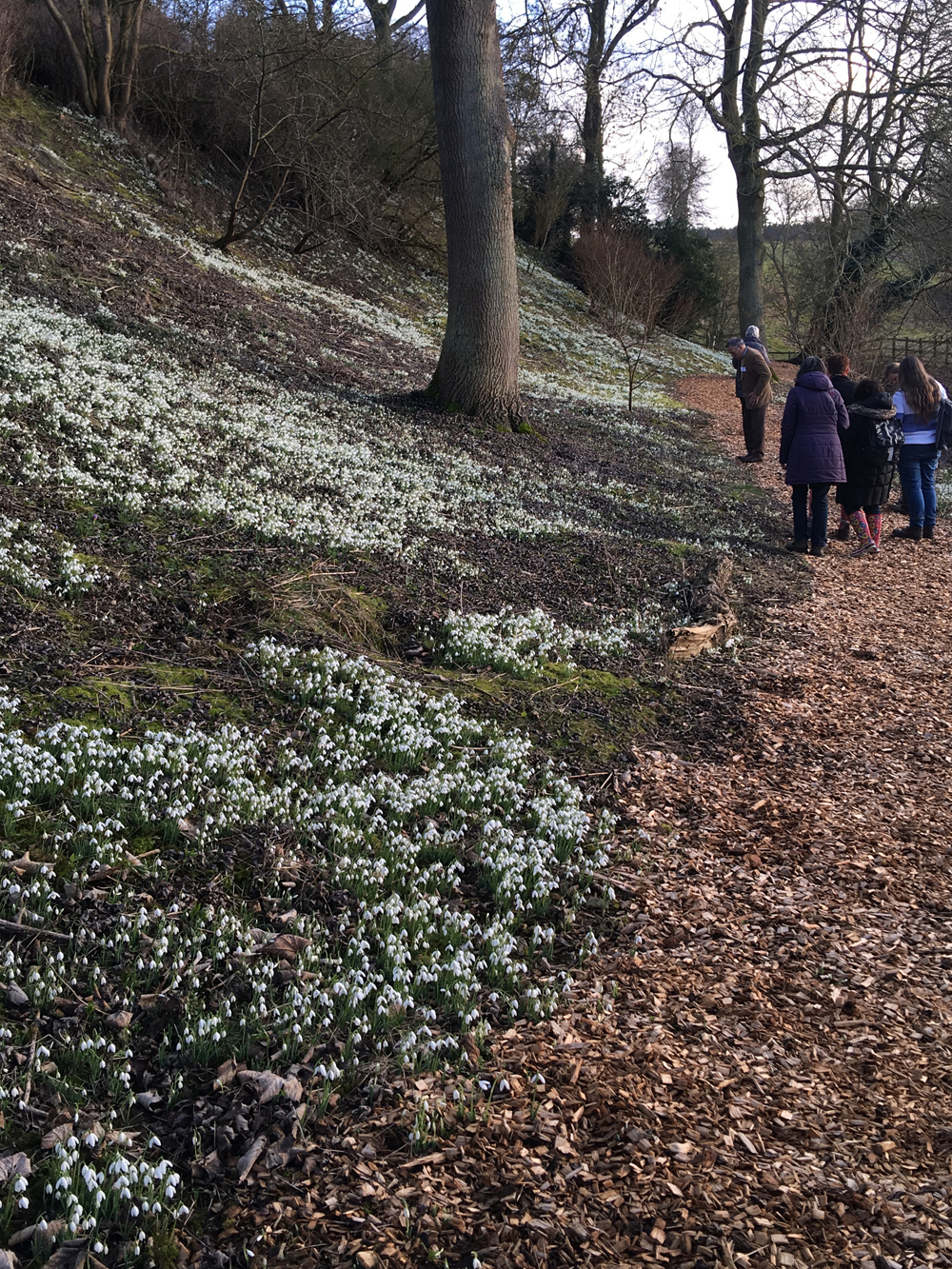 Snowdrop walk alongside the Snowdrop Banks.

In the entrance to the Stable Yard and in various other places around the restored buildings at Easton Lady Ursula and her team have placed snowdrops in eye-catching positions. Some are flying high above the entrance to the Stable Yard, while others are in containers or set against the wall. On a table outside the Gatehouse Lodge holiday cottage (www.thegatehouselodge.co.uk) there are pots of winter flowers that give the message that winter is colourful and fragrant and that spring is not far behind. 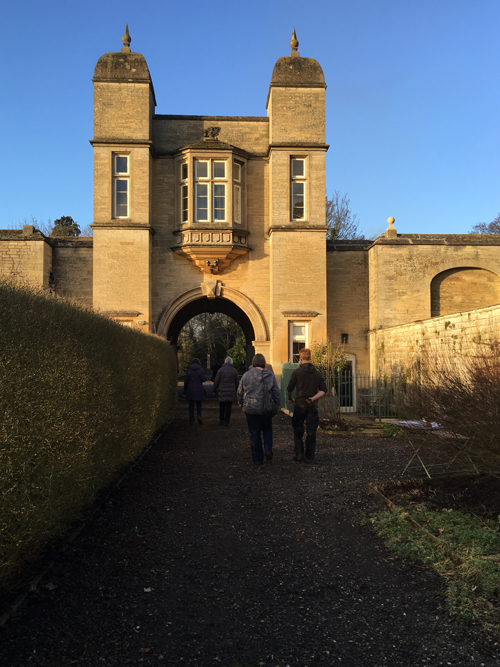 Room with a view: The Gatehouse Holiday Cottage. 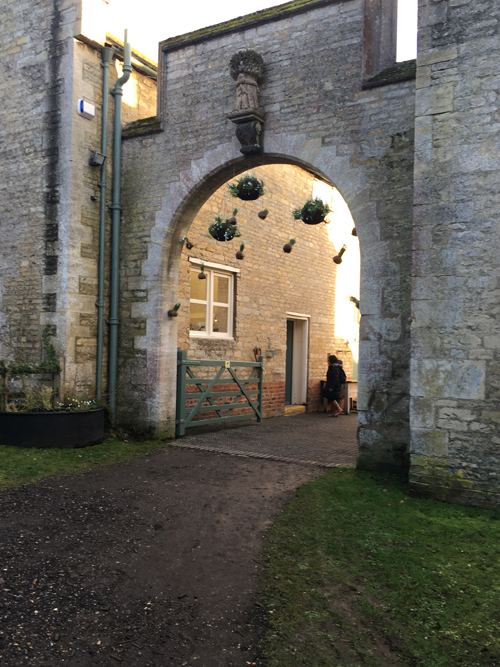 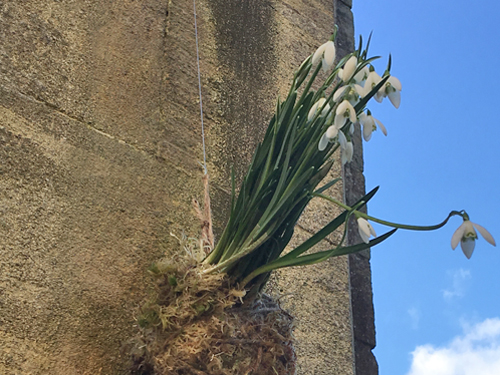 Flying high at the entrance to the Stable Yard. 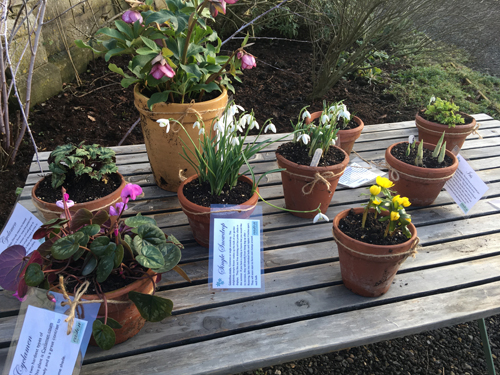 The beauty of the season distilled into a table-top display for Easton’s garden visitors.

A winter show that I particularly enjoy is offered by the ghostly stems of Rubus cockburnianus, here planted against one of the surviving and restored walls. 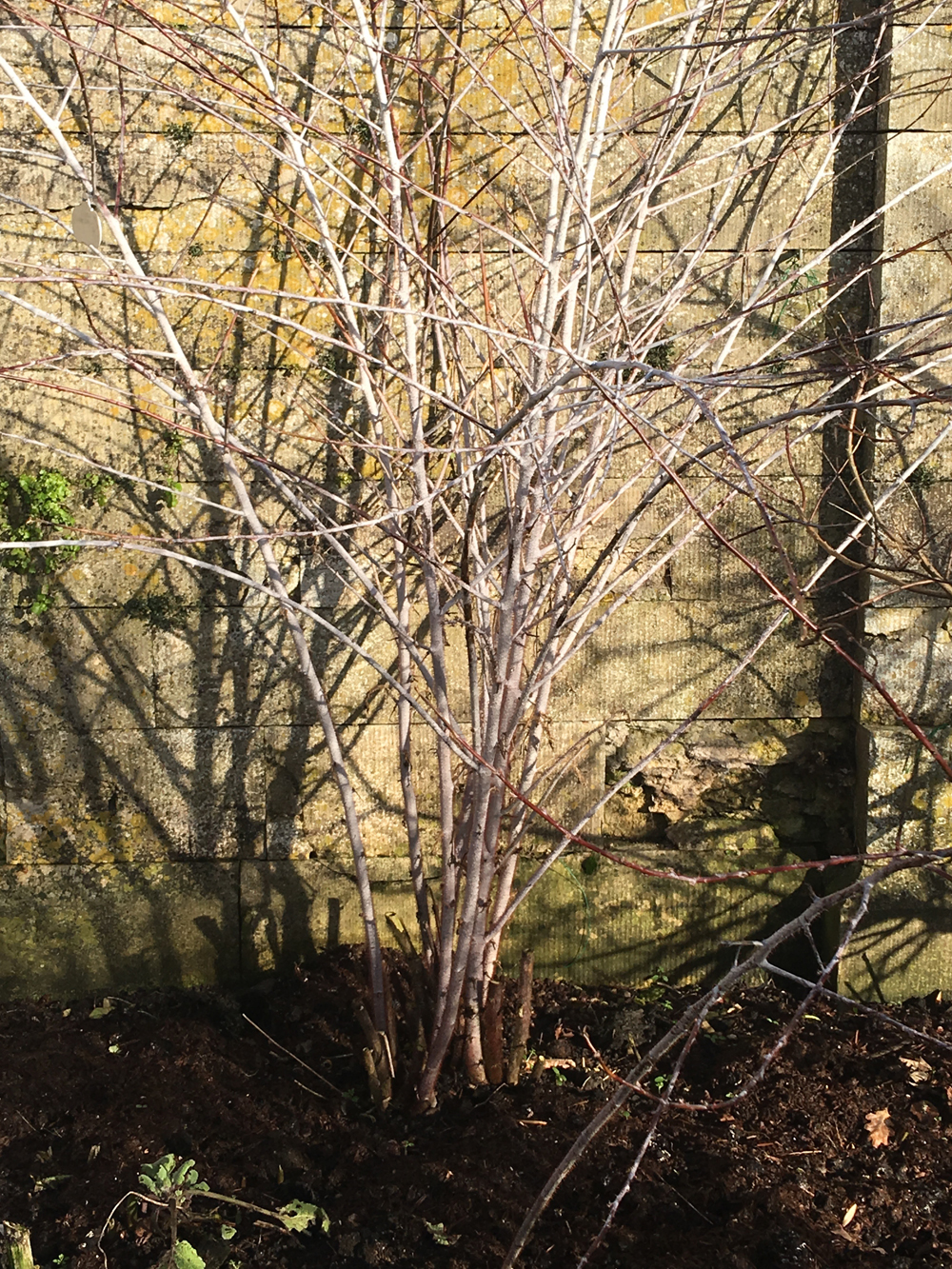 Ghostly stems of Rubus cockburnianus show up well against the mellow wall.

In winter the box spirals that are central to the White Space Garden, a new garden created by Lady Ursula, based on a Charles Jencks design (The Garden of Cosmic Speculation, near Dumfries, Scotland fame), hold your attention. In summer swirls of white-flowered annuals and perennials flow in and around the box spirals. 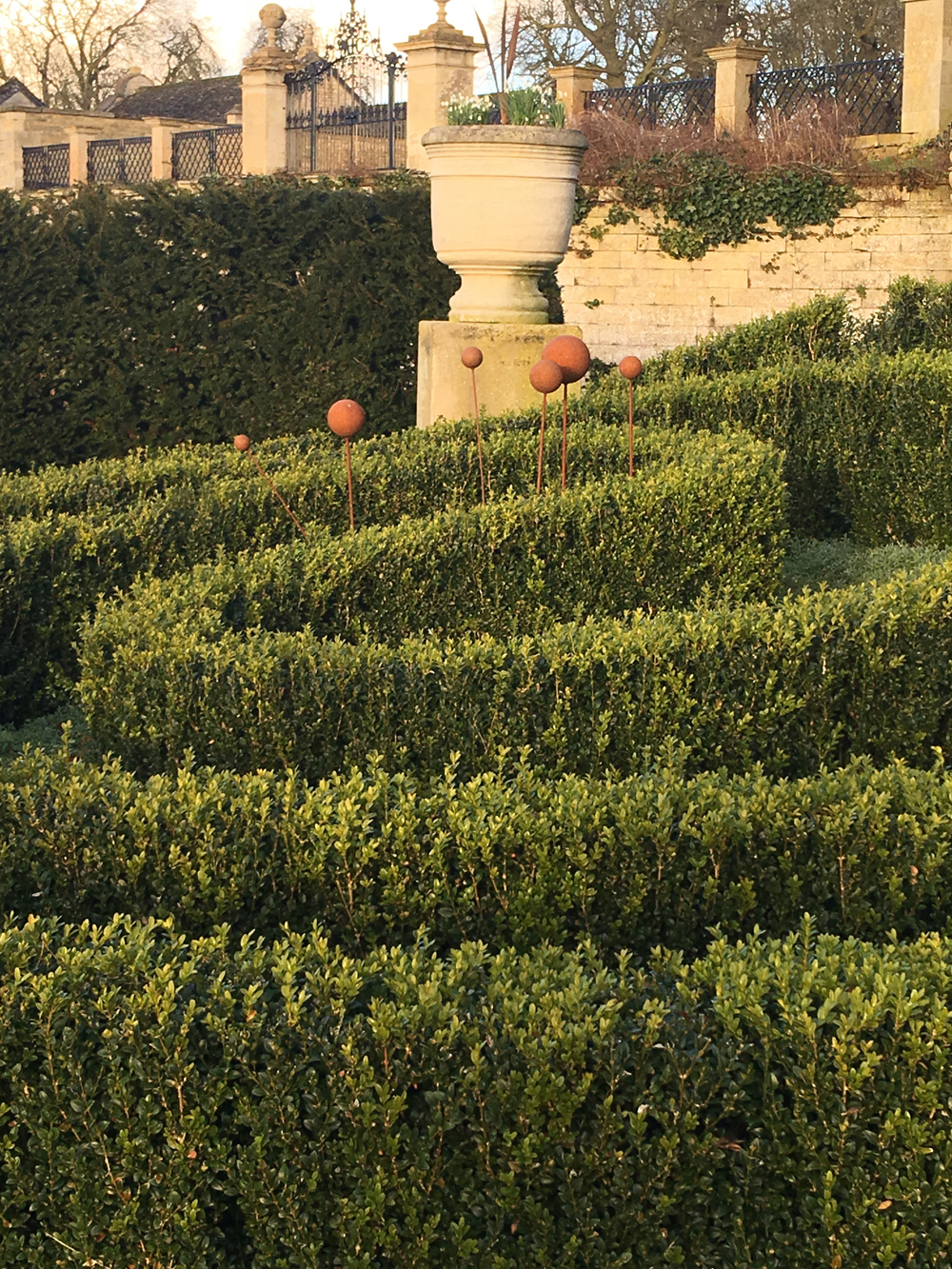 If you miss the snowdrop week at Easton, there will still be much to attract you there during the year. Best of all in summer is the floriferous picking garden that is dominated by masses of sweet peas. It was great to see that the beds and borders soon to be filled with seedlings and young plants, are now being dug, manured and readied for planting up, when the moment is right.

In early February 2017 they are empty, but because I visited in 2016 I know that they will soon be flourishing and ready for their high summer season. 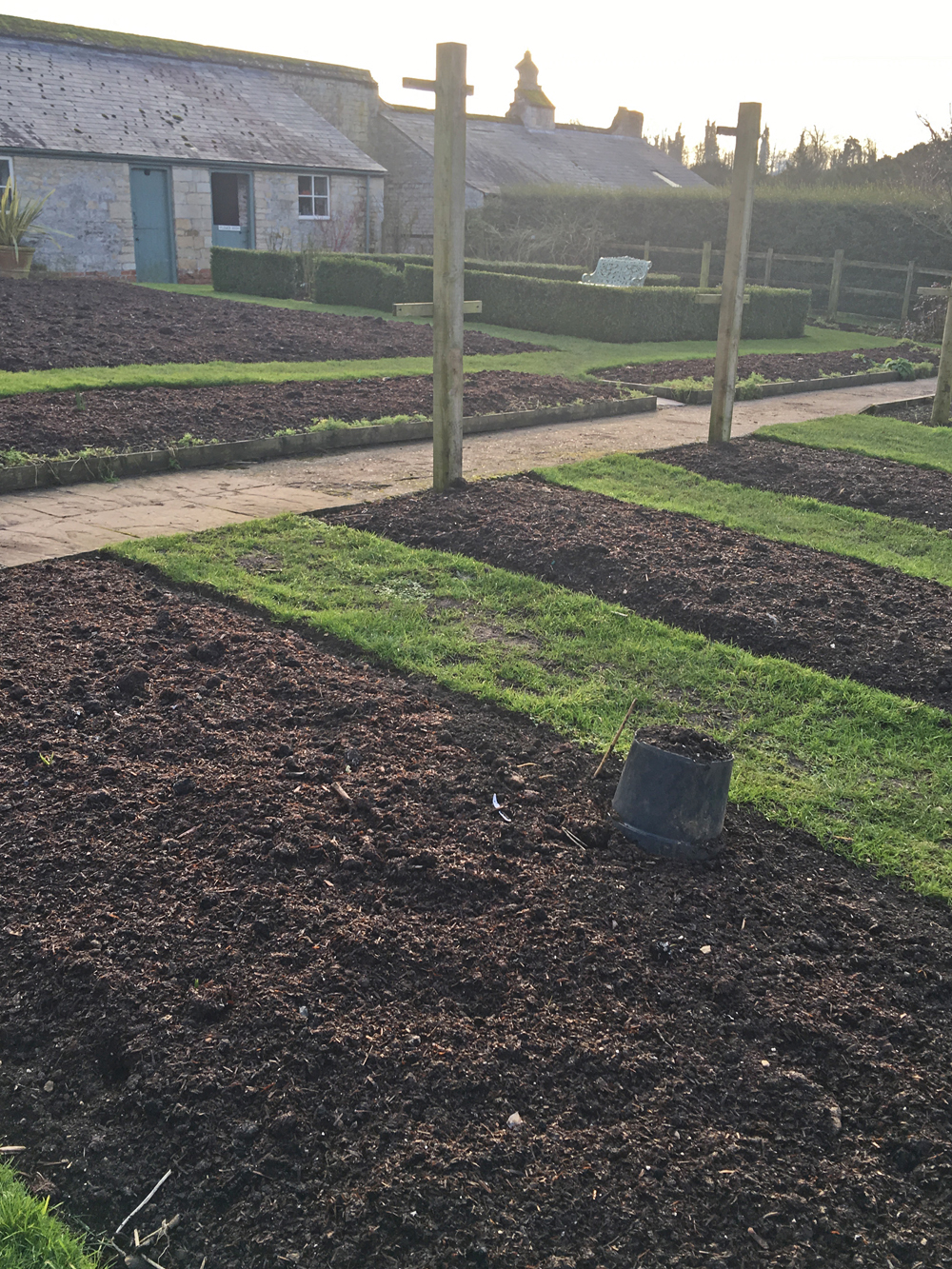 Getting ready: empty borders in anticipation of a summer season of flowers for cutting, including masses of sweet peas. 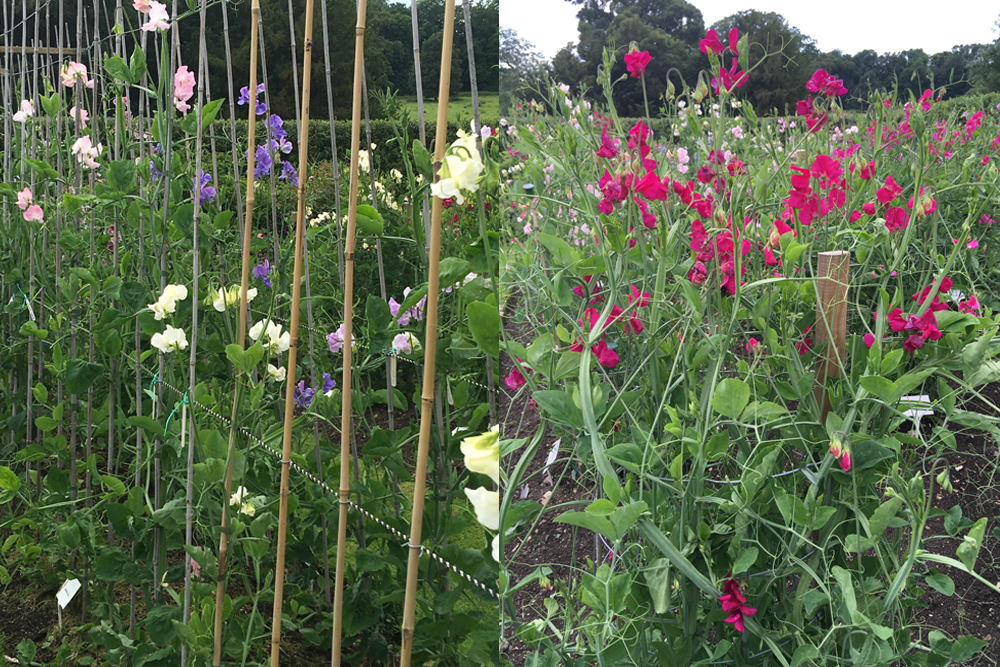 Previous Post: « A snowdrop double (Part 1)
Next Post: In my colander… a regular tale of harvesting and eating »