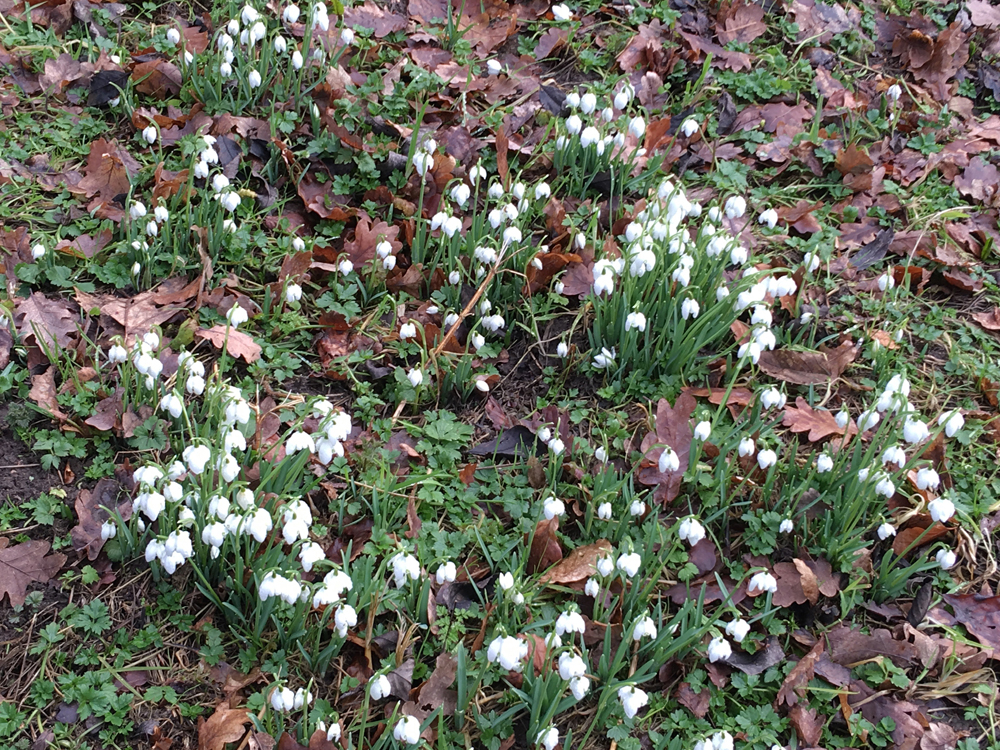 This year my usual garden ‘joie de vivre’ has been slow to ignite. It is taking me a lot longer than usual this winter to get into a hopeful mood –but that all changed in early February.

The ‘double’ came from a morning at Hodsock Priory, Blyth, in Nottinghamshire (www.snowdrops.co.uk) and an afternoon at Easton Walled Garden, Grantham, Lincolnshire (www.visiteaston.co.uk), which I will write about in Snowdrop Double Part 2. Both places – their owners and the wonderful collections of plants they grow – offered more than enough to lift my spirits.

Snowdrops are one of the northern hemisphere symbols of hope or of something new, associated with the early February religious celebration of Candlemas, so maybe something of that was in the air at Hodsock Priory and Easton Walled Garden. 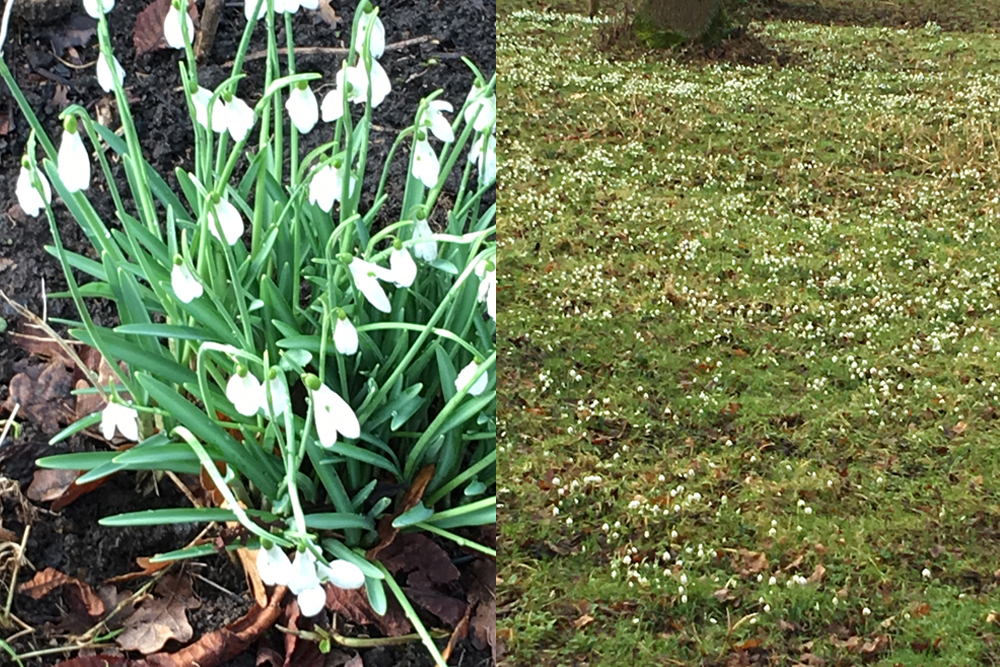 It is easy to believe that there are over 4 million snowdrops at Hodsock Priory.

I last visited Hodsock in February 2015, when there was snow lying on the ground and around the snowdrops. This year the drive from Suffolk to Nottinghamshire was not promising: grey skies followed by sleety rain. But the following day the sky was blue, there was no snow and the snowdrops were starting to show themselves and it was plain to see that this was going to be a good snowdrop season at Hodsock.

Hodsock Priory’s annual Snowdrops Event is now in its 26th season. It began almost by accident in 1991 with one Snowdrop Sunday that attracted some 700 visitors. This year their snowdrop season, which began on 4 February, is set to run until 5 March and is likely to attract 15,000 to 18,000 visitors. Nine generations of the same family – the Mellishes and Buchanans – have lived in this property since 1765. Our hosts for the day, George and Kat Buchanan, are its current custodians. One of the early visitors offered the feedback: “Never lose the magic”… and it is plain to see from their enthusiasm that George and the team at Hodsock will not lose sight of that advice. 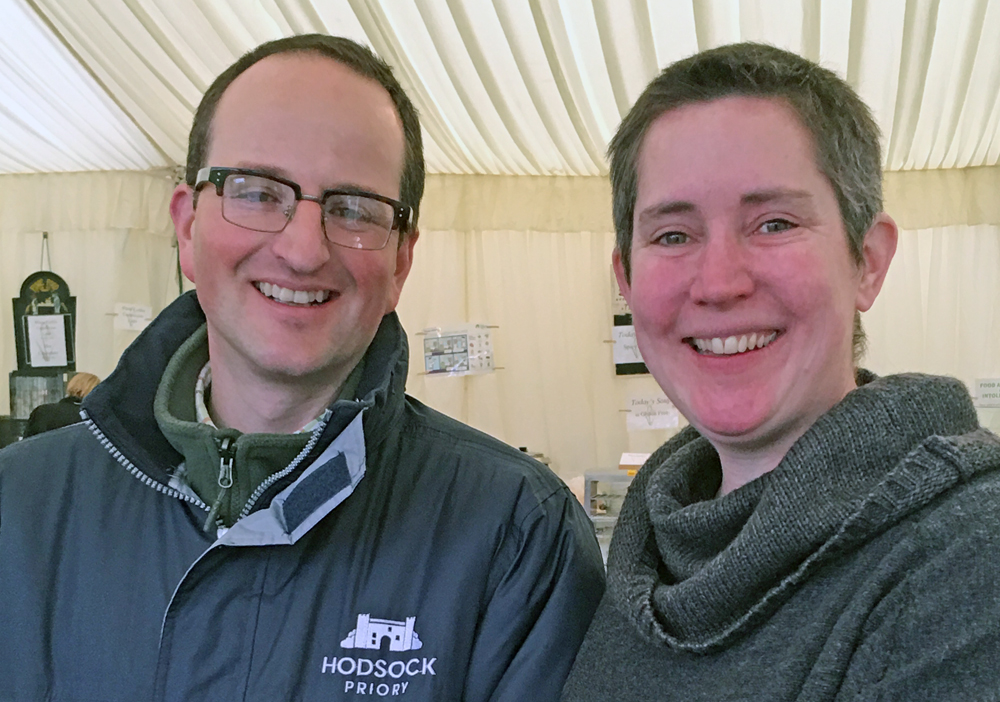 George and Kat Buchanan live at Hodsock Priory with their four children.

That there are over 4 million snowdrops is not hard to believe. They are everywhere… there are snowdrops in drifts in the woods, they are clustered along garden paths and spread like a pointillist painting across the grass in places. In addition there is a wonderful open, outdoor fire and café, as well as an indoor shop and restaurant, where you can buy snowdrops, wonderful hellebores and other ornamental winter plants.

The woods have been cleared of sycamore and ash and the carpet of snowdrops beneath is thriving in the open conditions. Although all the snowdrop action is at ground level the remaining trees in the wood are majestic, including a 500-year-old oak, thought to have been planted at the same time as the gatehouse was built. 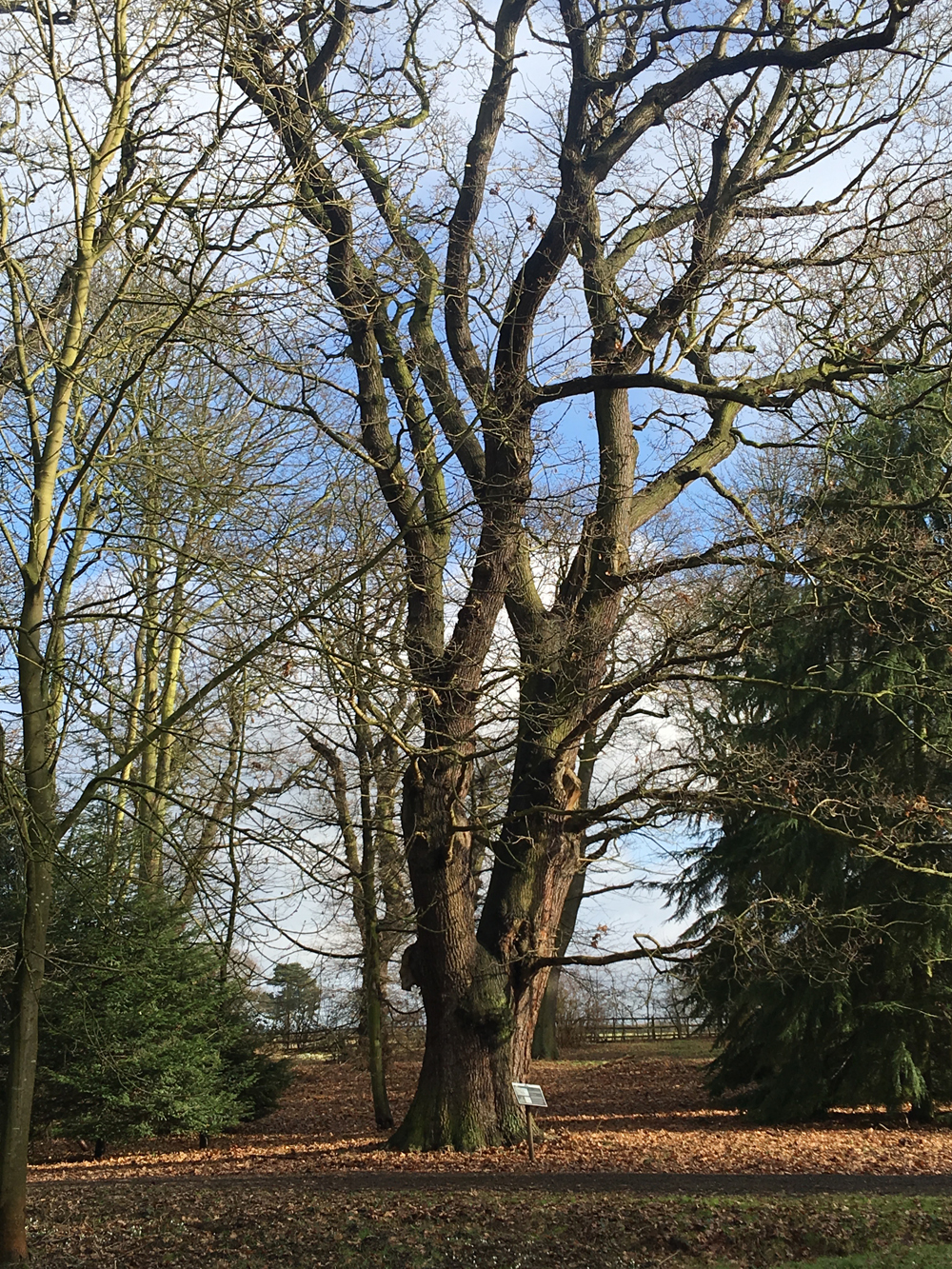 A 500-year-old oak is one of the majestic trees at Hodsock Priory.

And that is the additional beauty of Hodsock Priory – once you have seen the snowdrops in the woods, the walk takes you along a path planted with fragrant winter shrubs, winter-flowering trees as well as more drifts of snowdrops. There is also a grove of goblet-shaped, white-stemmed birches alongside the lake. Last time ice on the water obscured the mirror image view of the Priory. This time the reflection was just perfect. 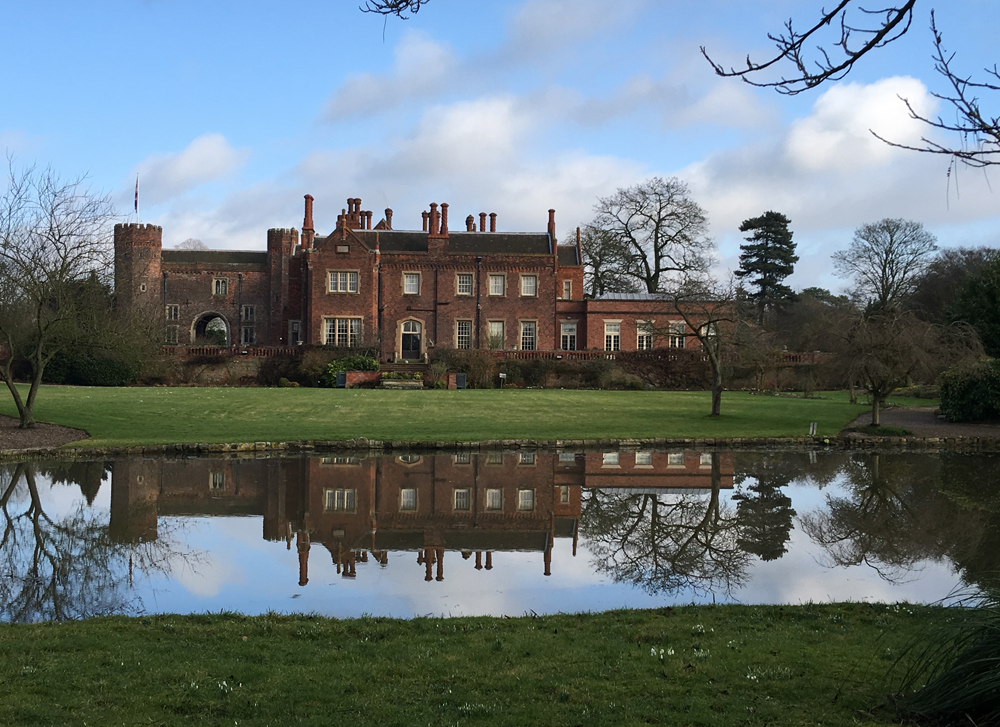 A mirror image of Hodsock Priory in the lake.

Winter colour and fragrance keep me going through the so-called quiet times in the garden. I have just two plants of winter sweet (Chimonanthes praecox) and just two of the fragrant Christmas box (Sarcococca hookeriana var.humilis). Here there are several of the former and swathes of the latter, offering a heady perfume to the garden walk. 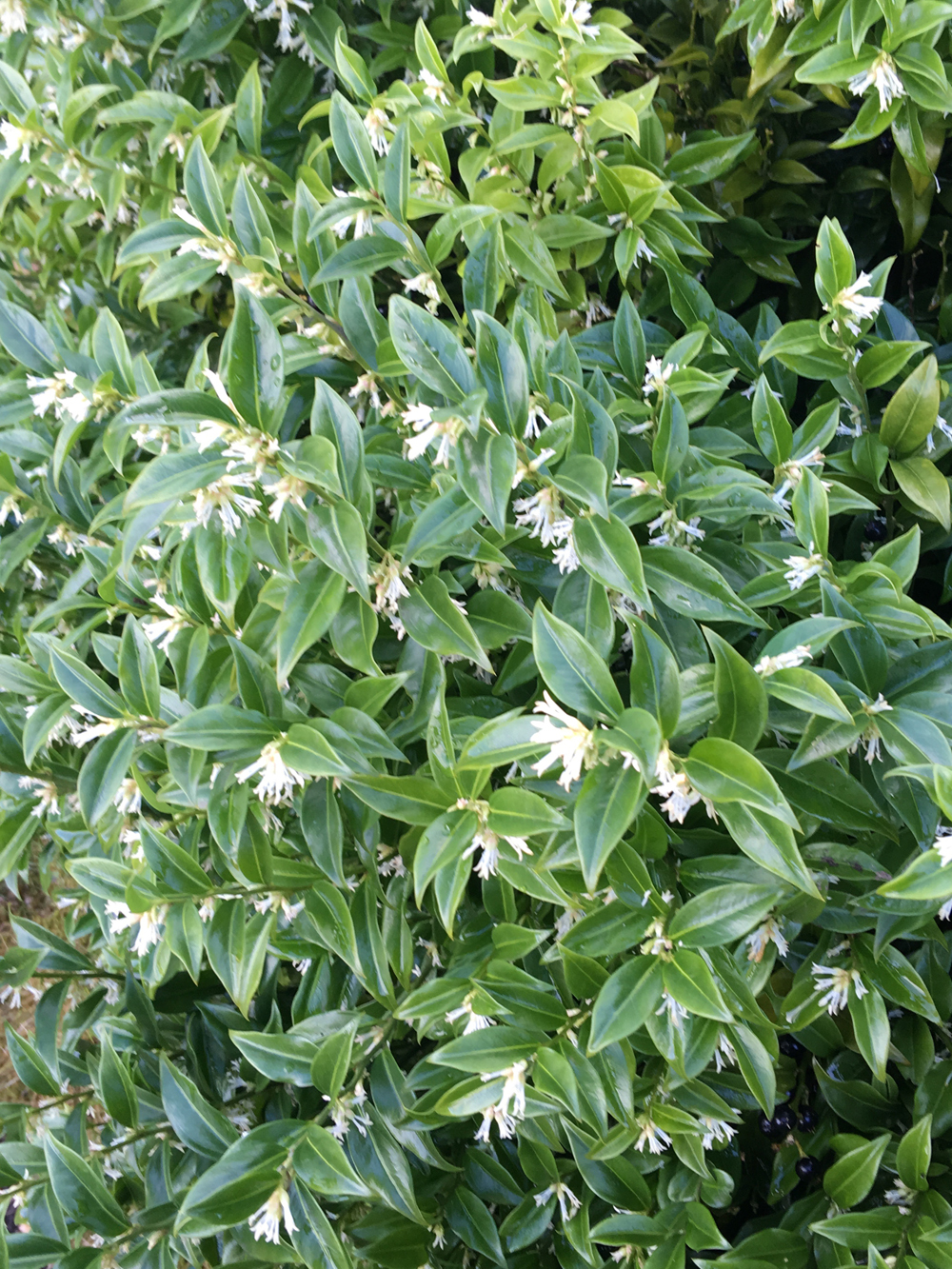 Swathes of Christmas box offer intoxicating scents along the garden path that leads you alongside the water.

Two other favourites at this time are the Narcissus ‘Cedric Morris’, that makes a really early splash of yellow in a garden and the magenta flowers of Cyclamen coum. Suffolk, the county where I live, was also home to the artist and plantsman Sir Cedric Morris. I am glad that I have a pot or two of a snowdrop named for him, ‘Cedric’s Prolific,’ and my aim now is to complement this with a drift of his narcissus! 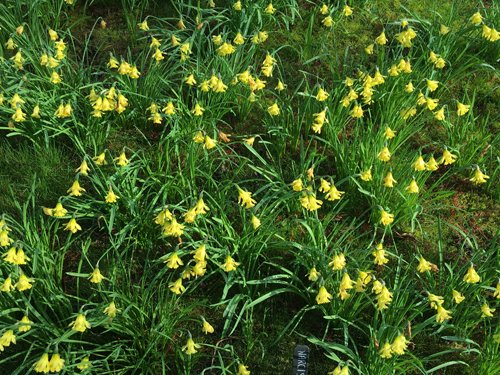 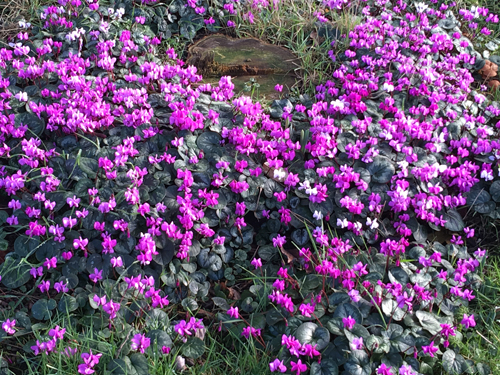 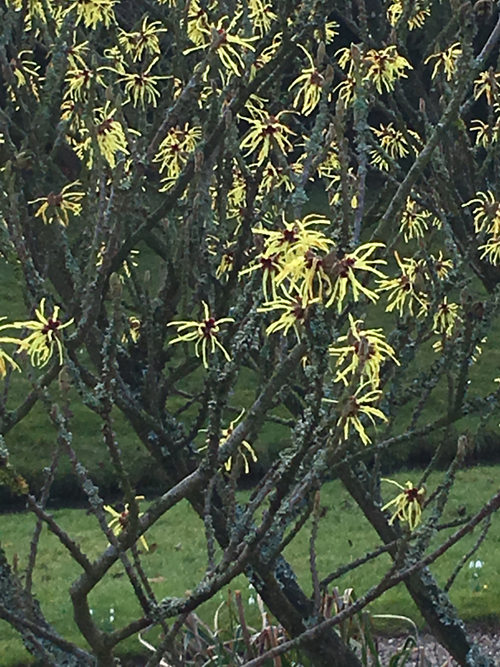 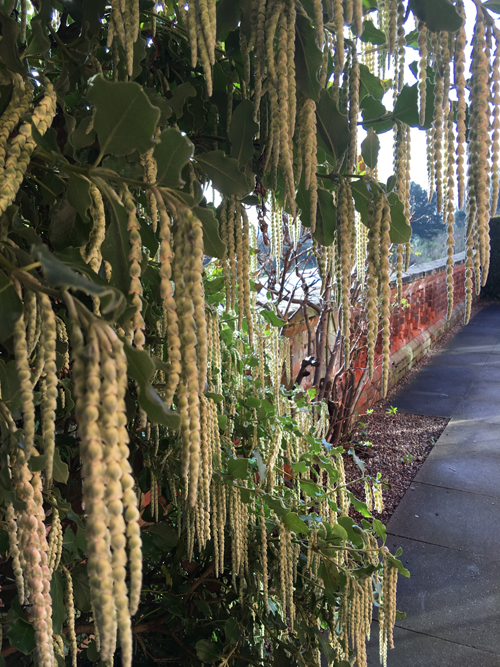 Hodsock Priory is available for group visits on a Wednesday or Thursday in March, April, May, June, September, October or November. It is also an award-winning wedding venue.

Brighten up your winter by visiting Snowdrops at Hodsock and come back for the bluebells on the weekends of 29/30 April, Bank Holiday Monday 1 May and 6/7 May. 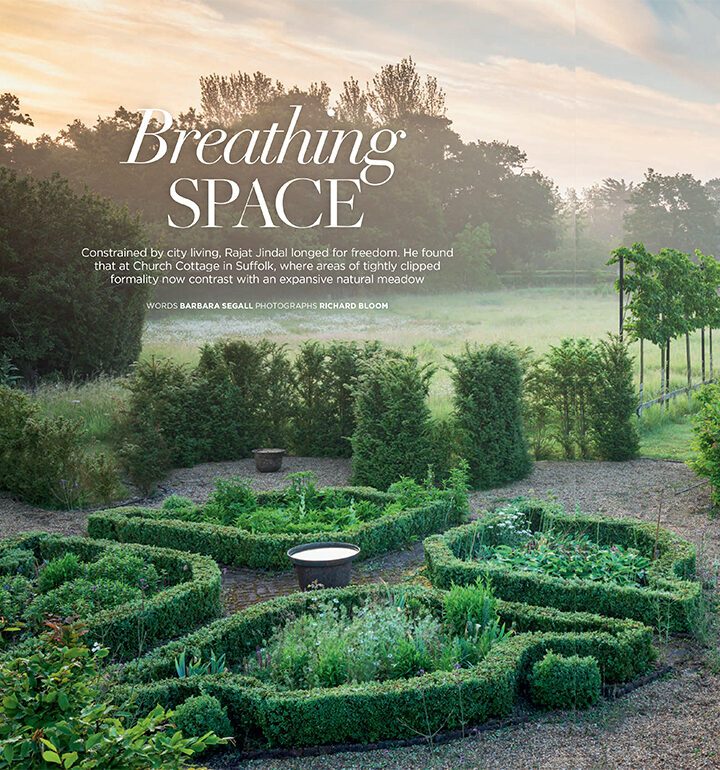