I love going to flower shows to see how the plants that I enjoy growing are used by designers and to learn from the expert nursery men and women how to grow them to perfection (theirs are perfect, mine not always). Shows offer inspiration and often provide a new twist for my own garden and allotment. And at many shows it is possible to buy plants and seeds.

The first of the RHS Flower Shows on my list in 2017 was the 32nd RHS Malvern Spring Festival (@RHSMalvern), which drew to a close on Sunday. I am sorry that my thoughts and notes from it are too late to be useful for you this year.  I hope they might inspire you later in the year to go to the RHS Malvern Autumn Show (23–24 September). Full details from rhs.org.uk or there is next year’s Spring Festival.

Whatever you decide, book accommodation as soon as you can. There are delightful B&Bs and they get snapped up swiftly. I stayed at Orchard House, South Parade, Ledbury (orchardhouseledbury.co.uk), where the fragrance of the wisteria that clothes the house’s facade filled my sunny south-facing room. 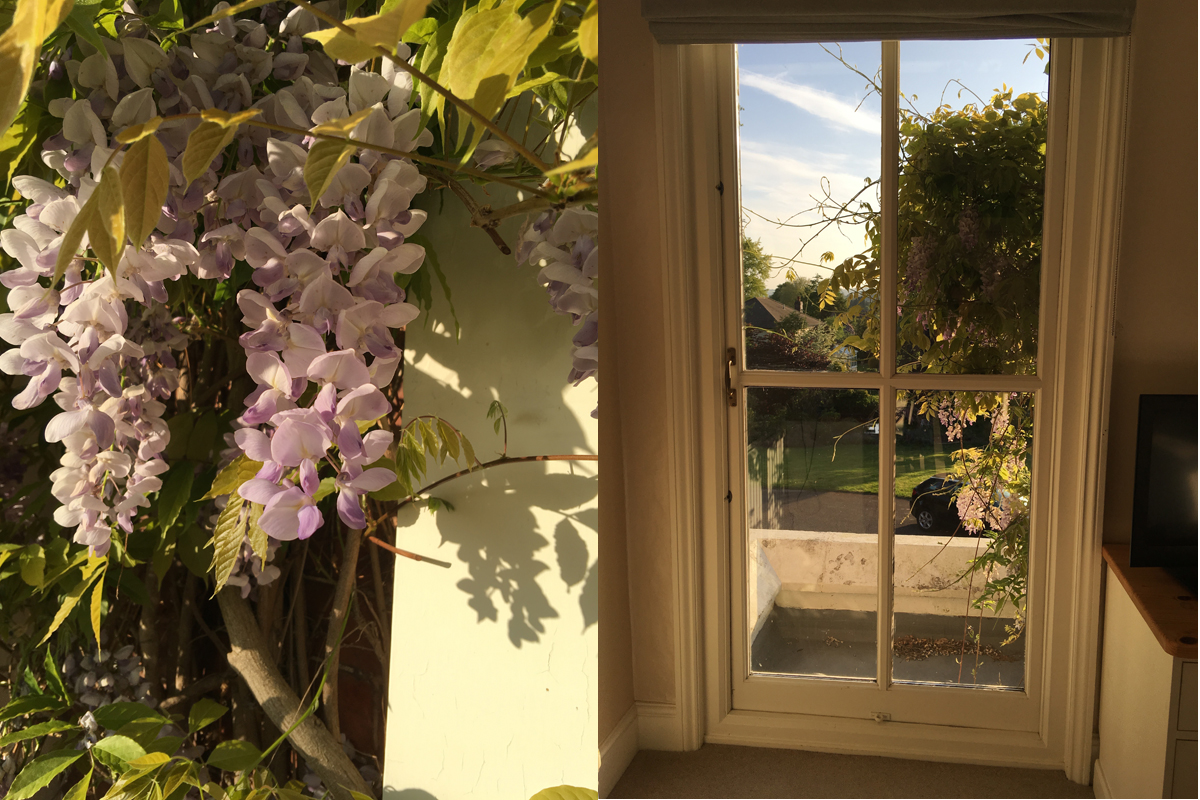 Fragrance from the wisteria ‘draped’ on the front of the house filled the room.

Plants are the main attraction and the Floral Marquee was spectacularly large this year. At 190m, it was the biggest ever at an RHS Malvern Spring Festival. It was packed with plants from a magnificent 70 nurseries, including five first-timers and three or four celebrating significant anniversaries at the show and in their own lifetimes. Some 30 gold medals were awarded in the Floral Marquee. One of the ‘veterans’, Hampshire Carnivorous Plants (www.hantsflytrap.com), was celebrating 20 years at this show. They won a Gold Medal and were awarded the accolade of Best Exhibit in the Floral Marquee. Their new carnivorous plant offering is Sarracenia ‘Scarlet Bell’, a compact trumpet-shaped fly-catcher with bright red flowers that does well indoors in greenhouses or conservatories. 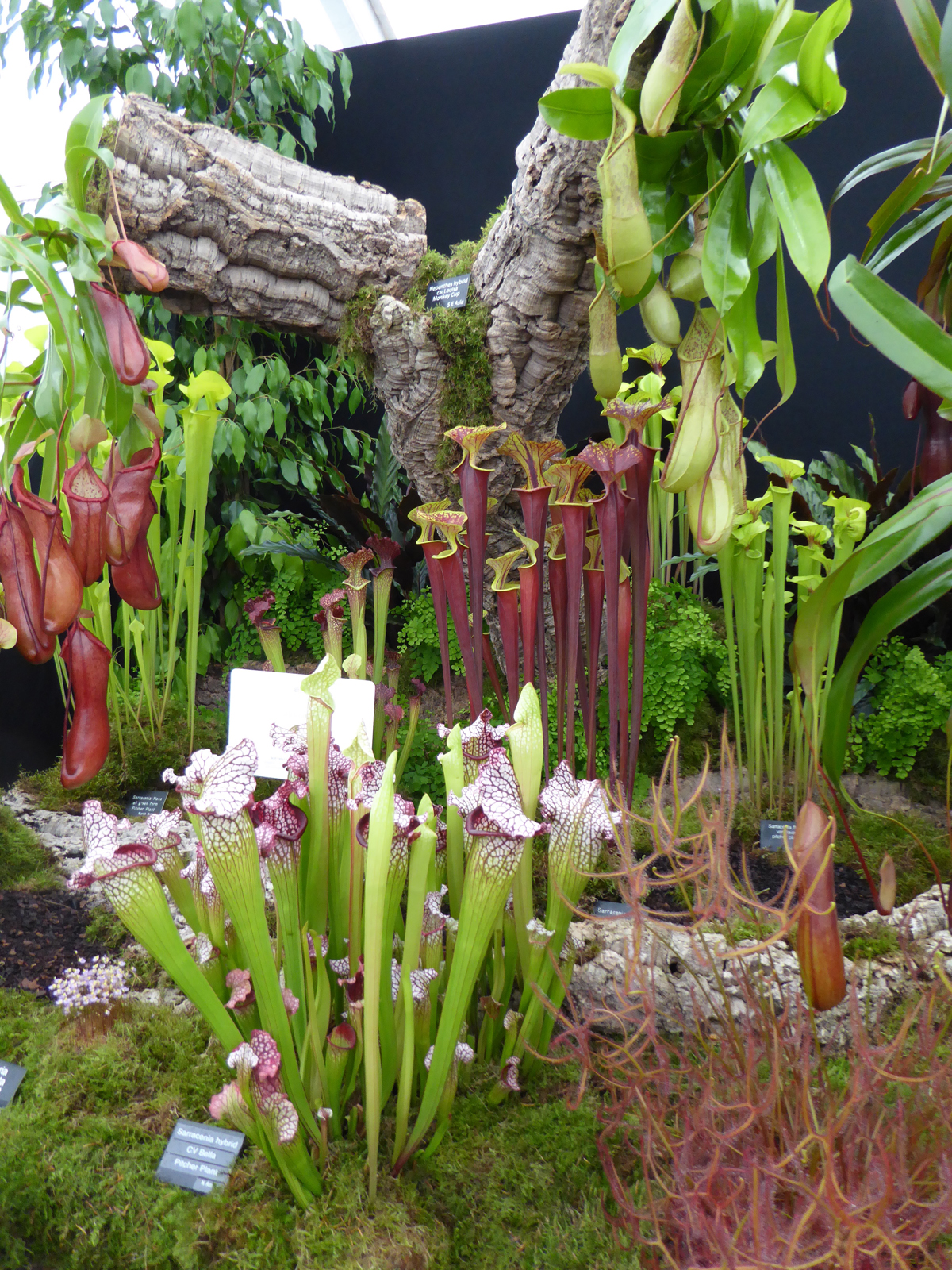 Hampshire Carnivorous Plants won gold for their striking exhibit. I have several growing in my greenhouse and they certainly earn their keep, lowering the population of unwanted insects.

Shows are a great place for nurseries to highlight introductions and I am often tempted by new plants. This time gold-medal winning Dibleys Nurseries (dibleys.com), who specialise in indoor plants such as begonias, African violets and Streptocarpus, offered a new fragrant streptocarpus, ‘Sweet Rosy’. Launched by brother and sister Gareth and Lynne Dibley, it is a large plant with a head of pink and white flowers that age to a purple and white. I was smitten. 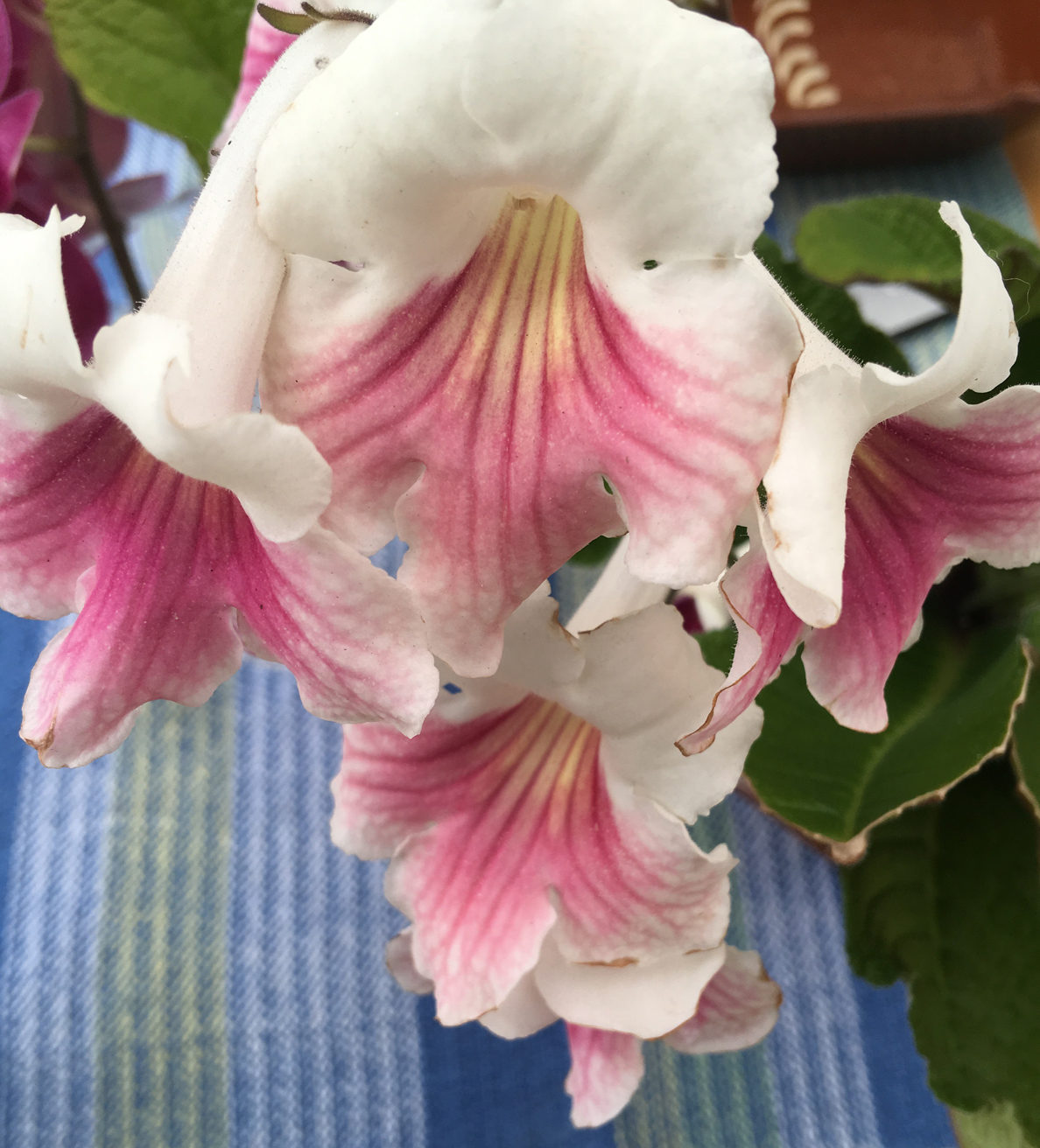 Dibleys Nursery’s new Streptocarpus ‘Sweet Rosy’ is settling in well to my garden room. This is one of the many plants launched at RHS Malvern Spring Festival 2017.

At the heart of the Floral Marquee was The Plant Finder Parlour created by broadcaster and designer Joe Swift to celebrate the 30th anniversary of The RHS Plant Finder, a book that lists 76,000 plants and 470 nurseries. The Parlour also celebrates the plant hunters themselves, without whom our gardens would be less rich and colourful. Bringing two of them – Ernest Wilson and George Forrest – to life throughout the show was author and broadcaster Matthew Biggs (@plantmadman). 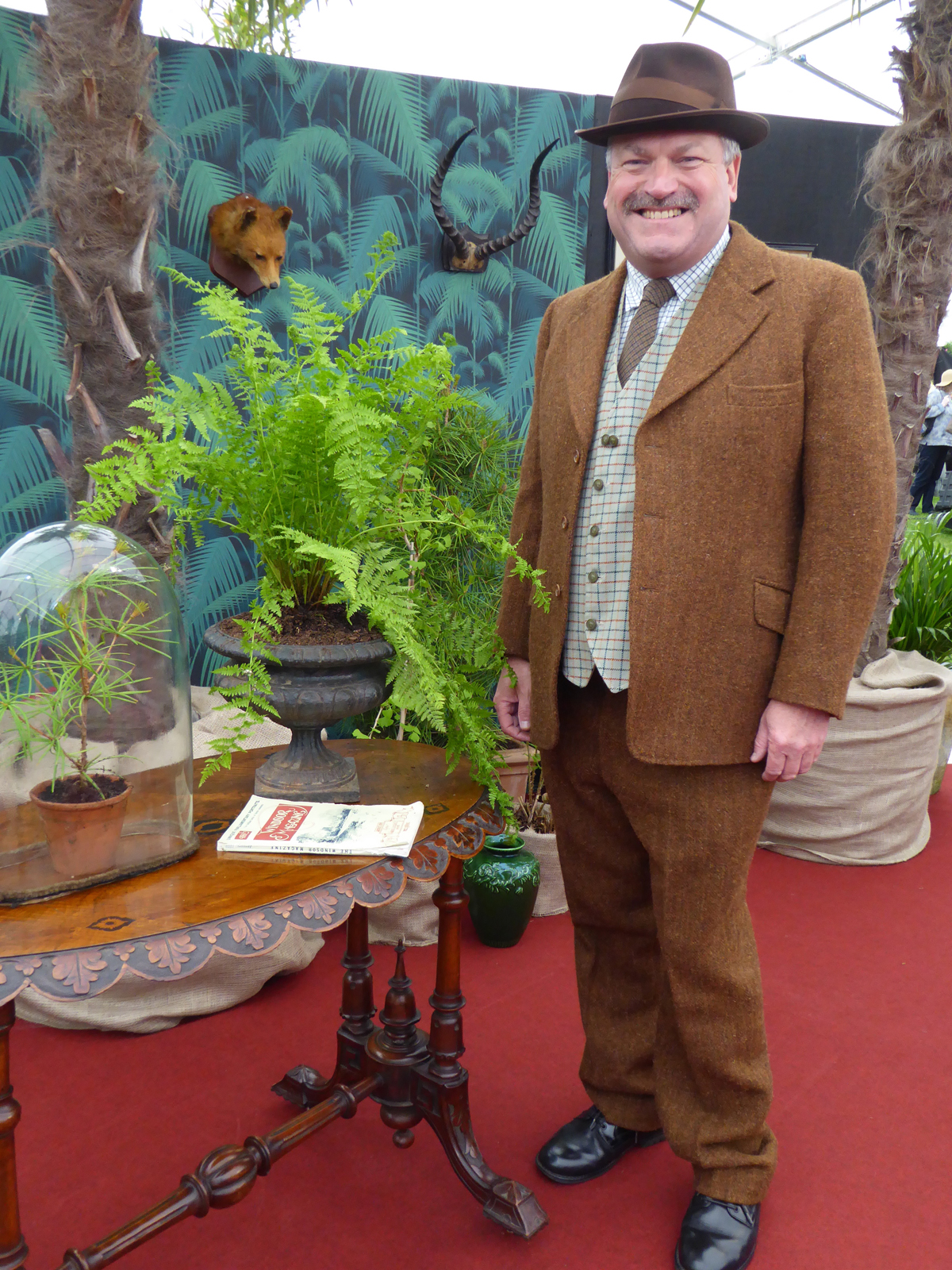 Matthew Biggs in character as Ernest Wilson in The Plant Finder Parlour designed by Joe Swift.

Last year at RHS Tatton Flower Show the RHS launched its Master Grower Initiative, with the 2016 award going to Hooksgreen Herbs, based in Staffordshire. This year Malvern’s first Master Grower recipient is Fibrex Nurseries. Established some 60 years ago by Hazel and Dick Key, it continues to be a family-run enterprise. Fibrex Nurseries have created an informative exhibit that outlines their history and showcases the plants in their various collections of ivy, perlargonium, tuberous begonias and Callistemon and tropical Hibiscus. 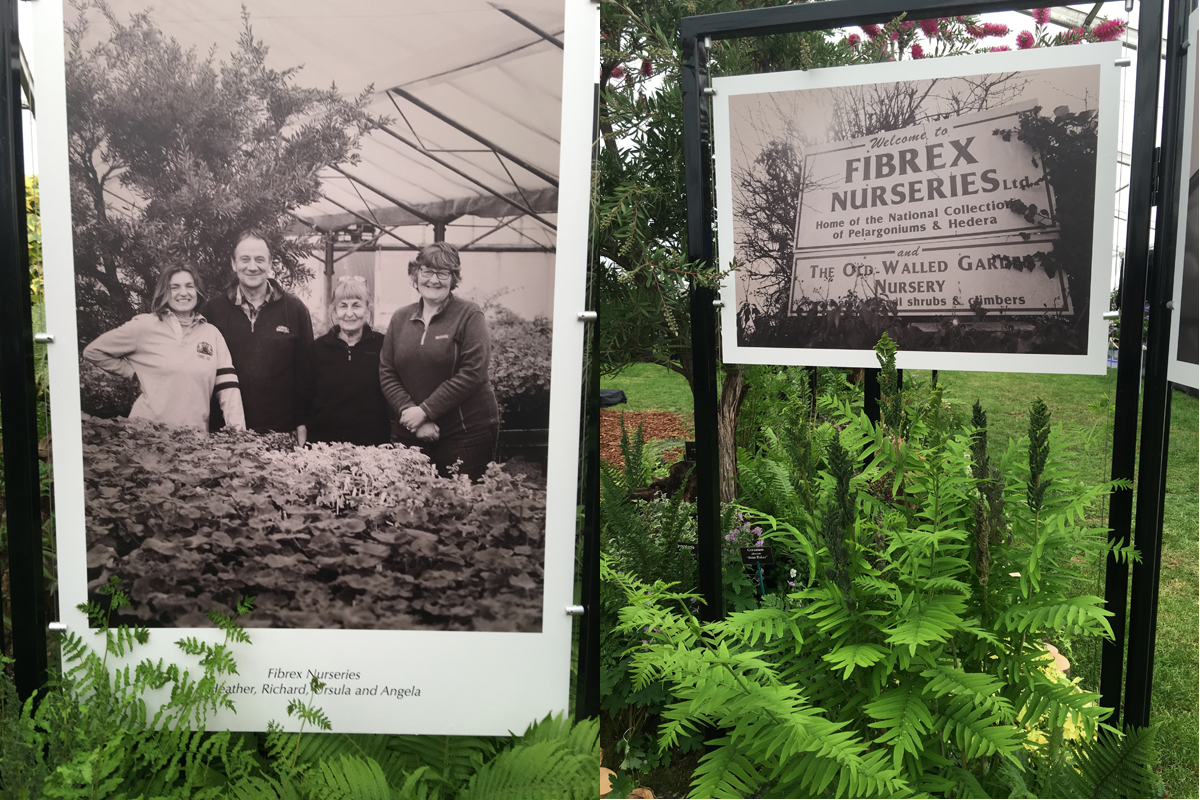 Master Growers 2017 was awarded to Fibrex, a family firm of plant specialists. Ivy, pelargonium, tuberous begonias, tropical hibiscus and Callistemon are among the plants in their various collections.

The show boasts a number of show gardens that are judged and awarded medal, such as Howle Hill Nursery’s ‘At One With… A Meditation Garden’ designed by Peter Dowle and Richard Jasper (www.howlehillnursery.co.uk).  Peter Dowle and his team planted the colourful back border of the garden so that it perfectly followed the line of the Malvern Hills, which rise above the showground. The landscape of this garden just melded perfectly with that sinuous line. It was also perfectly framed within a moongate ‘window’ onto the garden. 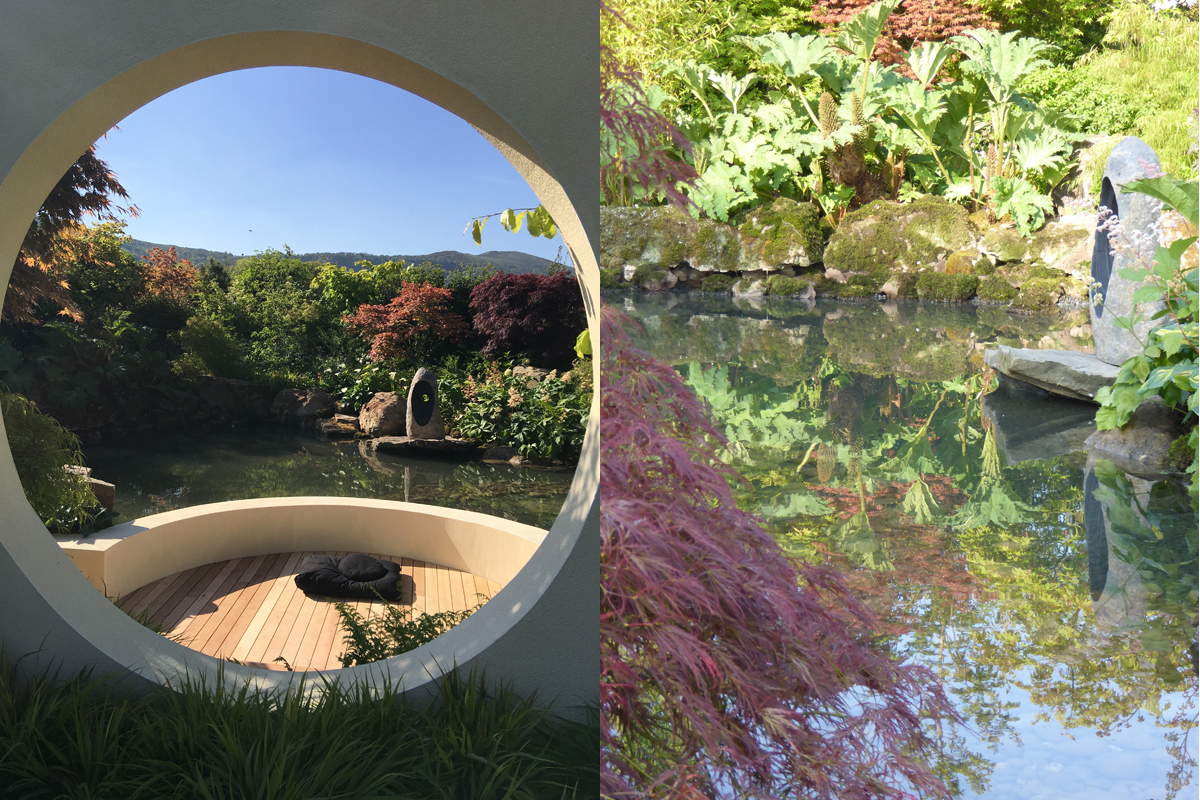 Through the circular frame you can contemplate this serene garden and see the wonderful foliage colour and the way it is reflected in the central pool of the garden.

Also a Gold Medal winner was ‘The Refuge (Garden) in aid of Help Refugees UK, designed by Sue Jollans. Sue told me that it was destined to be rebuilt at Warwick University, where young refugee students would be welcomed. 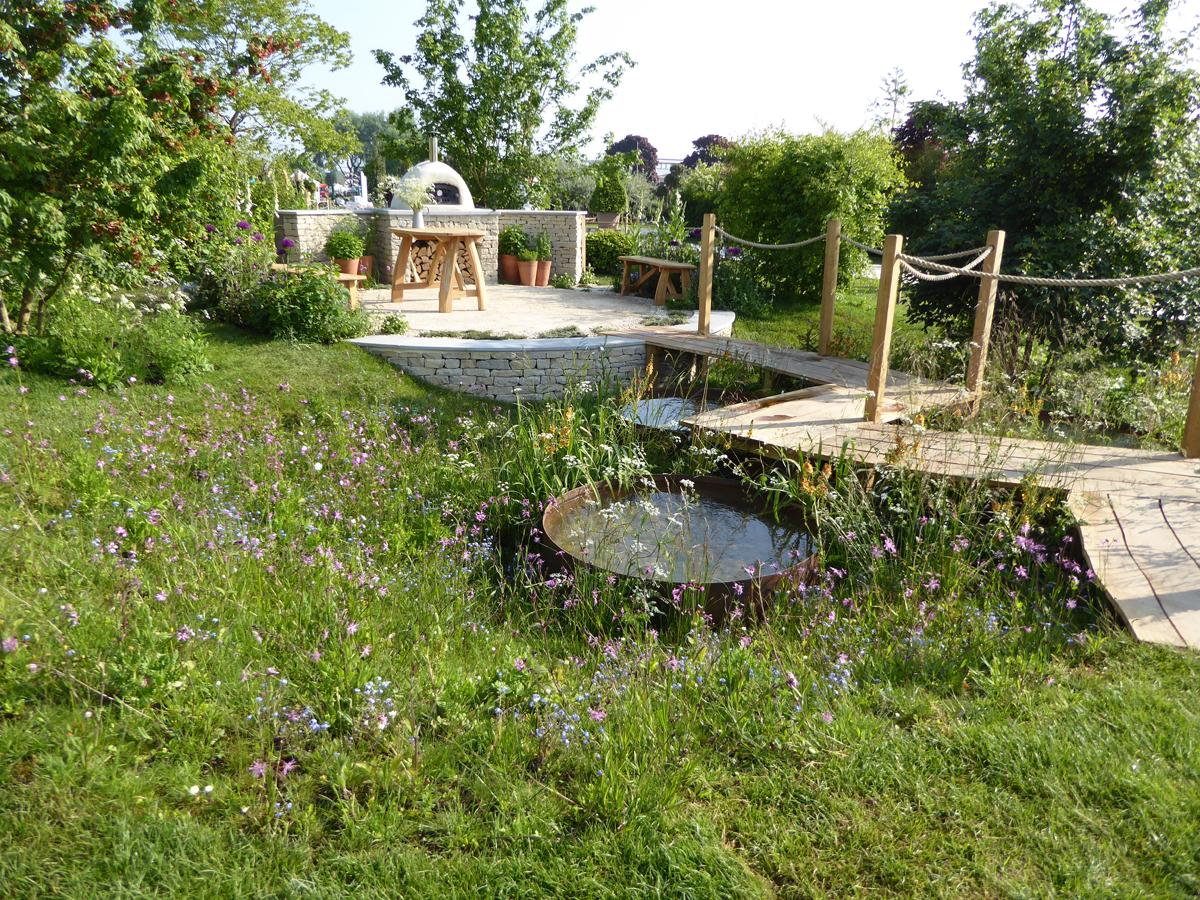 The Refuge (Garden) although lovely to look at as a garden, it depicted the dangerous zig-zag pathway that a refugee would experience, travelling across water eventually to find a place of refuge.

There were also small gardens that reflected the spa aspects of Malvern’s history. Stand-out winner of that category was an entry by two Russian designers, Denis Kalashnikov and Ekaterina Bolotova, who were mentored by RHS Gold Medal-winning designer Jo Thompson. The mentoring scheme is part of an international exchange between the RHS Malvern Spring Festival and the Moscow Flower Show.  Their ‘Molecular Garden’ represented the enclosed area of a spa where guests could relax in a separate space. I particularly liked the curves of the wooden seats and the shadows and shapes of the furniture and the plants. 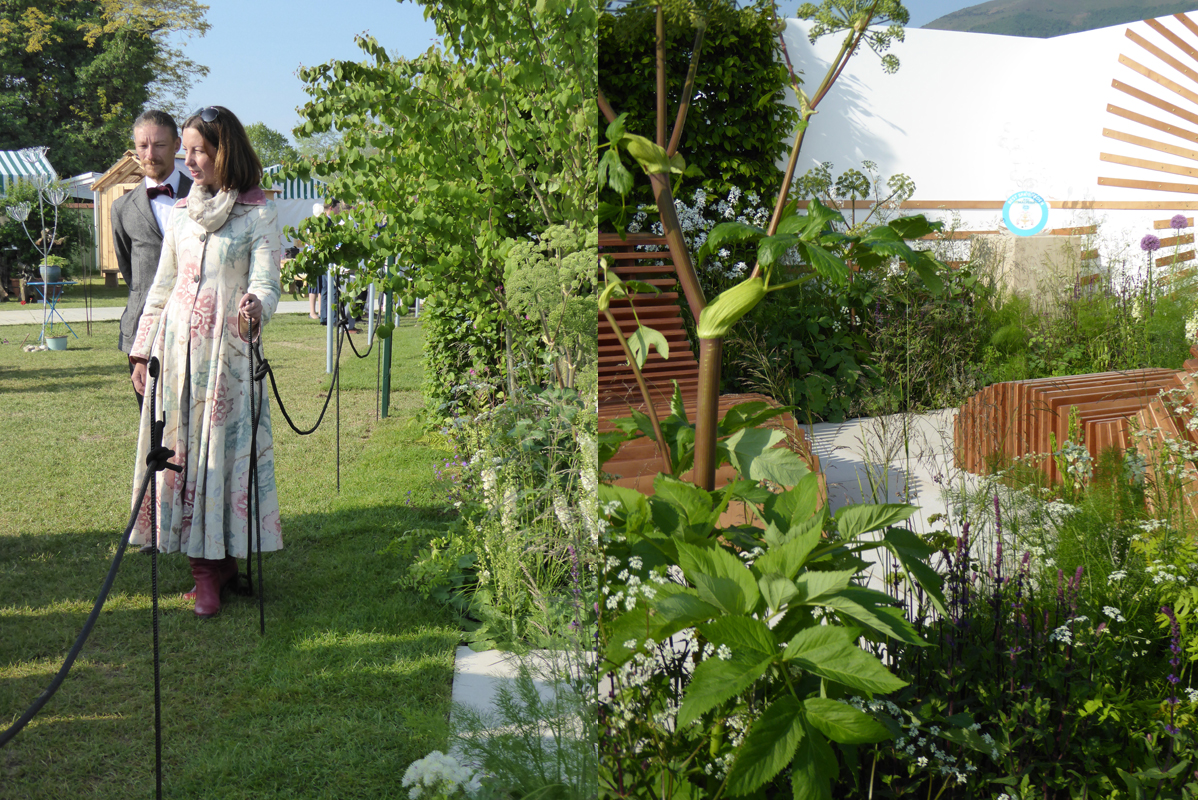 Created by Denis Kalashnikov and Ekaterina Bolotova (left) the ‘Molecular Garden’ was awarded a Gold Medal and the accolade of Best Spa Garden.

One garden, though, is destined to be of a permanent nature – the Health and Well-Being Garden designed by herb grower Jekka McVicar (www.jekkasherbfarmcom).  Filled with aromatic and useful medicinal and culinary herbs, it comprises four raised beds created by Woodblocx (www.woodblocx.co.uk), with a central seating area, where you can relax and take in the beauty of these useful and ornamental plants. Specially commissioned for Pathways, a day service for adults with learning difficulties, the garden will be used by Pathway’s members and by local schools and other educational organisations. 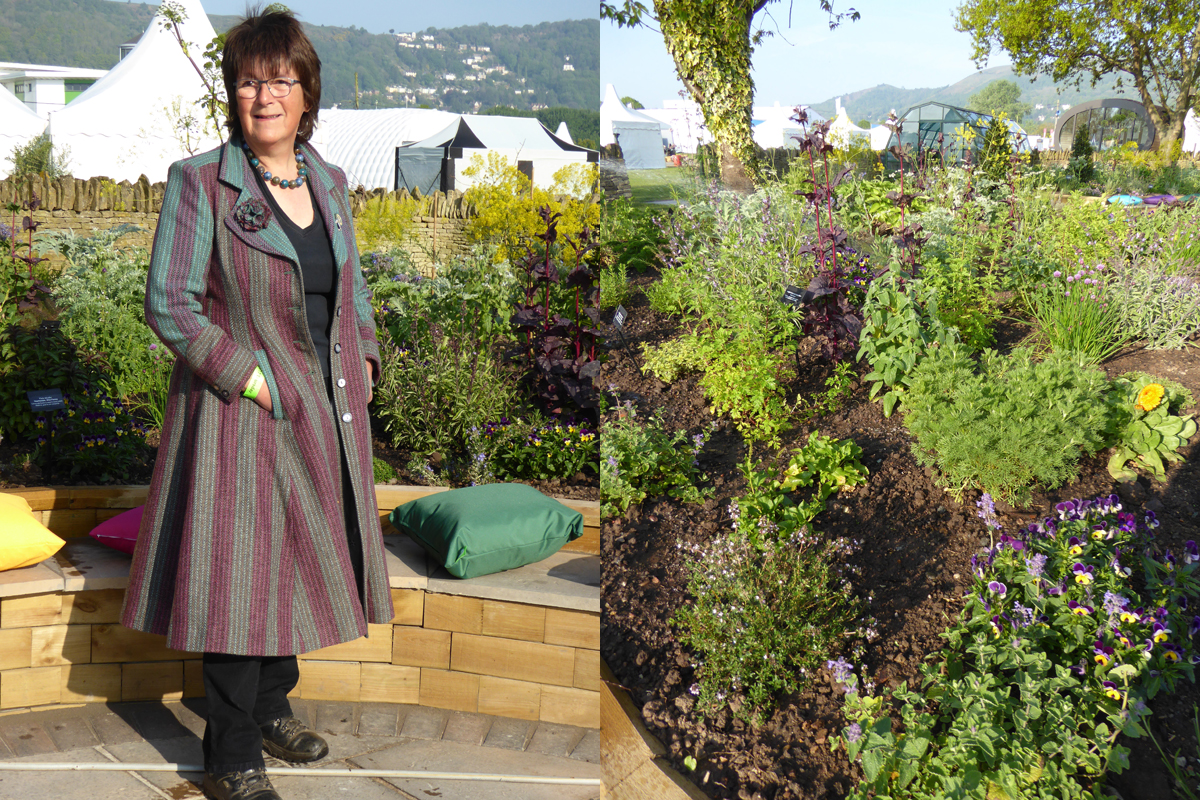 Jekka McVicar, looking resplendent in a coat designed by fellow exhibitor Stephanie Kemp (designerweavingco.co.uk), surveys the permanent herb garden she has created at the showground.

It was great to see artist and illustrator Hannah McVicar (www.hannahmcvicar.co.uk), who has supported her mother’s enterprise at many a show over the years, making her solo debut with a selection of her illustrations and cards. 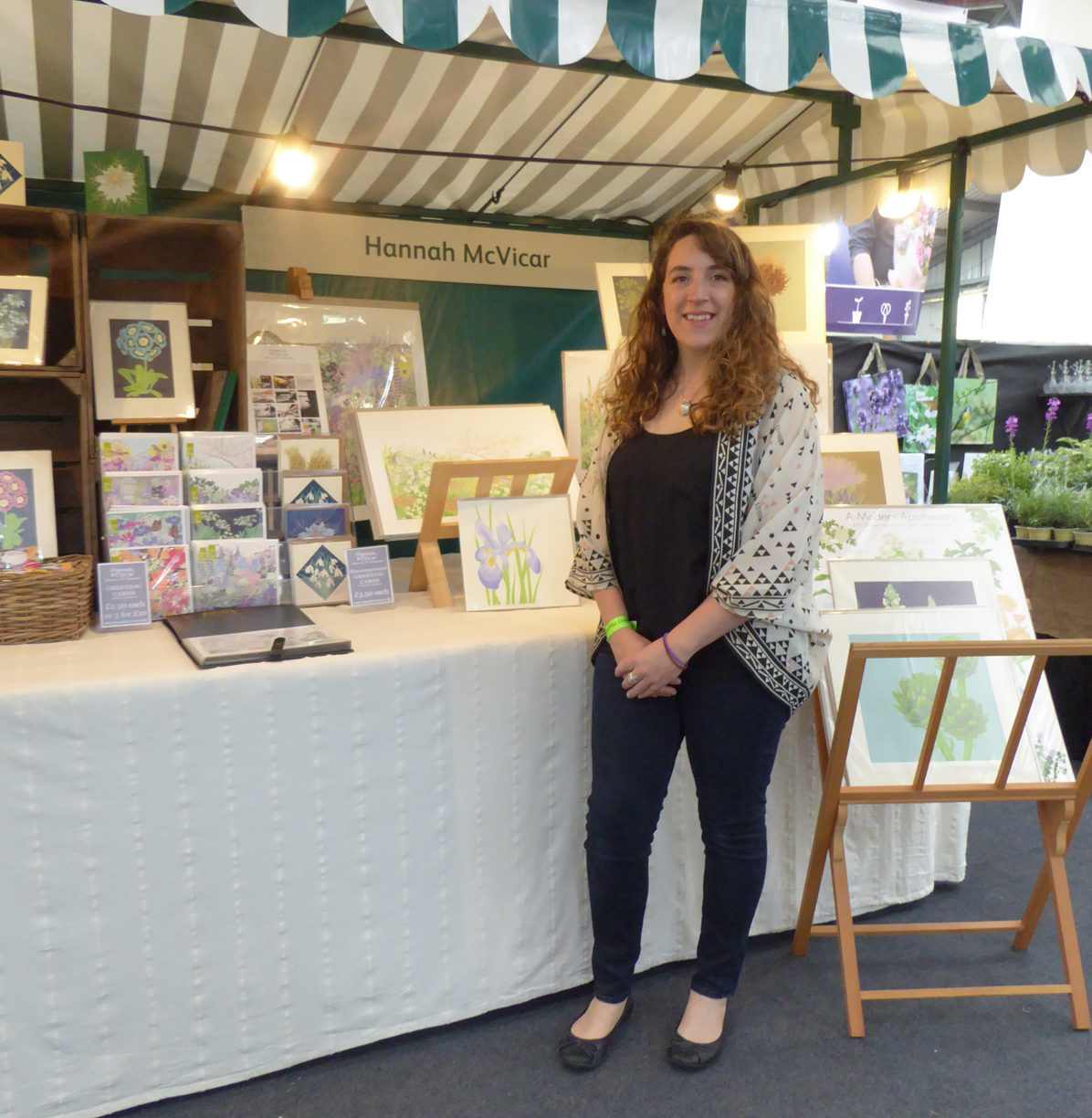 Hannah McVicar launched her solo horticultural exhibition career (she is a regular exhibitor at many other arts venues) at RHS Malvern Spring Festival 2017.

Flowers (British flower growers and Jonathan Moseley’s Floral Fountain), edible plants (Incredible Edible Bristol and its heroine Sarah Venn) and ideas for fencing are among my favourite exhibits and people… and so I leave you with a little gallery of images to whet your appetite for the RHS Malvern Spring Festival in 2018. And did I mention sempervivums? Here are some ideas of innovative containers – some recycled – that will make your sempervivums shine. They are grown by Sue and Ray of Sunray Plants, specialist growers of sempervivums and restios (wonderful grass-like plants from South Africa). Sunray only sell at the major shows, so look out for them in particular at RHS Chatsworth and BBC Gardeners World in June and in September at RHS Tatton Park. They also go to Harrogate twice a year, Harlow Carr, Cardiff and of course, Malvern twice a year. 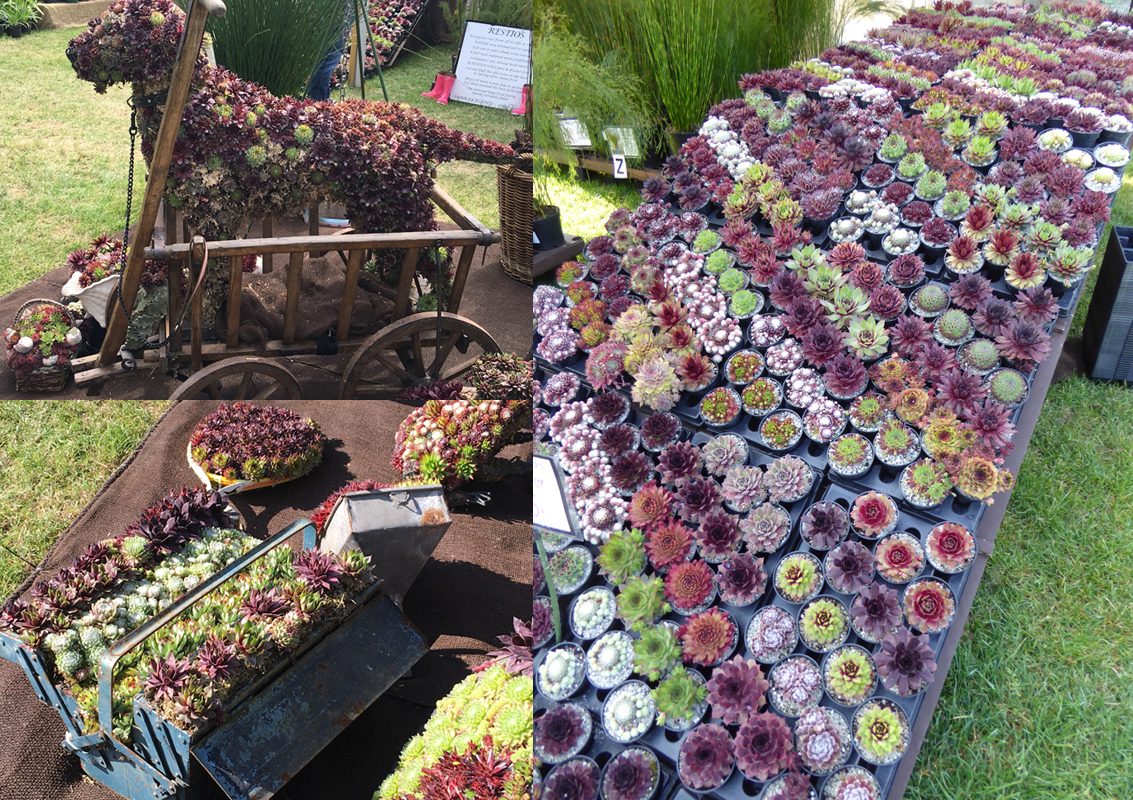 Sempervivum fun and games: buy yourself a river of ‘semps’. 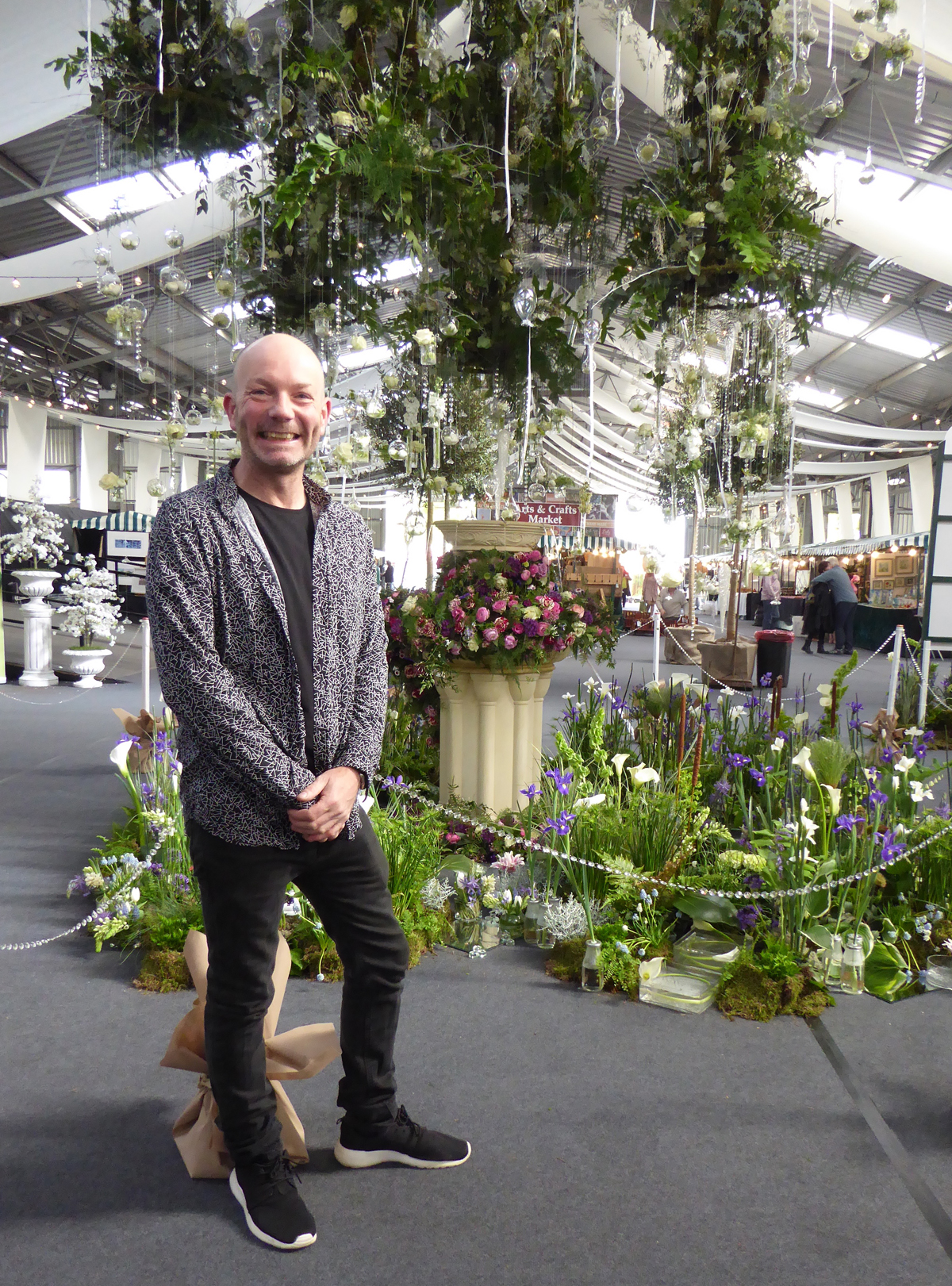 Jonathan Moseley (jonathan-moseley.com) created the Floral Fountain as a centrepiece for one of the main halls at Malvern. 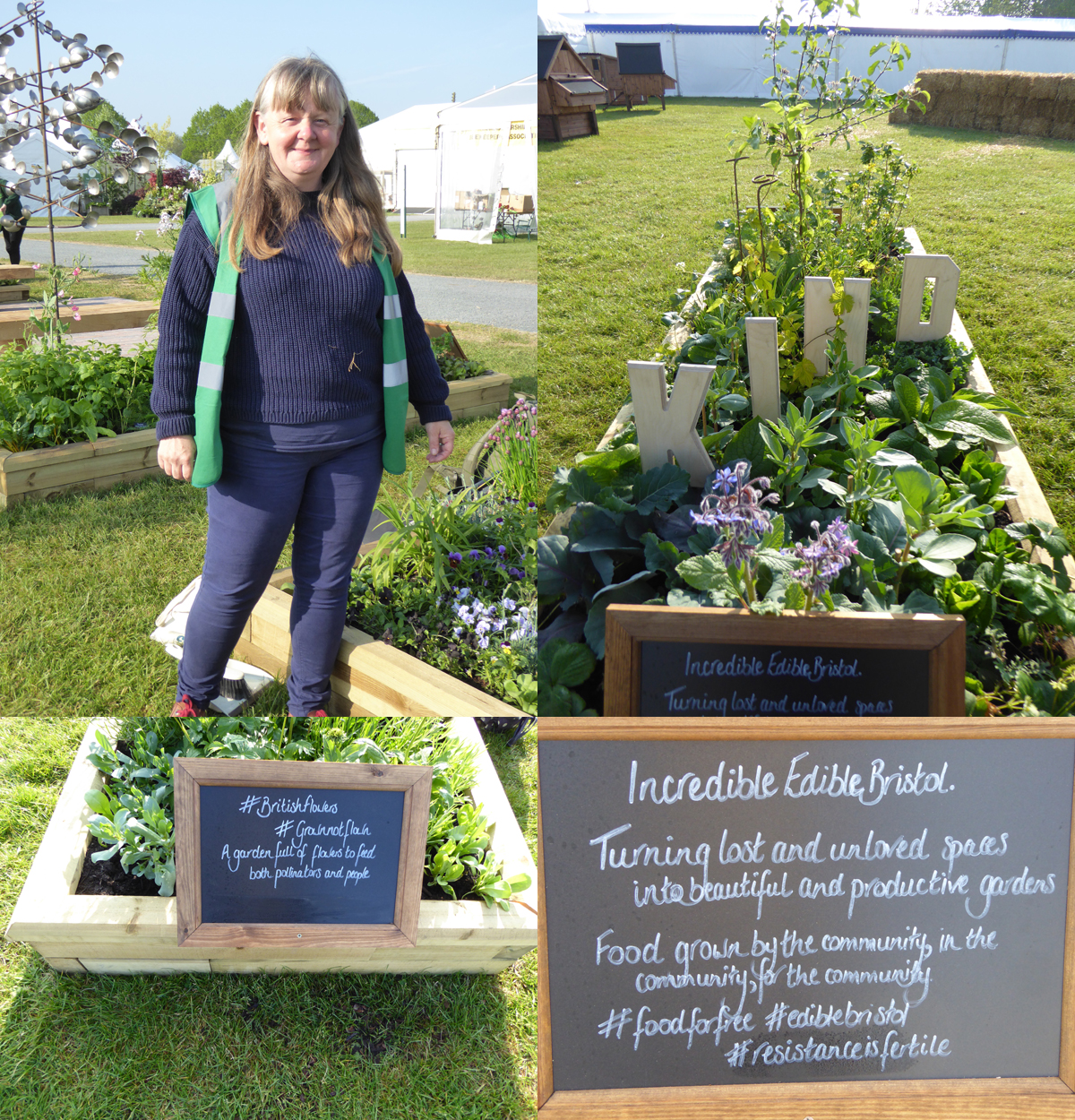 Sarah Venn, powerhouse behind Incredible Edible Bristol (www.ediblebristol.org), brought two raised beds: one giving a flavour of what this community garden initiative does and the other celebrating UK-grown flowers market, Grown not Flown. Her raised beds were among several in the Grow Zone Edible Beds Area curated by RHS Malvern Spring Festival Ambassador Hannah Genders. Among the other organisations represented were a community orchard from Redditch, Garden Organic, farming sisters Amy and Sophie, who have set up a forest school farm on their family farm, and Rush Farm Biodynamic. 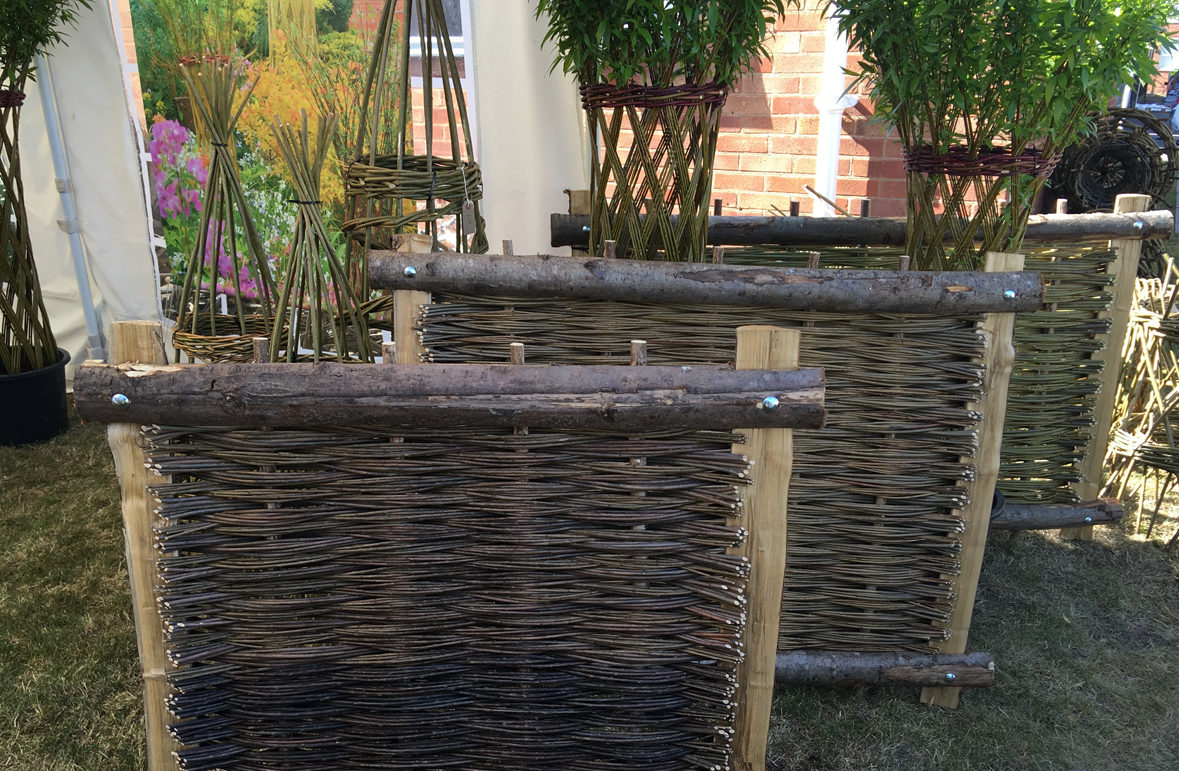 My attention was caught by fencing and boundary items such as the willow panels made by willow grower Jenny Crisp (jennycrisp.co.uk)… 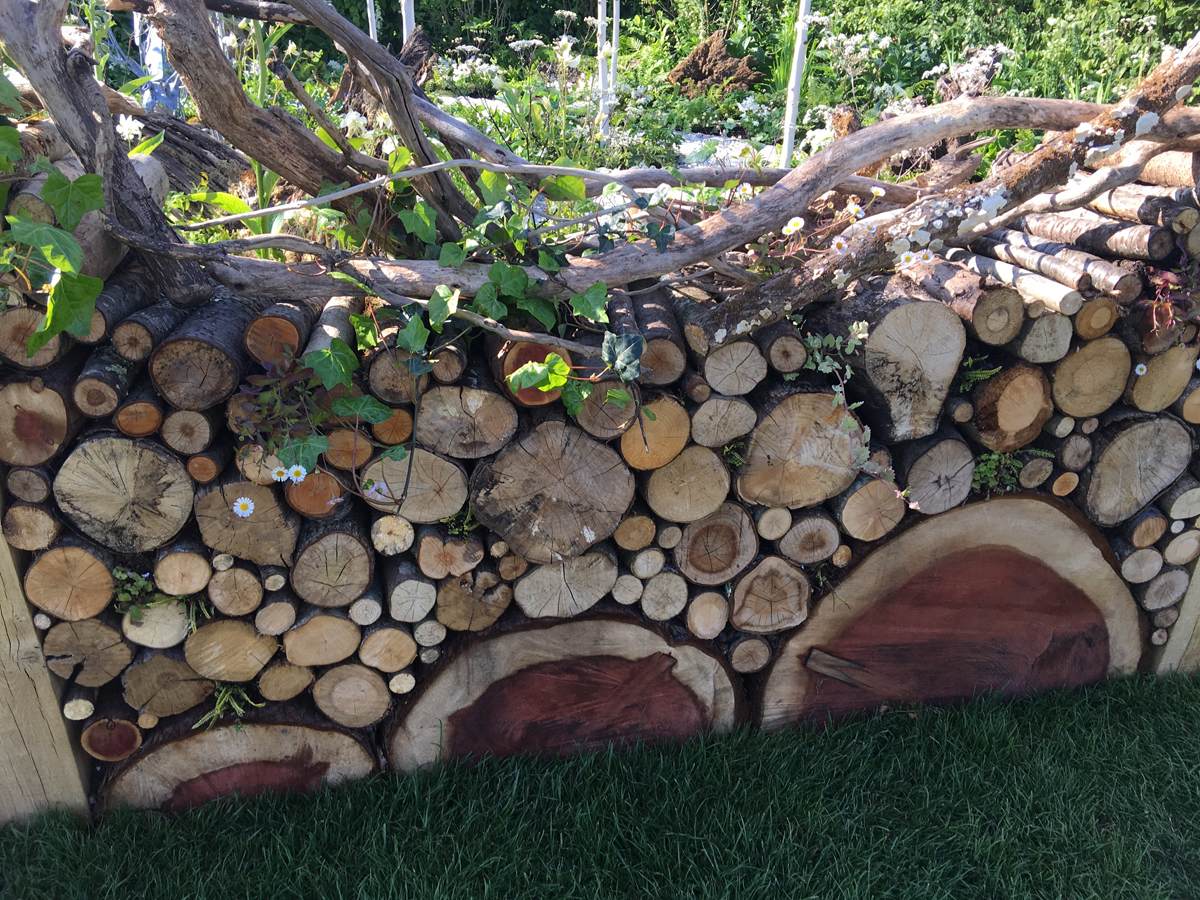 …and the log pattern of the wonderful wooden enclosing structure that surrounded the Buckfast Abbey Millennium Garden (buckfast.org.uk) designed by Maia Hall.

I didn’t see it all by any means… but this seems a good place to leave my notes with the lovely Dahlia ‘Malvern Spring’ which made its debut at Malvern. It was shown by Jon Wheatley, consultant to the National Collection of Dahlias on behalf of its breeder Green Yard Flowers. 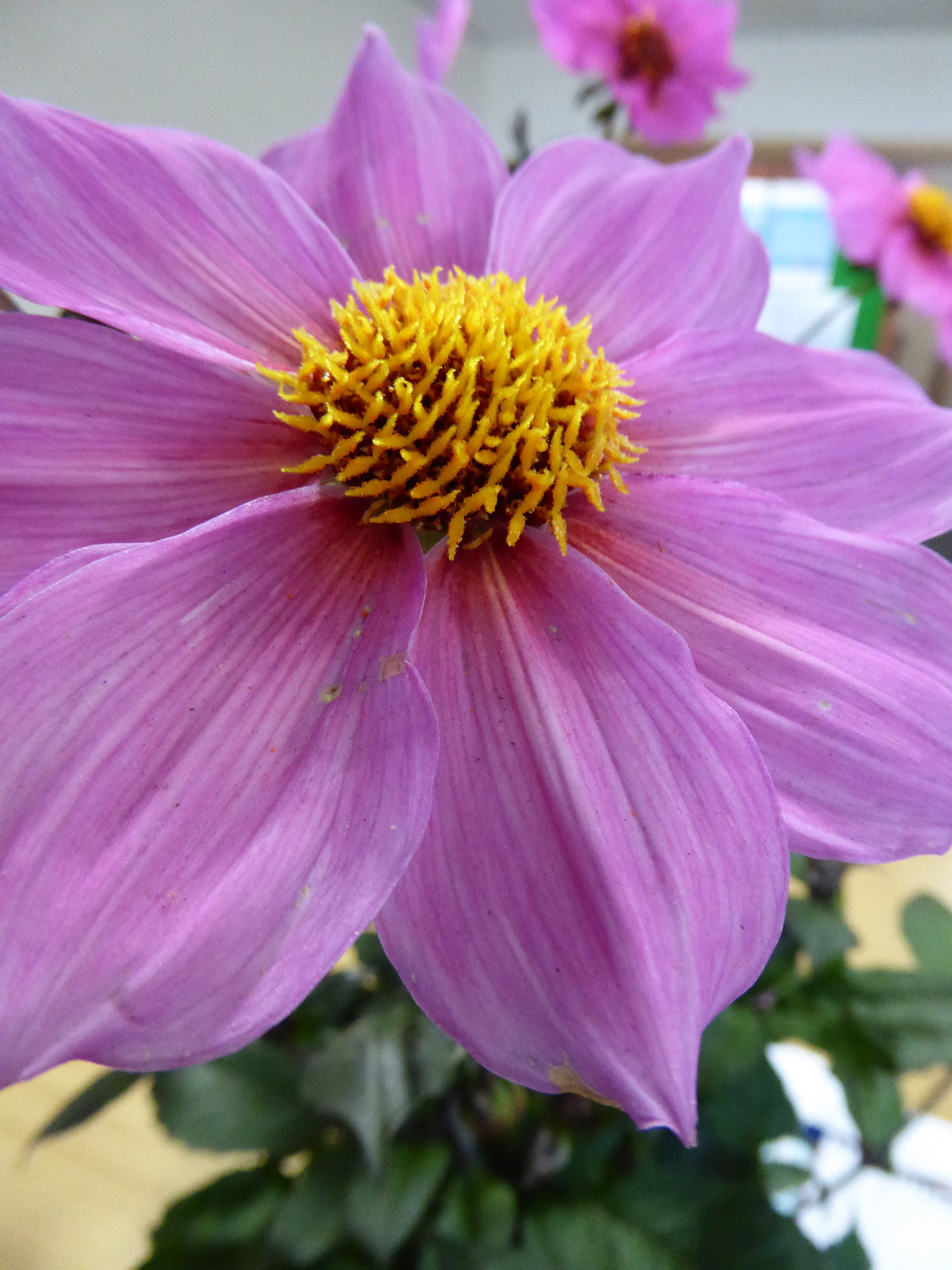 Oh and one more thing: in The Plant Finder Parlour this sign, recreated by Anneliese Appleby (www.annelieseappleby.co.uk), who also created the hand-printed wallpaper decor of the parlour, seems to sum up a certain attitude to life, which I think growers and gardeners have in spades… 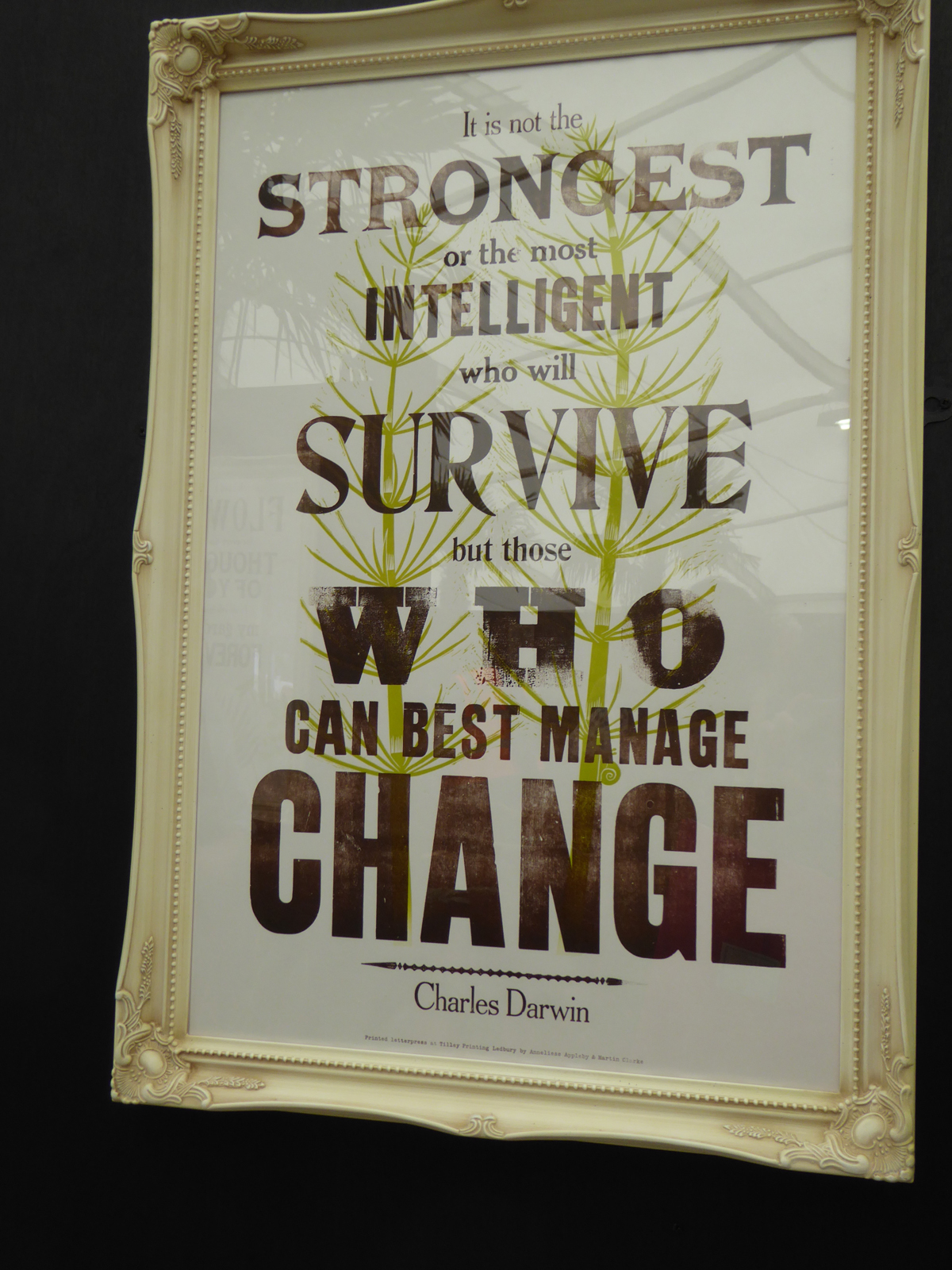