Last year I bought a Szechuan pepper plant at RHS Hampton Court Flower Show from Hooksgreen Herbs. It has grown to about 1 metre plus during the year and has the most monstrous thorns. It is a green-leaved female plant and is generally described as self-fertile. So far no flowers that I have seen. 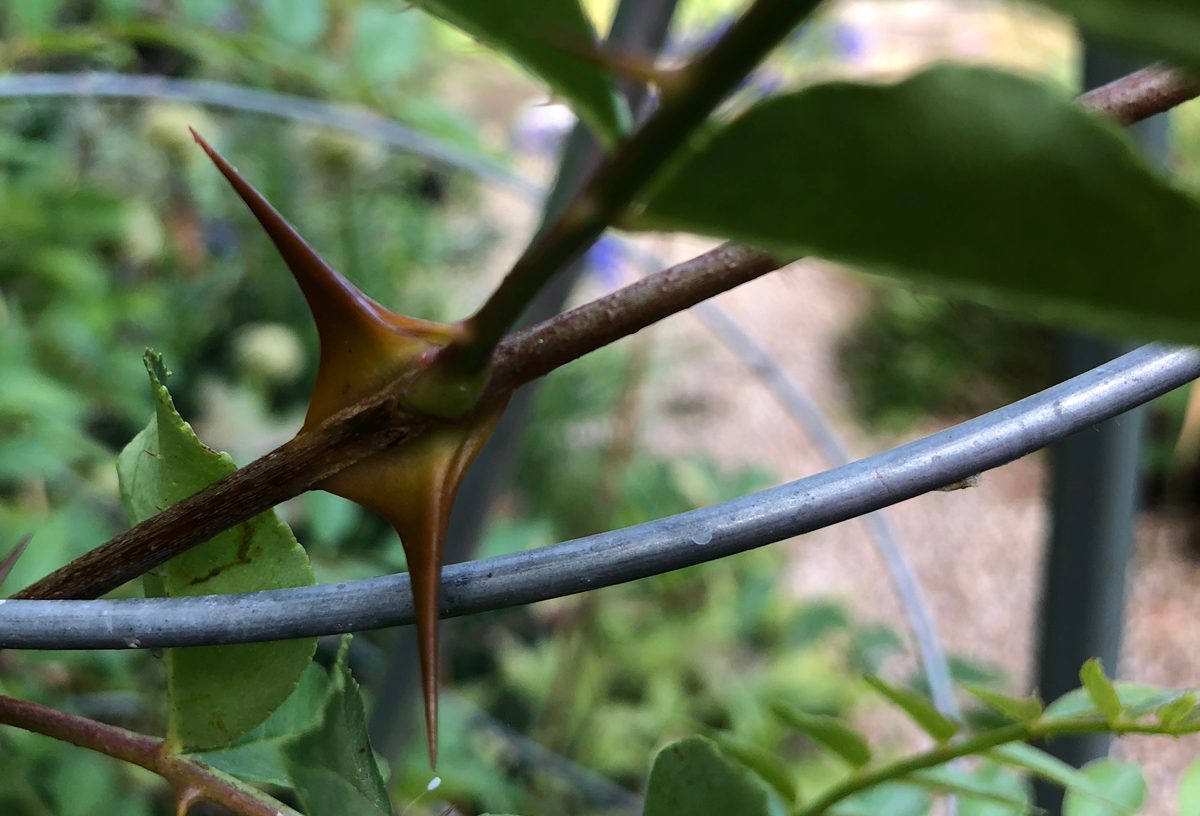 This year at RHS Hampton Court Flower Show I learned from Pennard Plants that the purple-foliage male plant might be useful to ensure that seed would set and ultimately it would produce the peppercorns of its common name. So I acquired an attractive rather small male plant and I am waiting for peppery progeny.

Pennard Plants suggest that the foliage of the green-leaved form can be used to flavour soups and salads, and for making pesto. That is next on my list to try out. I imagine it might be a hot addition to a salad. Both forms are hardy and deciduous and will grow to about 2 metres high. 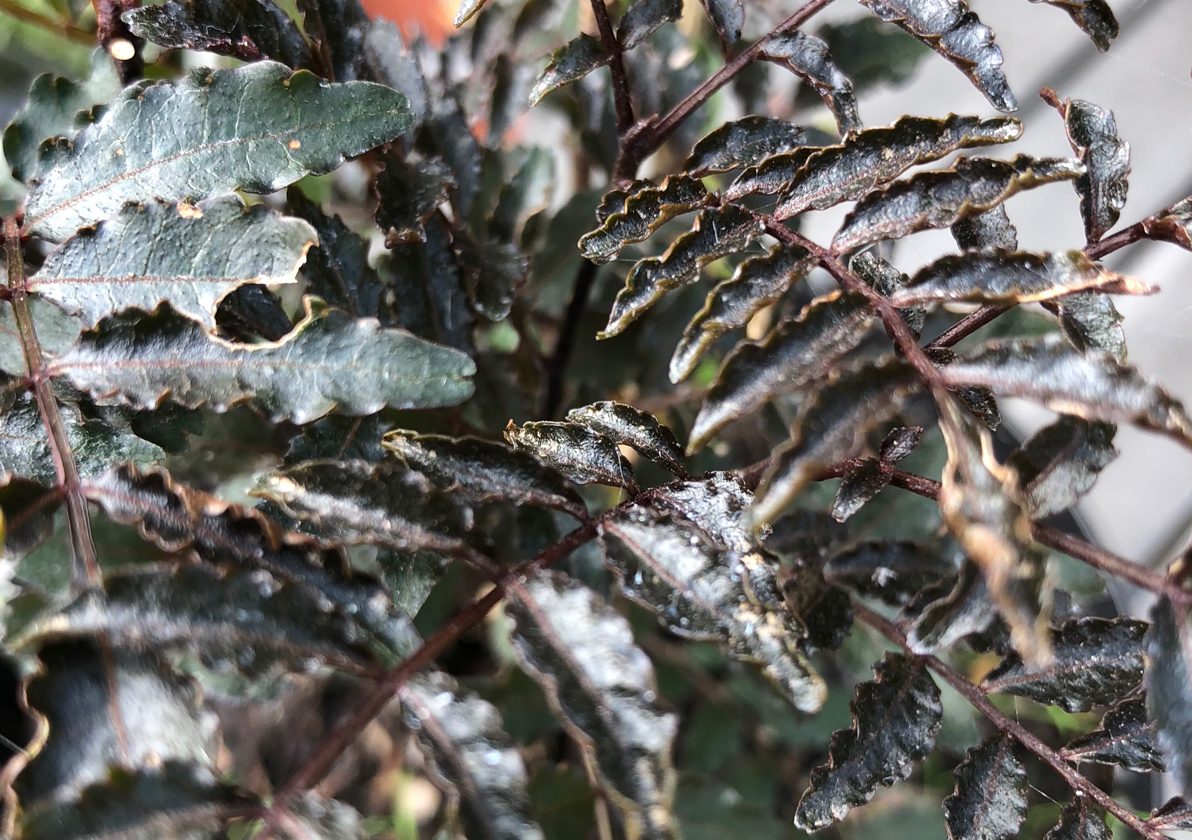 Purple-foliage male plant bought this year: I am hopeful that there will be flowers and seed set next year.

I would like to think that I might one day actually be able to harvest some peppercorns from the female plant, but in the meantime I was fortunate to be able to fulfil all my pepper needs at a Guild of Food Writers Workshop in March this year.

The Workshop was held at Santini Restaurant, Pimlico and was led by Axel Steenberg of Steenbergs and his wife Sophie Steenberg. Axel showed us how to appreciate pepper and peppery berries, pods and seeds, including the mouth-numbing Sichuan Pepper (Zanthoxylum simulans) pepper, before using them in food preparation. 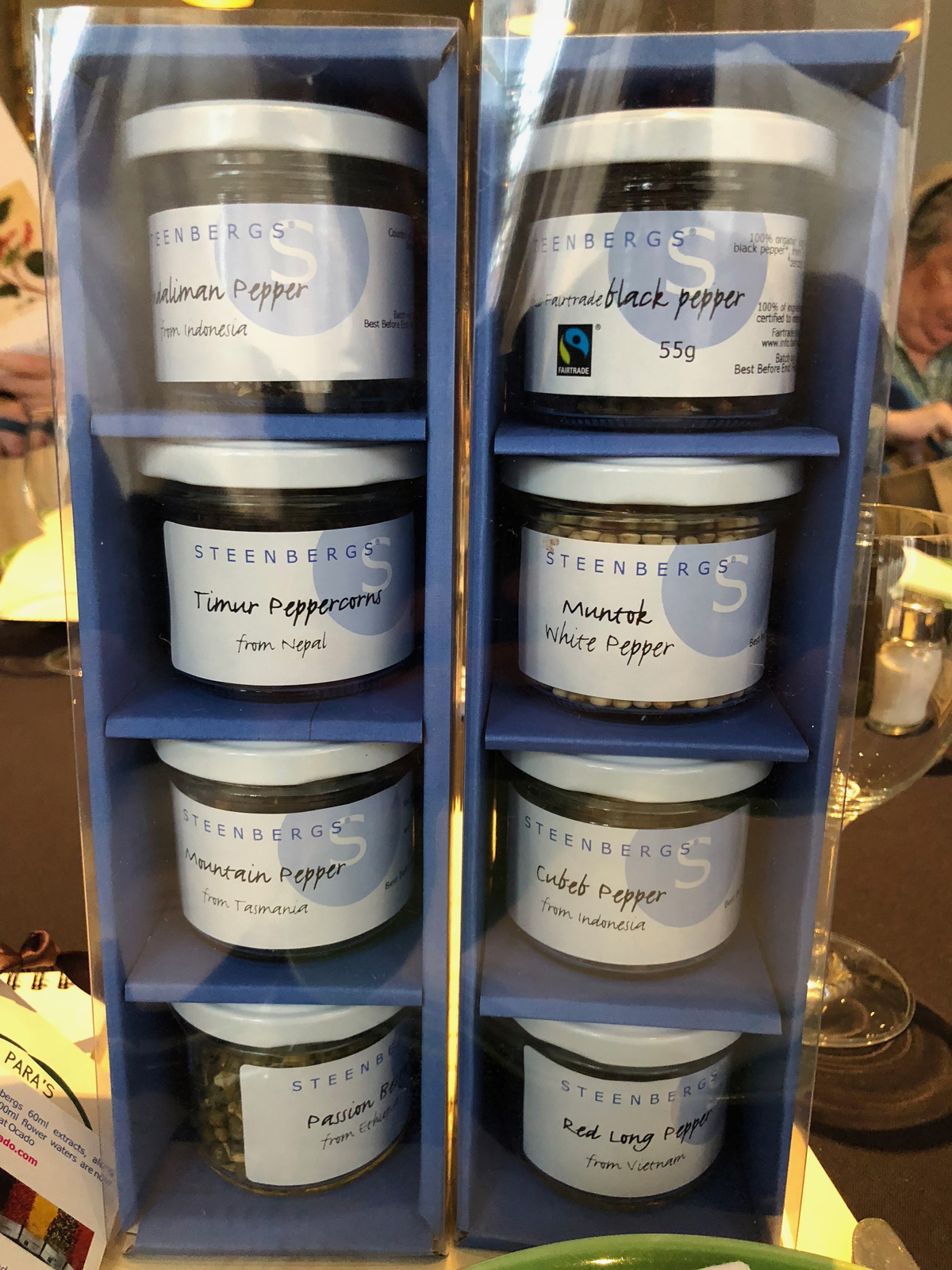 I need a new dedicated pepper shelf to house this new collection of peppers, berries and pods with a range of fiery attributes.

Each workshop participant was offered a ‘library’ of Steenbergs’ pepper and pepper-like material to take home. Around the table samples were handed round for us to sniff, crush, sniff again and taste… 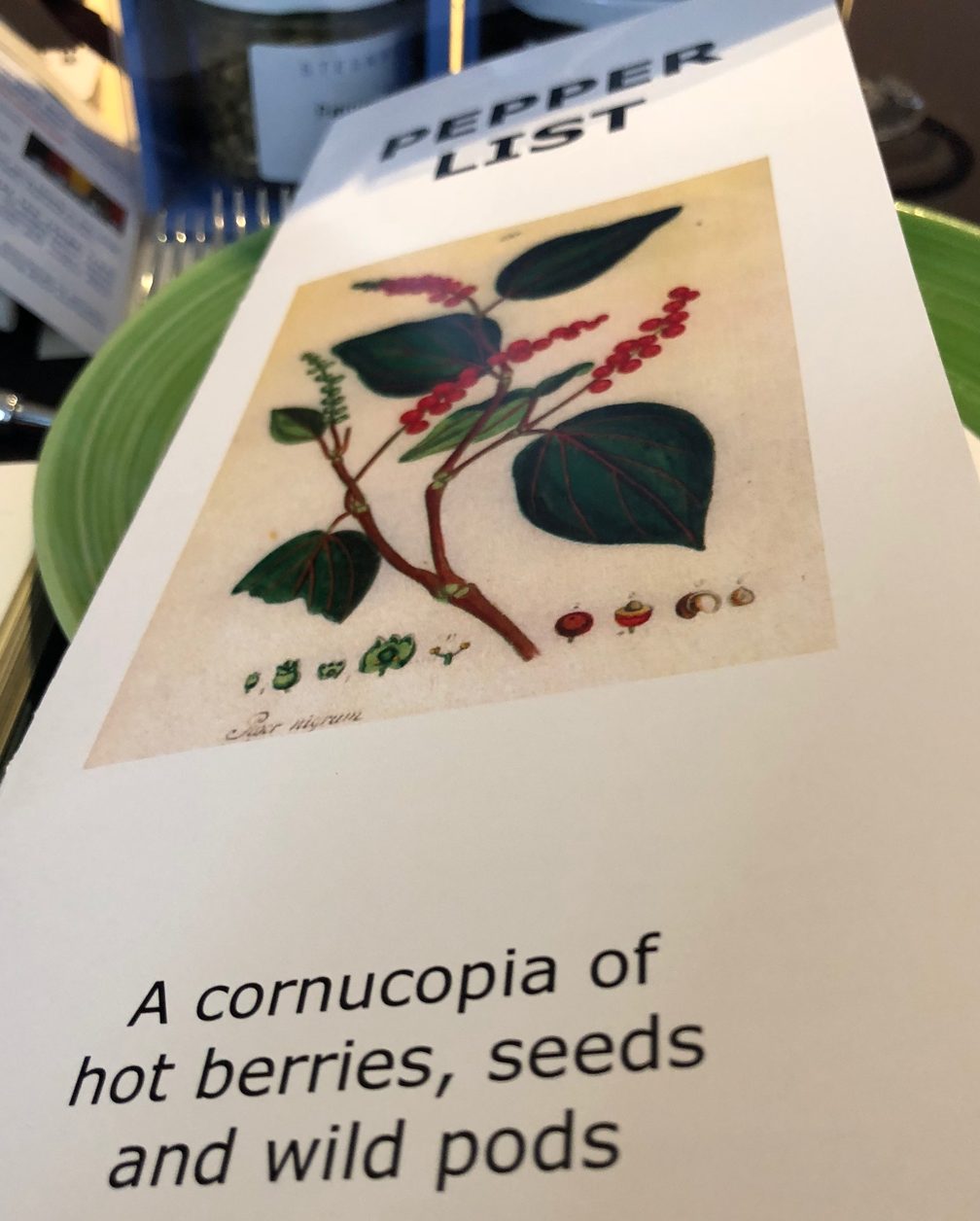 Tasting notes for the pepper workshop: A cornucopia of hot berries, seeds and wild pods.

Most exciting was the paper Pepper List, with descriptive notes under headings of aroma, flavour, food pairing and origin. I just have to open this spicy little booklet now and am transported on a journey alongside a trader/explorer belonging to the Dutch East India Company of the 17th and 19th centuries as they voyaged in search of spices. In fact, I would be a few centuries out, since culinary use of pepper has its origins some 9,000 years ago, when peppercorns were likely to be harvested from the wild, rather than cultivated.

Pepper or peppery-like berries, seeds and wild pods come in a range of colours depending on when harvested and how dried and processed. They originate from many parts of the world and Axel explained how they could be used to add spice and heat to dishes, as well as a counter-intuitive fruity and floral sweetness. 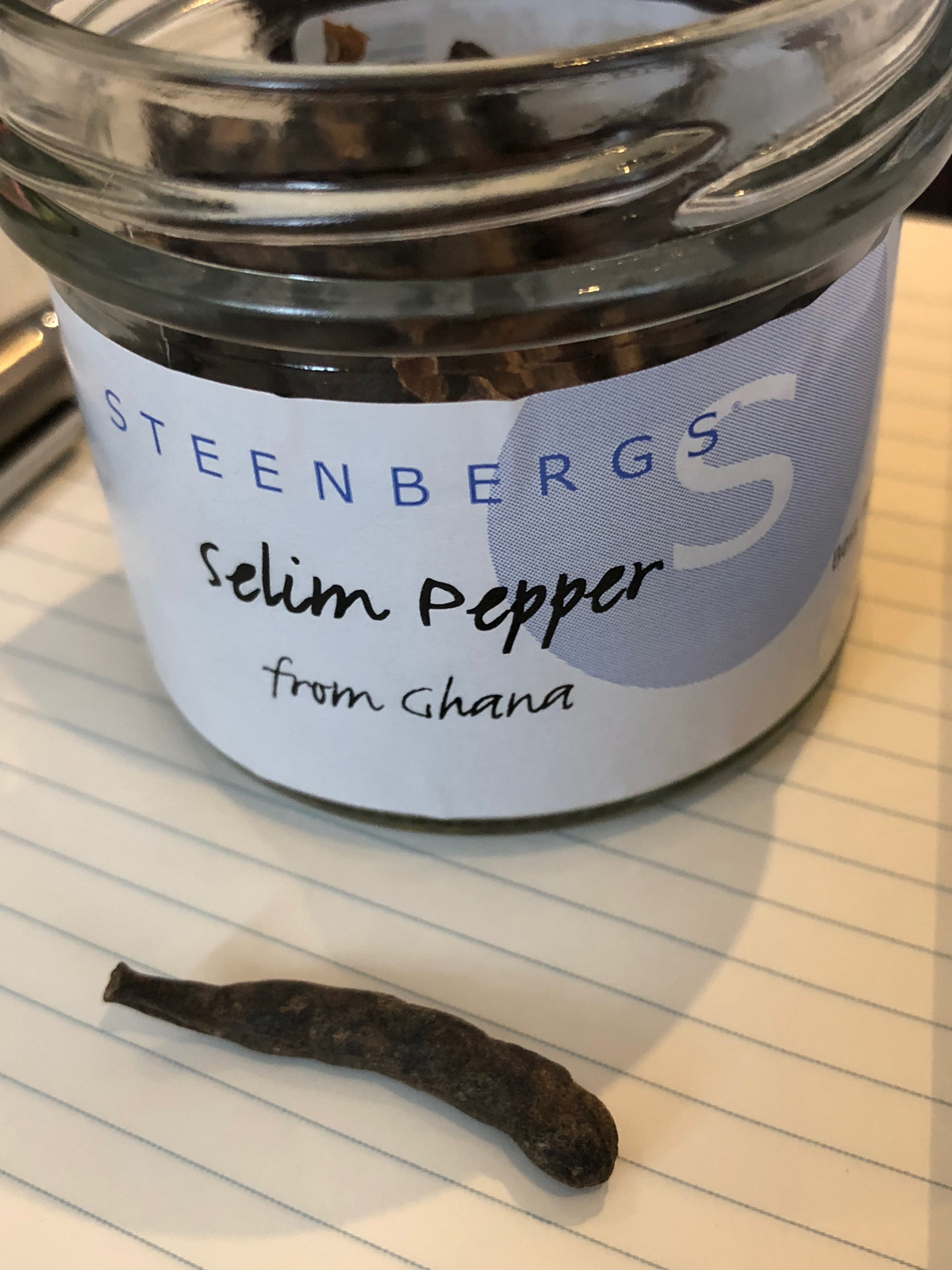 Axel Steenberg asked us to note our first impressions of the colour and shape, then the aroma of each sample whole and crushed.

Then thanks to Laura Santini and her creative kitchen at Santini Restaurant we sampled a menu that featured seven of the peppers we took home in the iconic Steenbergs glass jars. Salted cod with white polenta was paired with Andaliman Pepper (Zanthoxylum acanthopodium): Pasta e Fagioli was transformed from a ‘safe and cuddly’ dish into something that grabbed you by the scruff of your neck and made you sit up straight – that something being Red Long Pepper (Piper longum) from Cambodia. In the tasting notes this was described as “Starts freshly-cut wood with fruity cacao notes, followed by an intense and fiery end”. 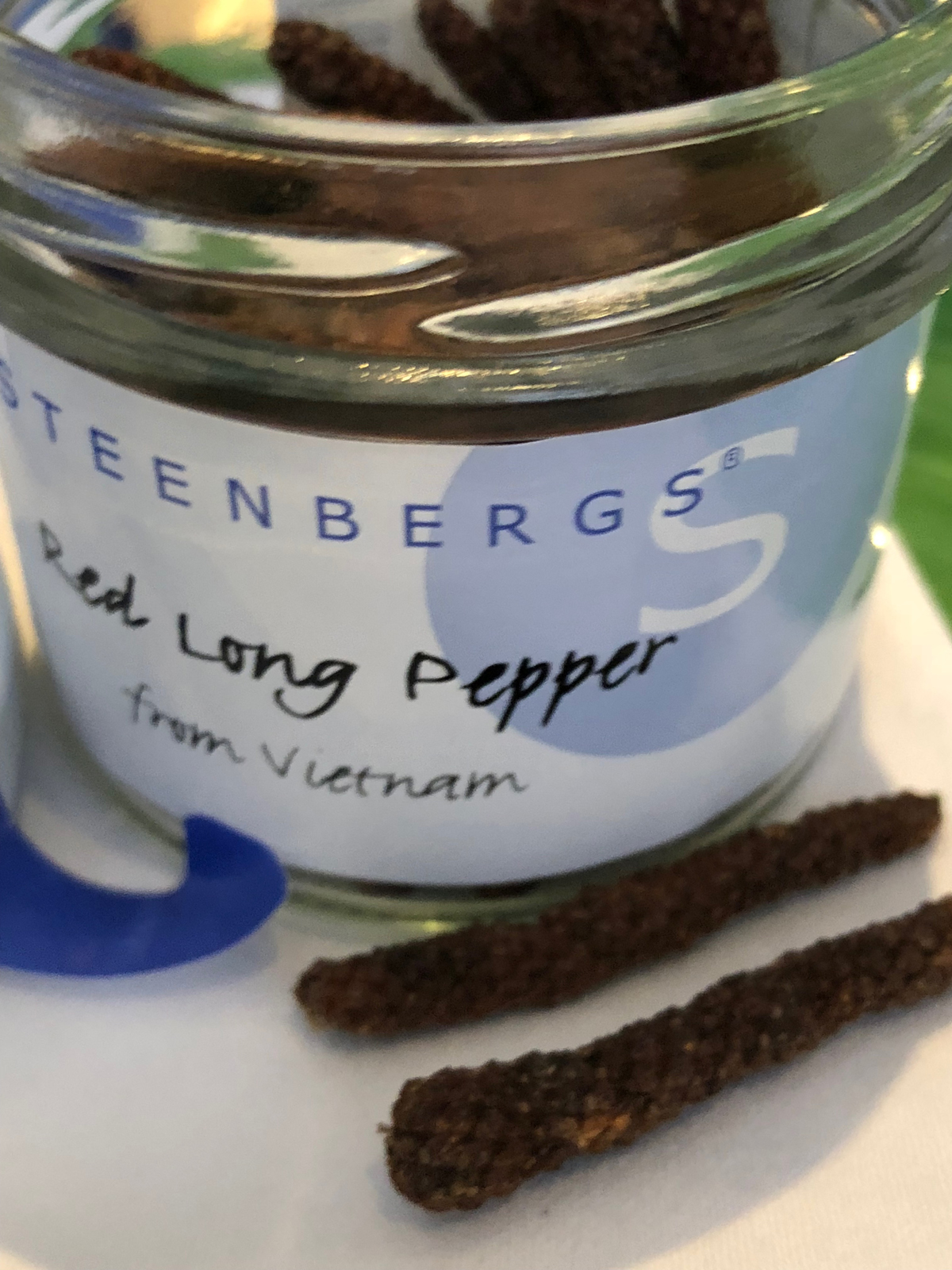 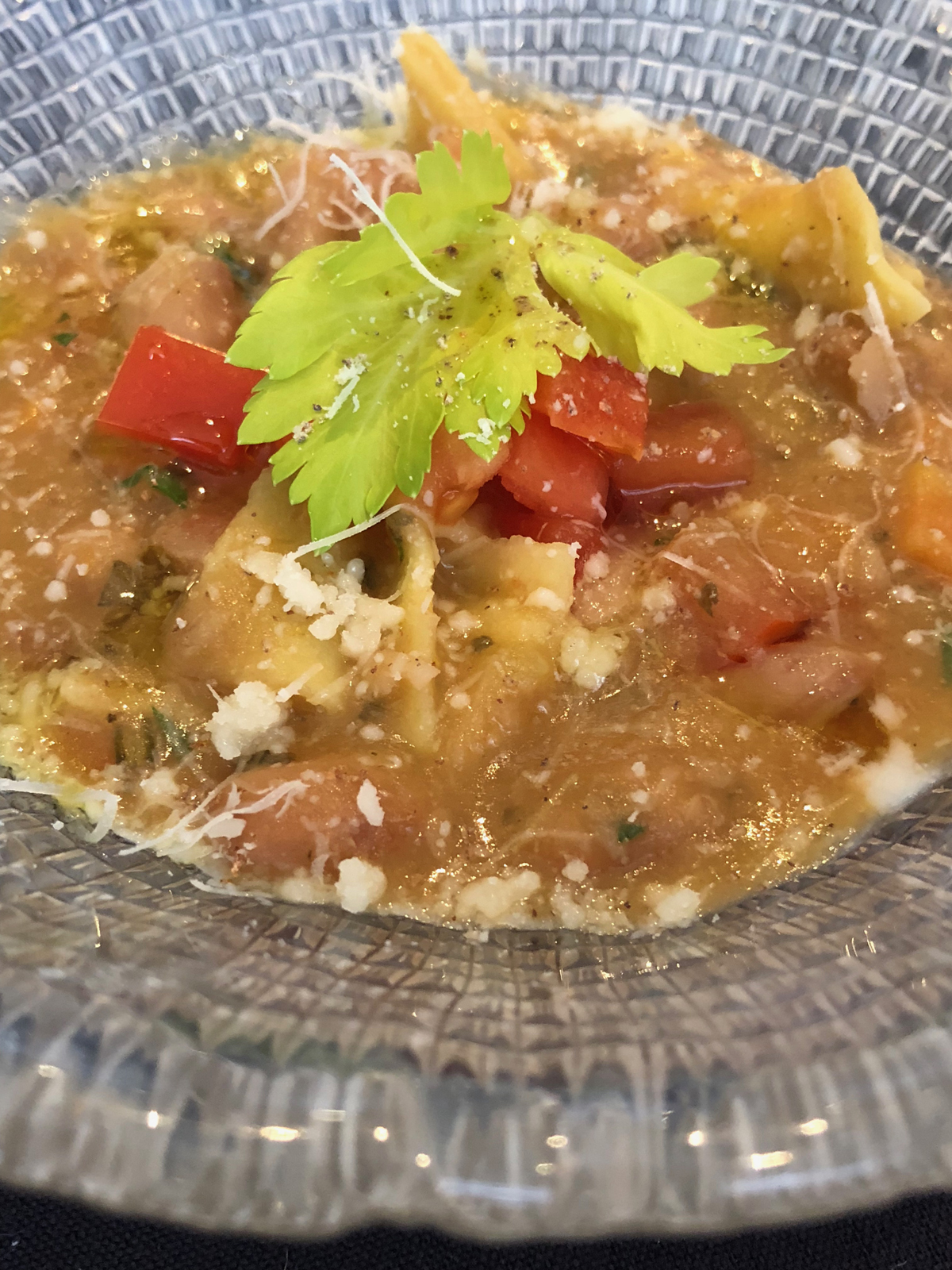 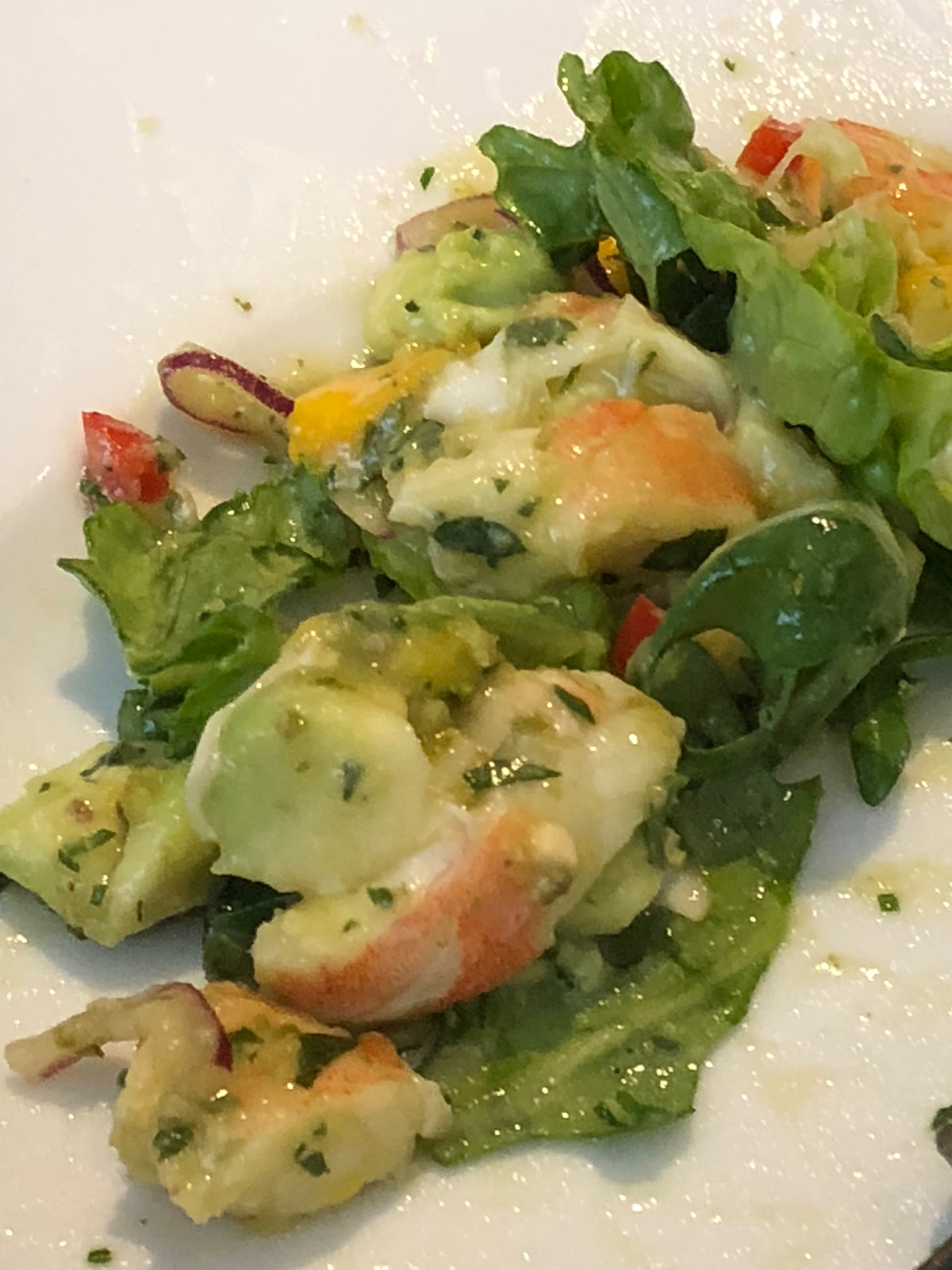 Mango and Prawn Cocktail with Passion Berry pepper from Ethiopia. 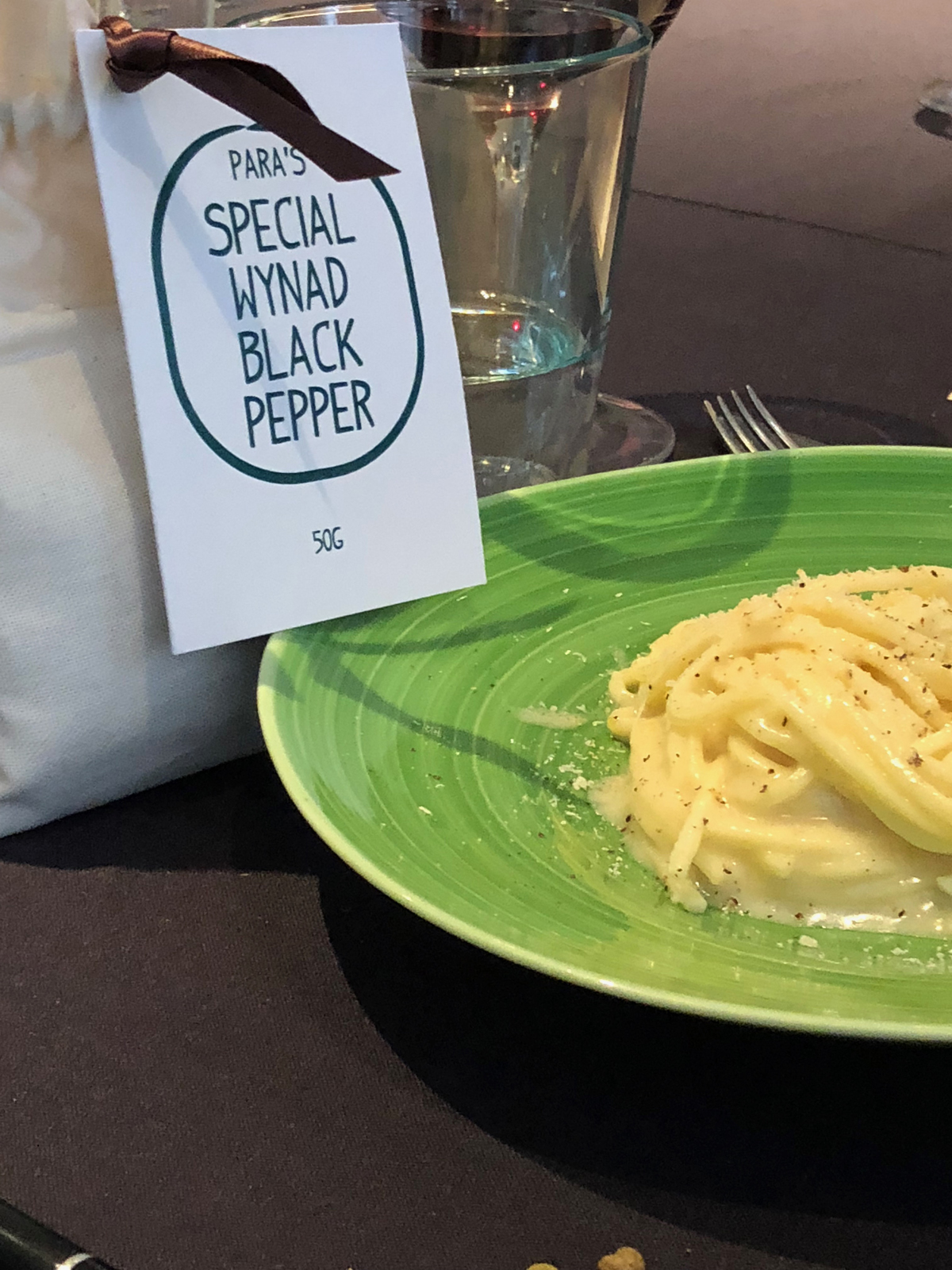 Mango Prawn Cocktail with Passion Berry pepper (Ruta chalepensis) from Ethiopia was the next offering. The emphasis here was fruity and other suggestions included using it with cooked fish, asparagus and desserts. For the pepper in a classic Cacio e Pepe Laura used Para’s Wynad Black pepper, a Single Estate Black pepper from a small family-owned estate in southern India.

Axel told us that most peppercorns are harvested from January to March, then dried in the sun for standard black peppercorns. Some are left to ripen further and the Para’s Special Wynad is from this later ripening portion. We could see that it was a slightly red colour and when crushed it has a fruity, warm flavour. It certainly gave a traditional pasta dish a zingy new lease of life. 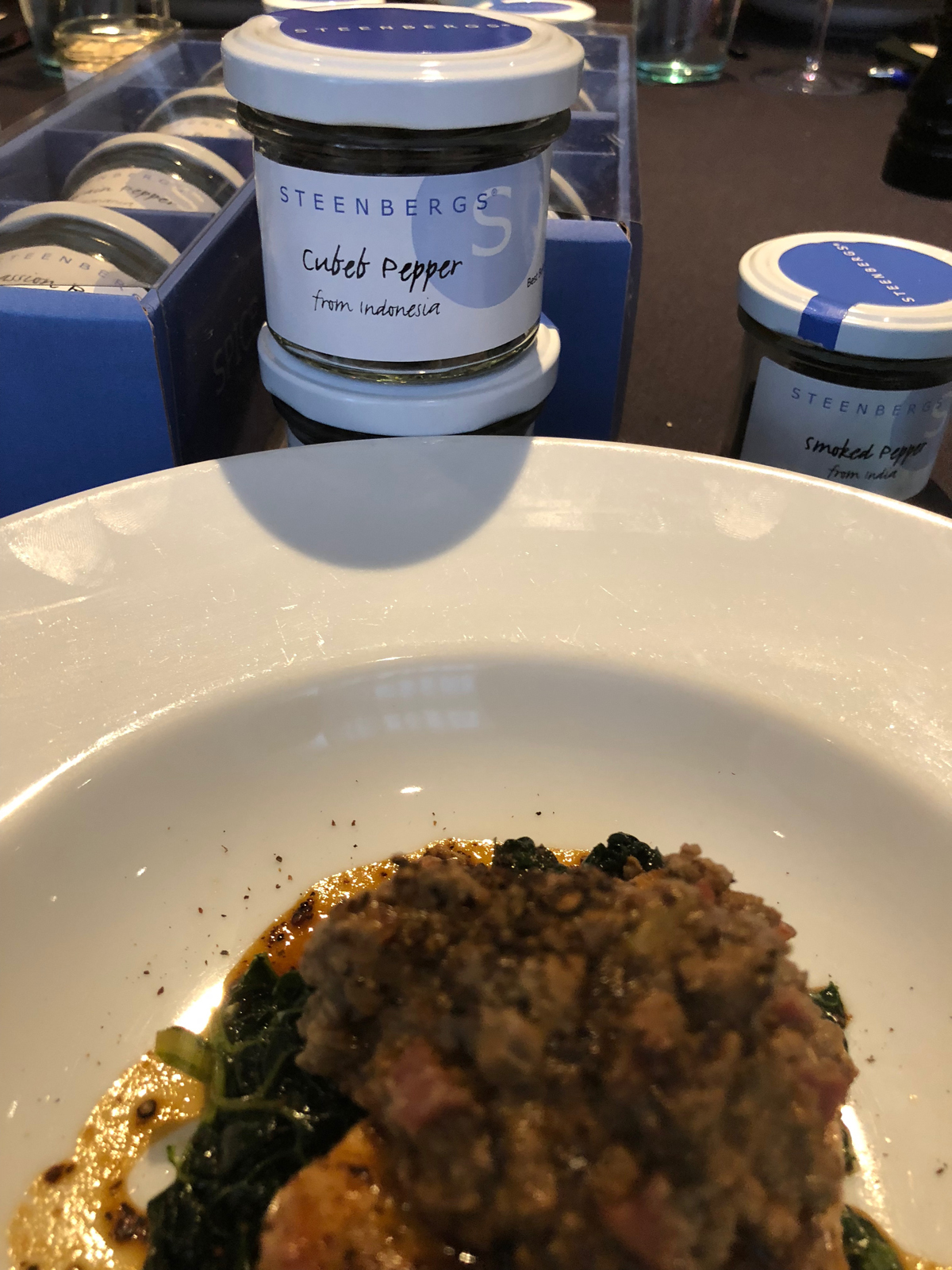 Cubeb pepper was paired with a guinea fowl served with Cavolo Nero, a dark kale.

Next up was a guinea fowl served with Cavolo Nero and its pepper partner was Cubeb Pepper (Piper cubeba) from Indonesia. It is described as having a fresh pepper and spice aroma, which when cooked offers a sweet woodiness and hints of smoked black tea. It suits tagines or stewed dishes and is also good in chocolaty mousses and fruit compotes. 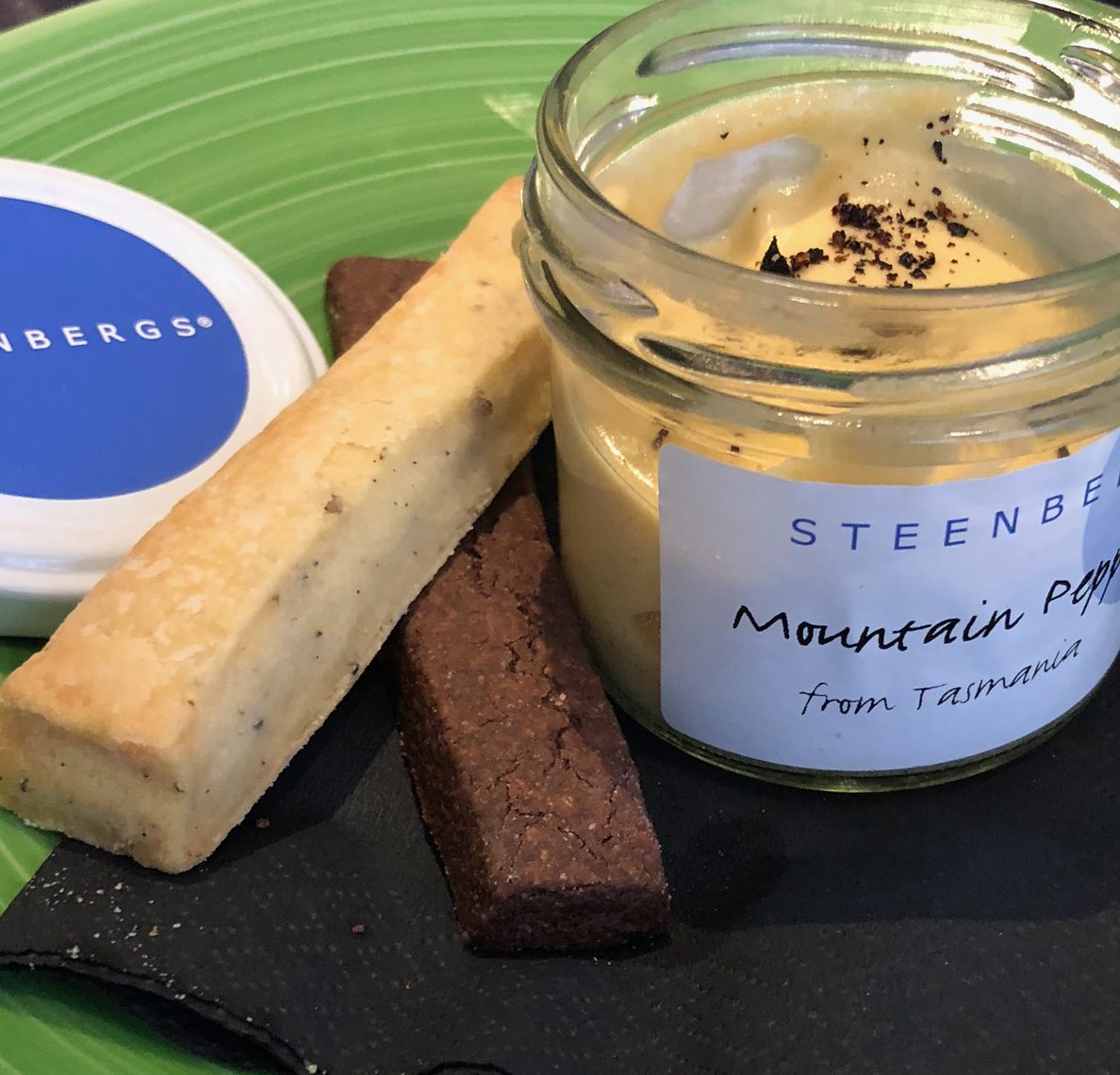 Tasmanian Mountain Pepper added a zesty note to the Zabaglione served in a Steenbergs jar with cookies spiced with Timur Pepper.

I have long used pepper with strawberries and other berried fruits but the delightful Zabaglione created for us with Tasmanian Mountain Pepper (Tasmannia lanceolata) and served with cookies spiced with Timur Pepper (Zanthoxylum armatum) from Nepal, was a treat beyond expectation. Both these peppers and the Andaliman Pepper from Indonesia offer what Axel describes as tingling sensations of pins and needles and can pretty much numb your tongue and mouth when sampled uncooked.

As a result of the workshop I now have a dedicated pepper shelf and have purchased an additional grinder for small quantities of pepper in my pepper pairing experiments. And I will continue to wait hopefully for years to come, I should think, for that home pepper harvest from my Szechuan Pepper (Zanthoxylum piperitum) plants.

I will be experimenting during the summer and hope to have mouth-numbing, peppery reports to make in due course.

Previous Post: « On my bookshelf: The Illustrated College Herbal and A Taste of Herbs
Next Post: Staying home, thinking and sorting »