I work in a room that overlooks two car parks: that of my local supermarket and the most wonderful stationery shop. Once a bedroom, this room is now my work space, my ‘office’. Luckily the wallpaper the previous owners chose is coincidentally appropriate to my garden life, but as you would expect it is now more or less covered by sturdy bookshelves that hold my garden library. 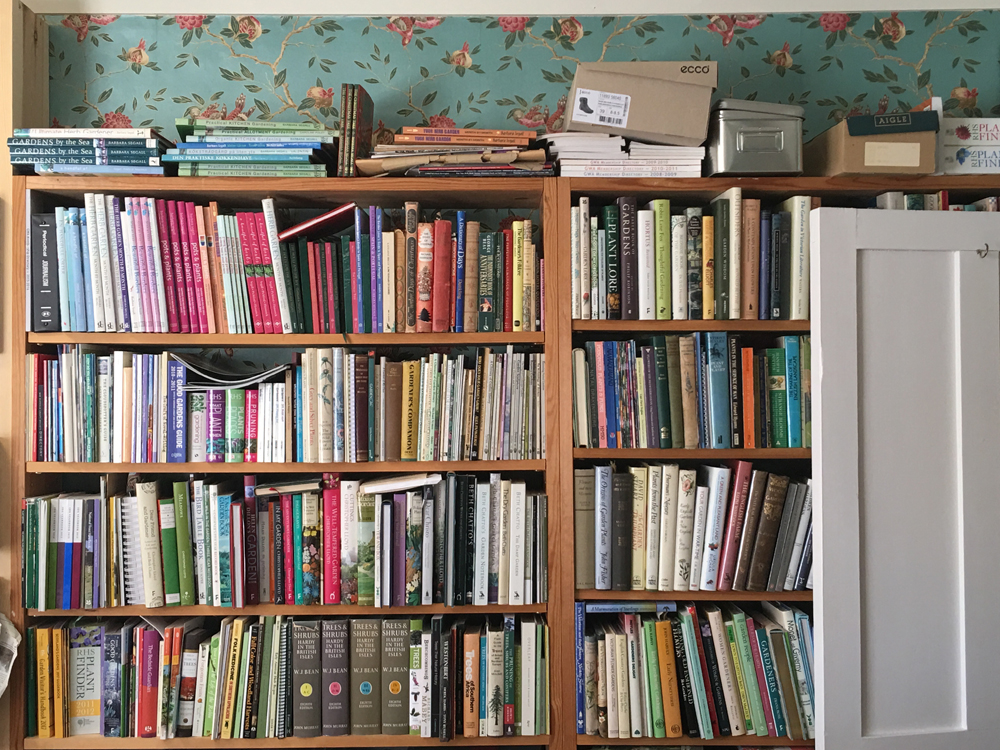 Pomegranates and peonies, with a pair of exotic birds, are the motifs on the wallpaper of my office, now almost covered by books.

This is the first of a series of occasional blogs about recently published books, as well as those I just wouldn’t be without. The two books on my bookshelf this time are by two of my personal garden champions, Joy Larkcom and Roy Lancaster. Their plant lives have taken them on different pathways but both have provided inspiration to horticulturists and gardeners alike.

The Salad Garden by Joy Larkcom 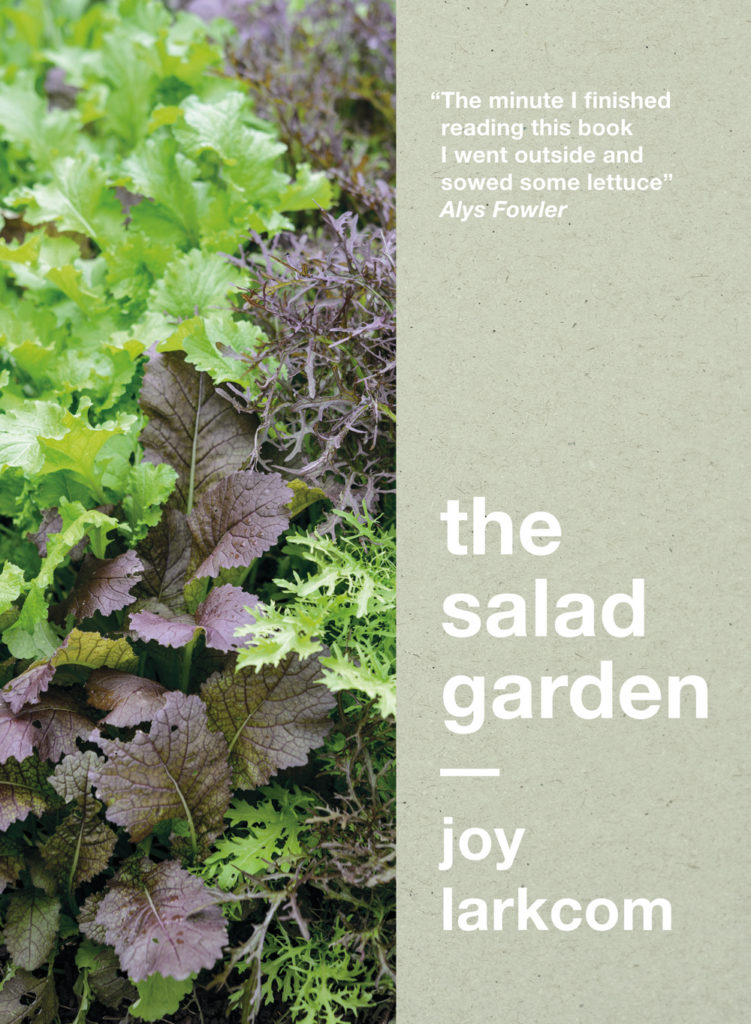 Joy Larkcom’s revised version of ‘The Salad Garden’ is due for publication in May 2016, has been revised and features latest developments in growing techniques.

The Salad Garden, published in 1984, with a mix of colourful illustrations and wonderful identification photographs by Roger Phillips, was the book I turned to for regular inspiration on my London allotment and later in my first garden in Suffolk. 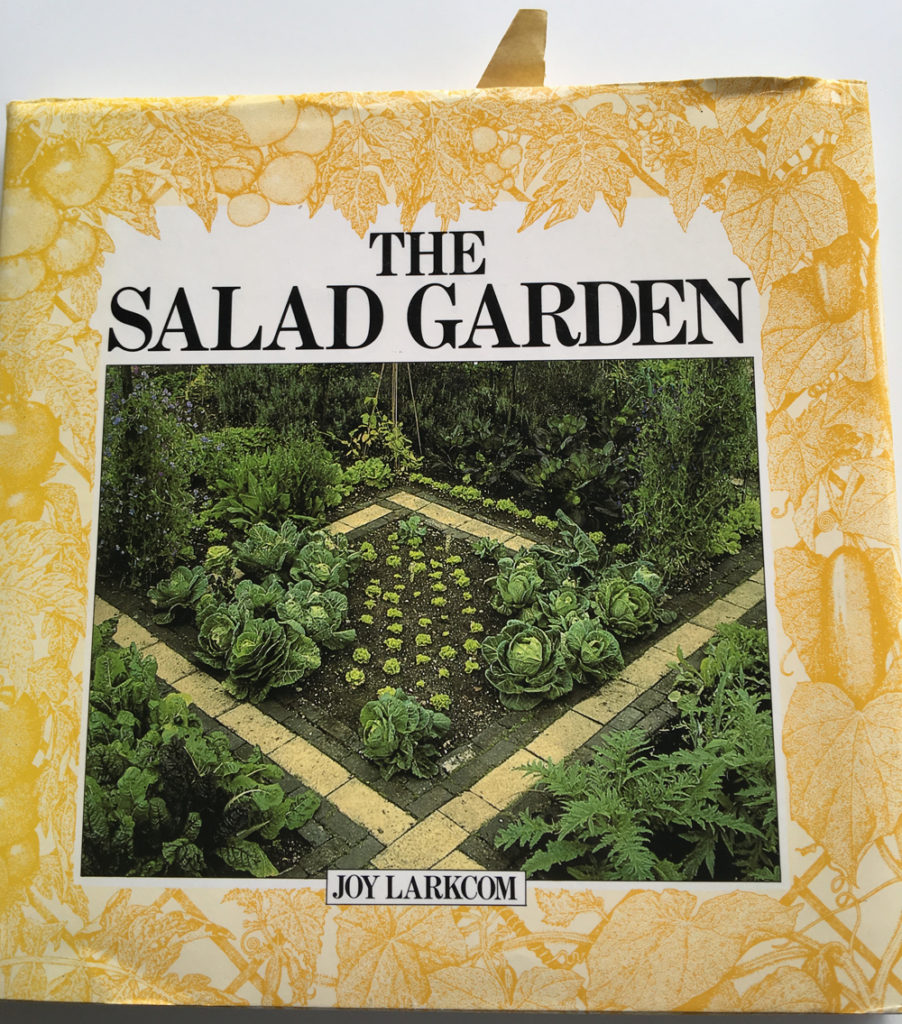 The first edition of ‘The Salad Garden’ was published in 1984.

As it turned out in the 1980s and 1990s Joy Larkcom was a near-ish neighbour in Suffolk. I took to her space-saving sowing and growing methods and it was from her that I first learned about cut-and-come again growing and harvesting of the most colourful and varied salad leaves.

It seems I wasn’t the only one to be inspired: many innovative chefs, gardeners and the professional growers who supplied restaurants and supermarkets, were bowled over by the book and its depth of research and information. To cap it all, in a millennium BBC Food Programme, Michael Michaud (cookery writer, grower of sensational chillies and other vegetables, and co-owner of Seaspring Seeds), nominated The Salad Garden as his ‘book of the century’.

Many of the salads and the techniques for growing them were discovered by Joy when she and her husband Don took off with their children on a year-long ‘Grand Vegetable Tour’ of Europe in the late 1970s. Joy’s delightful memoir of this trip and the many others she undertook in her quest for vegetables of all shapes and sizes, is Just Vegetating (£18.99, Frances Lincoln, ISBN 978 0 71122 935 8).

In 2002 Joy and Don ‘retired’ to County Cork in south-west Ireland. Of course a new salad garden was involved and Joy and Don have continued to experiment and grow wonderful fruit, vegetables and herbs. Retired? I’d say the answer is that most retired people I know are also the busiest… so, no is the answer!

And in Joy’s case, this has meant, in 2016 in her eighties, working on a revised edition of The Salad Garden. In the three decades since its first publication the pace of life in and out of the garden has quickened, and more and more people are growing salads, but in smaller spaces, such as patios, window boxes, containers and small raised beds.

There are new and improved varieties of salad crops as well as many other new crops, such as cucamelons, salsola or agretti (sold as saltwort or land seaweed) and many new types of kale, sorrel and rocket, as well as micro-greens. There is information about compact varieties of peppers suitable for growing in containers; new, tasty and blight-tolerant tomatoes, as well as those that suit containers and patios; descriptions of the huge increase in decorative types of oriental vegetables (see Joy’s book Oriental Vegetables to get started), and new ranges of garlic and onions. There is also emphasis on dwarfer, more compact pea varieties, as well as many more mini-veg ranges. 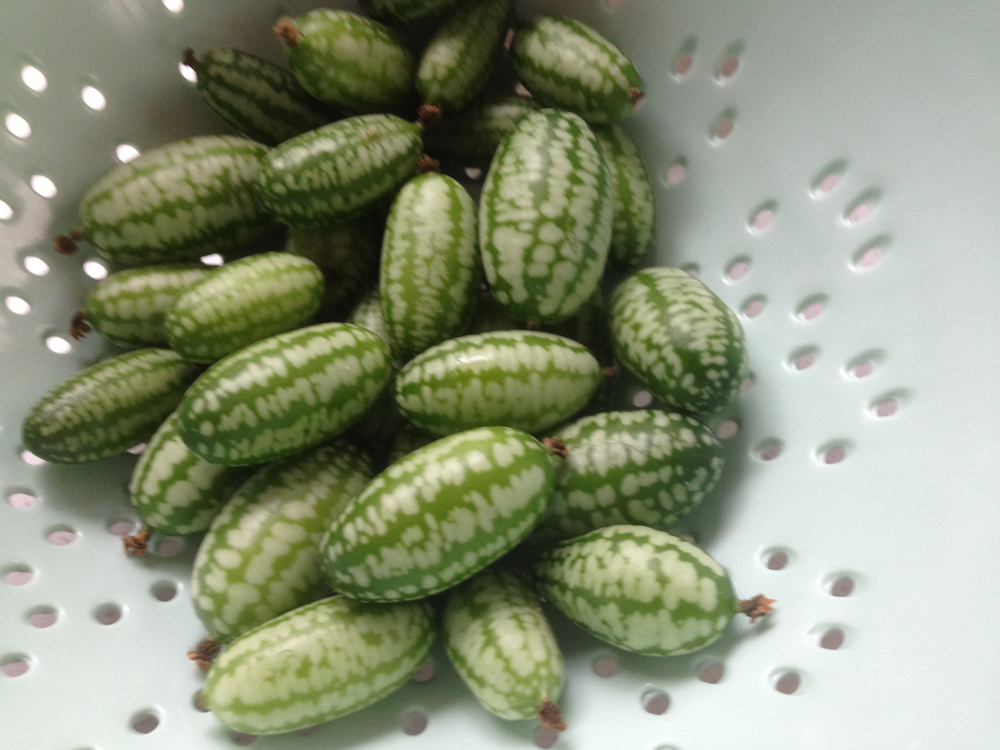 Cucamelons are among the new crops listed in the revised version.

Garden Practicalities covers everything you need to know about techniques, sowing, seed storing and saving, as well as watering, mulching, fertilising and pest and disease control.

And then when you have grown the most delicious leaves Joy invites you to make the most colourful and crunchy salads, often in company with the 17th-century writer and diarist John Evelyn, whose book, Acetaria: a Discourse of Sallets, written in 1699, which Joy claims is as pertinent today as it was when first published, has been at arm’s length across her desk for the past 40 years!

I am off to make a salad now with Joy (and John Evelyn) in mind.

The spines of the two versions of Joy Larkcom’s ‘The Salad Garden’, keep company in my garden library.

My Life with Plants by Roy Lancaster

Next up is plant hero Roy Lancaster. Roy holds the Veitch Memorial Medal, the Victoria Medal of Honour and is a Vice-President of the Royal Horticultural Society. He was made an OBE in 1999 and a CBE in 2014. He has received numerous other awards for his contributions to horticulture and is President of the Hardy Plant Society and also of the Maple Society. These honours notwithstanding he is the most generous of experts, sharing his knowledge and experiences over many years with professionals and amateurs, students and friends. 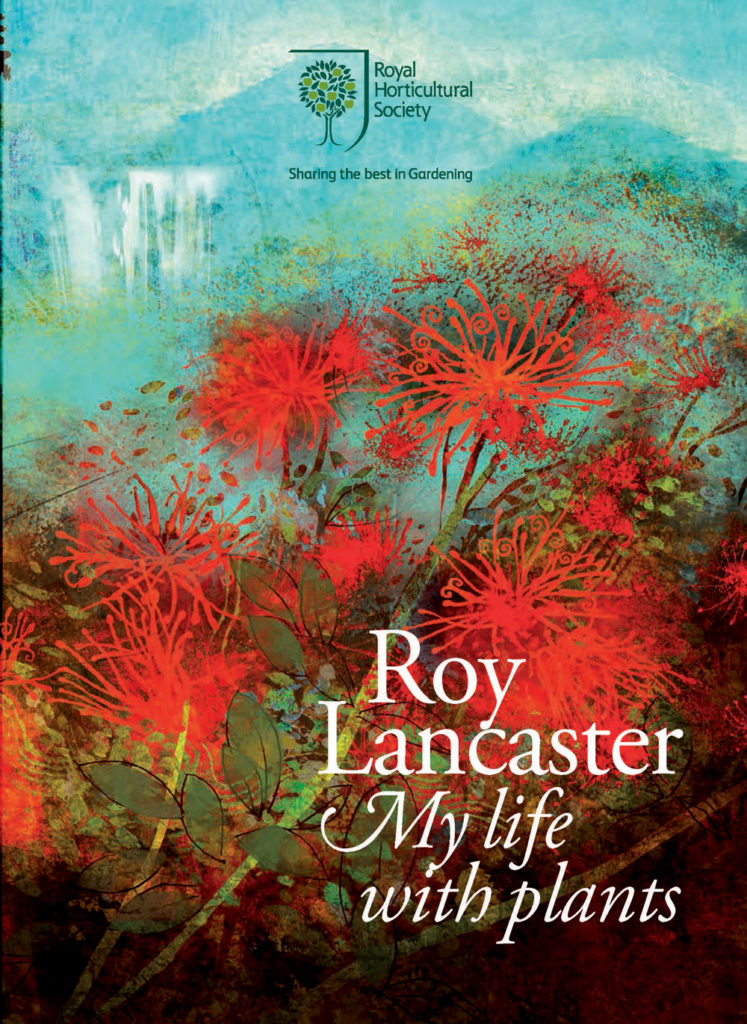 ‘My Life with Plants’ by Roy Lancaster.

Roy Lancaster’s latest book, a memoir of his horticultural life, is My Life with Plants (£25, Filbert Press in association with the RHS, 978 0 99338 925 2). The official launch in March was held at Jermyn’s House at the Hillier Gardens and Arboretum, Hampshire, where Roy had worked over a 22-year period from 1962 to 1980. 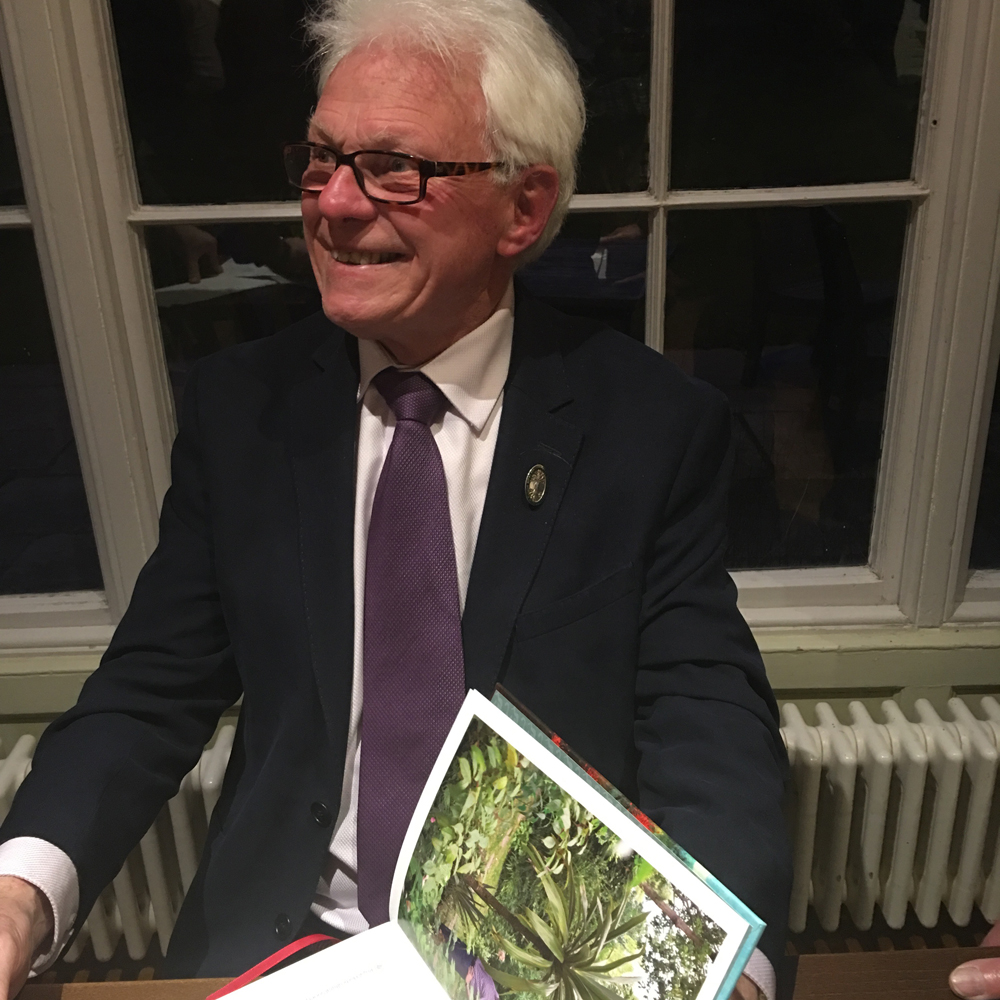 Roy Lancaster signing copies of his book at the recent launch of ‘My Life with Plants’.

Roy has kept notes and diaries throughout his life with plants and it is the immediacy and certainty of these records that comes over so strongly in his memoir. It is easy to hear his distinctive voice aurally and on pages of the book. You know you are on a journey with someone whose curiosity about plants has been converted into knowledge and expertise.

In My Life with Plants Roy takes readers on a journey, which starts in his hometown, Bolton, Lancashire, with his first encounter with a plant that needed identification. This turned out to be Nicotiana rustica, the Mexican tobacco plant, which he found on an allotment near his school – and it was only the second time it had been recorded in the British Isles and a first for Bolton!

From this and other early adventures as a junior member of the Bolton Field Naturalist’s Society, his plant-hunting activities have taken him to far-flung corners of the world, in particular, in the footsteps of his plant-hunting hero, E H Wilson. His first job in horticulture (aged 15) was in the Bolton Parks Department, followed by a two-year stint doing National Service in Malaya. His description of this period of his life is full of the plants, birds and people that he came across in the terrain where his unit was deployed. On his return from Malaya he resumed work at Bolton for a few more years before taking up a place on a two-year student gardeners’ course at Cambridge University Botanic Gardens. It was from there in 1962 that his career took him to Hilliers, where he worked with legendary propagators and became involved in writing Hilliers’ many catalogues, including in 1971, the publication of the first Hillier Manual.

In 1980 Roy left Hilliers and began a freelance career continuing his horticultural writing career, and becoming a consultant, TV presenter, radio panellist and author of many books, including Travels in China and A Plantsman in Nepal.

All through the pages of this book the plants are the major players, but the people who Roy has met along his plant journeys are just as important, and in a few paragraphs he is quickly able to establish why each has made such an impact on him.

Roy is in his 80th year and his enthusiasm for plants is undimmed. In fact, when he is asked where he gets his energy from, his reply is always: “ from the plants”. And many of those plants have come home with him from his travels, so much so that his own garden could almost represent his own travels, filled as it is with the people and the plants that he has encountered in his life with plants. Of the people, none is more important to him than his wife Sue, renowned, among many other attributes, for converting his handwritten notes and scripts into typed and now digital formats. 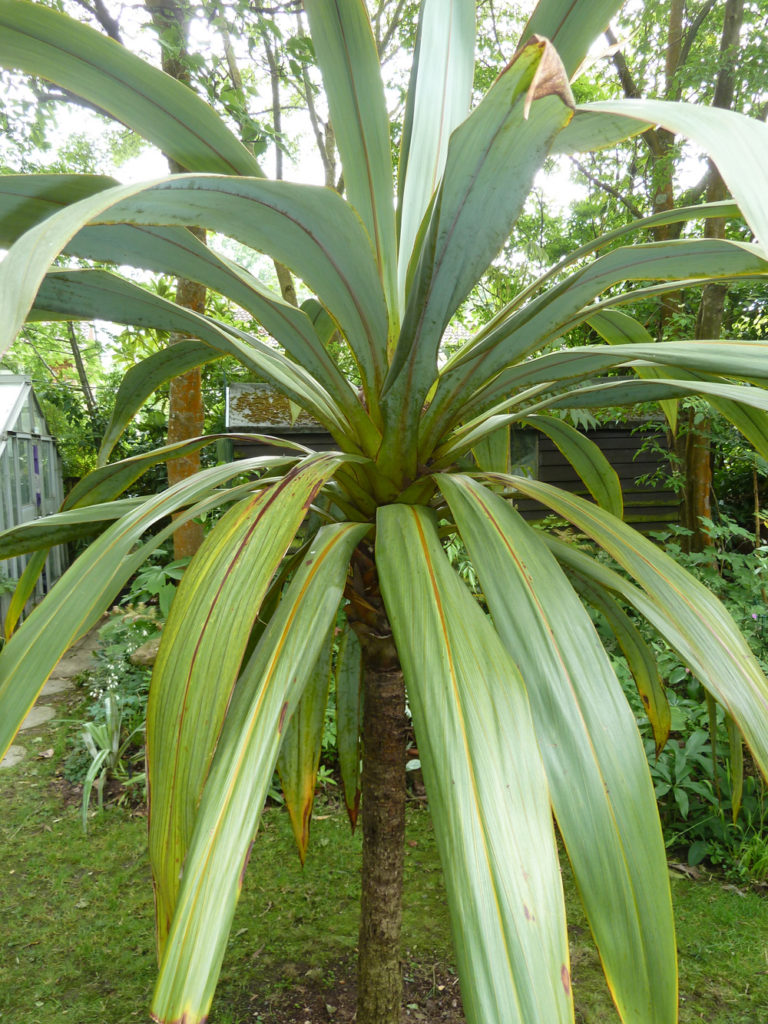 The mountain cabbage tree of New Zealand, Cordyline indivisa. Roy saw it in the wild in the North Island of New Zealand. This specimen is a grand reminder in Roy and Sue’s garden.

Each year groups of horticultural students visit Roy and Sue at the culmination of their studies. He tells them, as he does other visitors (I am one of those fortunate visitors), stories about and descriptions of where the plants come from. For Roy it is always a two-way street: he takes you on the journey, whether in person or in the pages of this book, but it is what he shares and how he shares it that gives him just as much pleasure. As one of my young horticulturist friends tells me, Roy makes you feel that there is still much to discover and that the future is as rich today for young people setting out on their horticultural journeys, as it was for him.

I have not kept such meticulous notes on my travels, nor has my life with plants and gardens been as prestigious, but it certainly does energise and excite me! 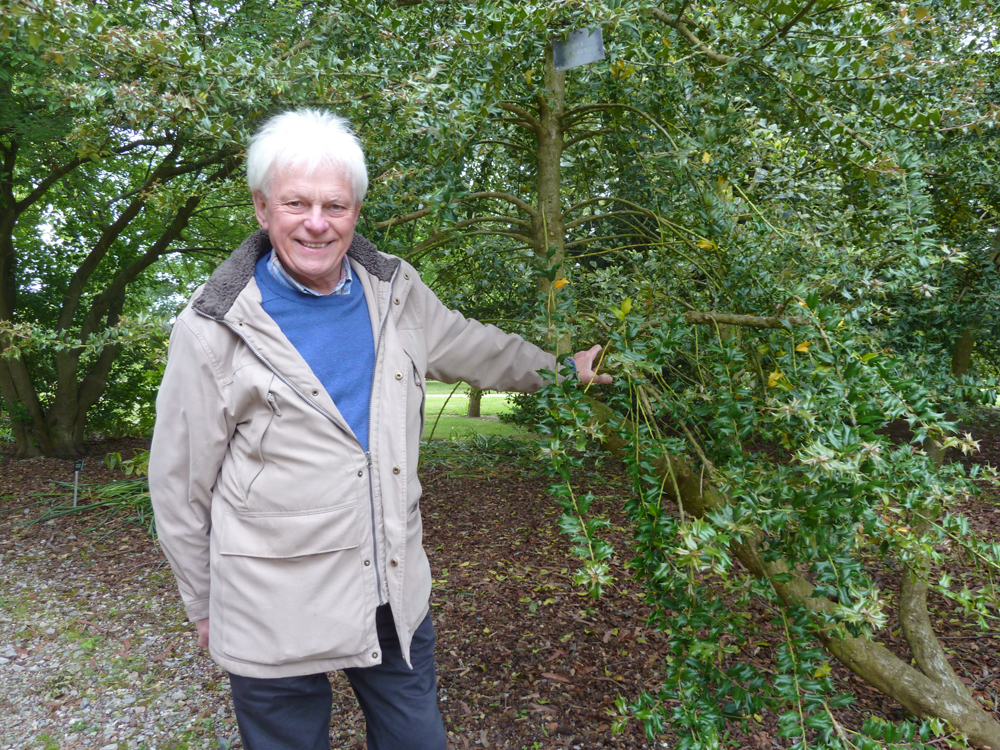 Roy with Ilex spinigera now growing in the Hillier Garden and Arboretum, which he found growing in the Caspian forests of the Elborz Mountains in northern Iran.

Previous Post: « In my grandmother’s vase… a seasonal tale of garden flowers
Next Post: Plant heaven at Hortus Loci in Hook, Hampshire »